Algerians Turn Out In Relaunch Of Protests For Radical Political Change

The pro-democracy Hirak movement continues to roil the country after a yearlong suspension due to Covid restrictions.
By Farid Sait March 3, 2021
Facebook
Twitter
Linkedin
Email 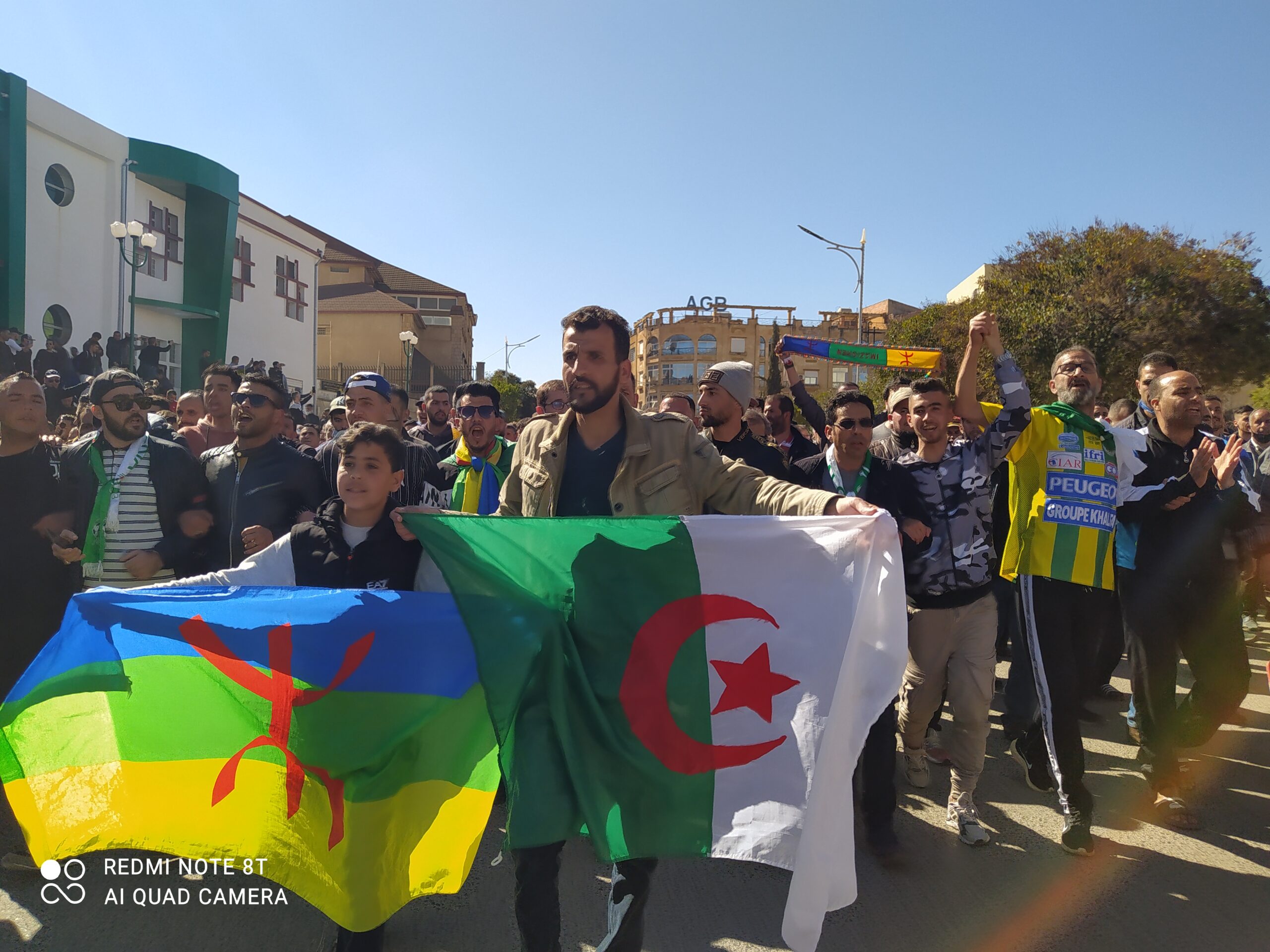 Tens of thousands of protesters, part of the pro-democracy Hirak movement, demonstrate in Bouira against the government of Algeria on Feb. 26. (Farid Sait)

Tens of thousands of Algerians took to the streets March 2 for the second consecutive week, calling for an end to the current political system that gives the military a dominant role in government.

The pro-democracy protest movement, known as the Hirak, continues to roil this North African country long after Covid-19 restrictions forced suspension of demonstrations from last March until last week.  Algerian authorities have responded by deploying thousands of police officers who arrested dozens and used sticks and tear gas to disperse the protesters.

Algerians are demanding a radical change to the current regime, said political activist Karim Tabou, president of the Democratic and Social Union. His party has joined forces with students, Berbers and other political parties, including the Rally for Culture and Democracy, in the protests where 75 percent of participants are young Algerians.

“We want a civil and democratic state, not a military one. We demand the departure of all civilian and military leaders from the current corrupt regime,” Tabou told Zenger News during the demonstrations on Feb. 22.

The role of the military in Algeria’s affairs is a major source of discontent among protesters. The People’s National Army has played a major role in governing since the country’s independence from France in 1962 and is alleged to have committed numerous abuses.

The demonstrations are part of a mobilization that began on Feb. 16, 2019, and quickly became a national movement on Feb. 22 of that year. Protests continued every Tuesday and Friday until March 2020 due to Covid-19 restrictions.

Social media has fueled resentment against the military, with widely shared videos and audio recordings depicting alleged systemic corruption and human rights violations. Some recordings include scenes that are said to show torture and sexual assault by security forces on imprisoned Algerian political activists.

A protester who was sentenced to two years in prison on Feb. 15 and released days later on a presidential pardon said he suffered torture and death threats while in prison.

“I am not happy when I get out of prison. I am not happy because I, my brother Moussa and the young activist Mourad Chelliga and all the Algerian people still suffer from dictatorship and injustice,” 31-year-old Brahim Laâlami told Zenger News.

The government, in its recent communications, maintains that the military is “the backbone of the nation state.”

The People’s National Army has taken a direct hand in the appointment of the president on a number of occasions, and in times of turmoil has helped to restore stability. But Algerians allege that the army has also been the source of electoral fraud to ensure its preferred candidates took office without regard for the wishes of citizens.

“We are asking them to be accountable to us and to the politicians they have designated as extras. They must appear in court for their corruption, crimes and mismanagement scandals,” said Latli Fathi and Massi Derni, who were among a group of angry protesters who met with Zenger News at a peaceful march on Feb. 26 in Bouira. “Let the people decide their own fate.”

Opponents also cite the current close relationship between France and the government of President Abdelmadjid Tebboune as another cause for concern. The former colonial power continues to exercise a significant control over the country’s natural resources, including its oil and gas wealth, through its multinational corporations.

Other causes for discontent include the high cost of living, an unemployment rate of 11.5 percent and deteriorating living conditions. More than 20 percent of the 44 million people live in poverty, despite the country’s substantial earnings from oil and gas exports. In 2019, the value of petroleum exports in Algeria corresponded to over $22 billion, data from Statista shows.

The economic crisis owing in large part to the pandemic has led hundreds of young Algerians to leave on makeshift boats to cross the Mediterranean and head to Europe in hopes of a better life. But many others who remain have committed themselves to reform.

“We are determined to continue our peaceful fight until the corrupt who plundered the country’s wealth leave, and then we can establish a state of law and democracy,” said Tabou.

In response to the protests, President Tebboune last year declared Feb. 22, marking the first anniversary of the Hirak movement, a “national day of fraternity and cohesion between the people and the Army for democracy.”

“Those who tried to instrumentalize the second anniversary of the Hirak popular movement failed and suffered a severe setback from the Algerian people, who celebrated this date in a peaceful and civilized manner,” Belhimer said.

The president dissolved the lower house of parliament on Feb. 18 and called for early elections in the first steps toward a peaceful political transition. The president also reshuffled some ministries and granted a “presidential pardon” to more than 50 jailed activists of the Hirak movement that forced his predecessor, Abdelaziz Bouteflika, from power in 2019.

The measures so far have done little to pacify protesters, who continue to demonstrate for change.