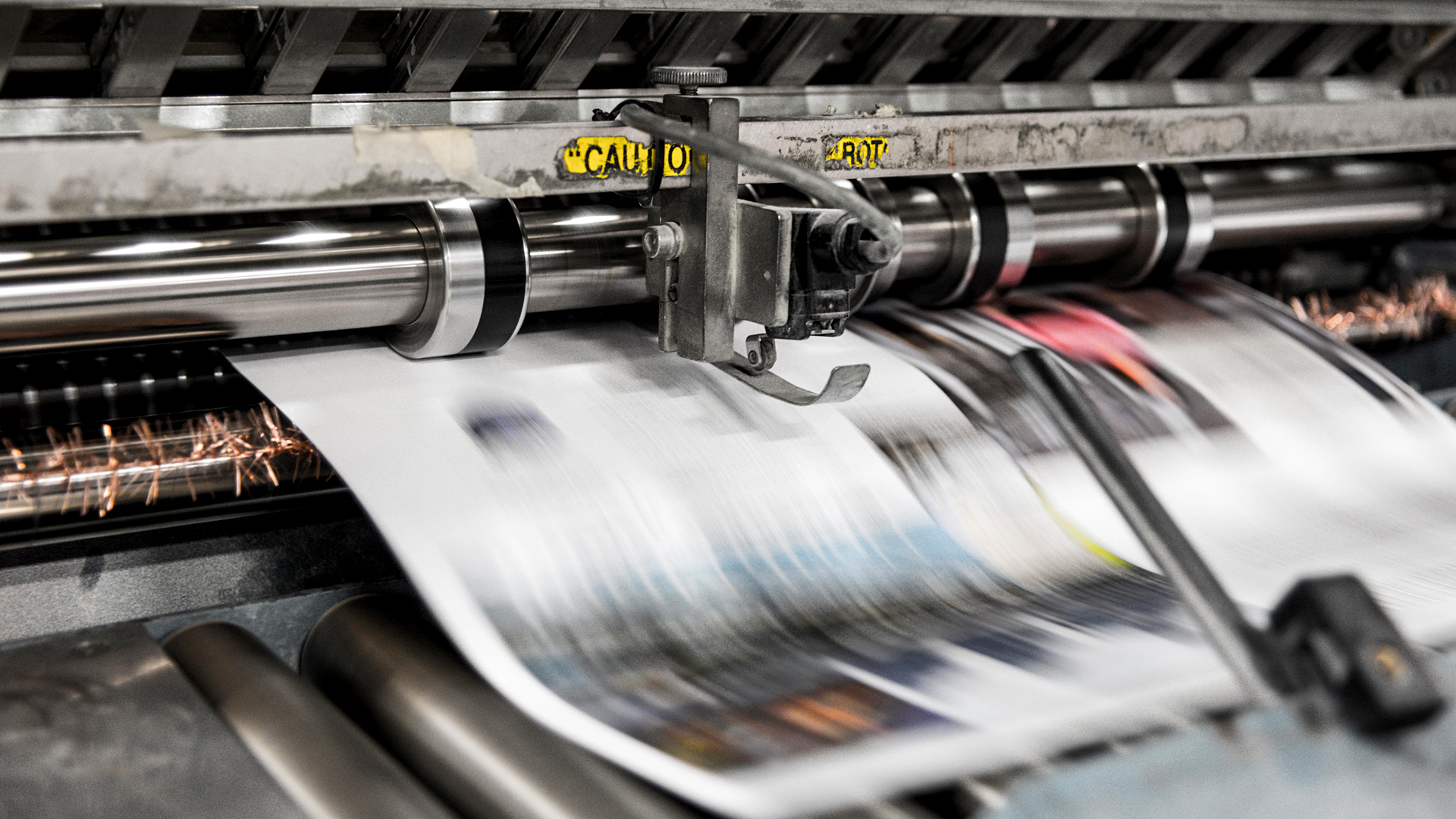 PUNE, India — Australia recently passed a new law that mandates tech giants such as Facebook and Google to pay news publishers for content used on news feeds and search results. The law, aimed at leveling the power imbalance between news outlets and tech platforms, gives such outlets greater negotiating power.

The Indian Newspaper Society, an apex body of all print publishers, wrote to Google asking it to increase the publishers’ share of advertising revenue to 85 percent.

This means for every dollar, the newspaper body wants 85 cents.

“We don’t know how much percent we are getting right now, it’s opaque. Google just gives us an amount at the end of the month, it’s a very complex ecosystem. We are saying that we want a higher share of the advertising. The whole ad network is completely opaque from Google, nobody knows except Google,” Mathew said.

The newspaper body also asked Google to give “greater prominence” to news from registered news publishers to tackle fake news, “as Google picks up content from several sites that are not credible,” leading to misinformation. 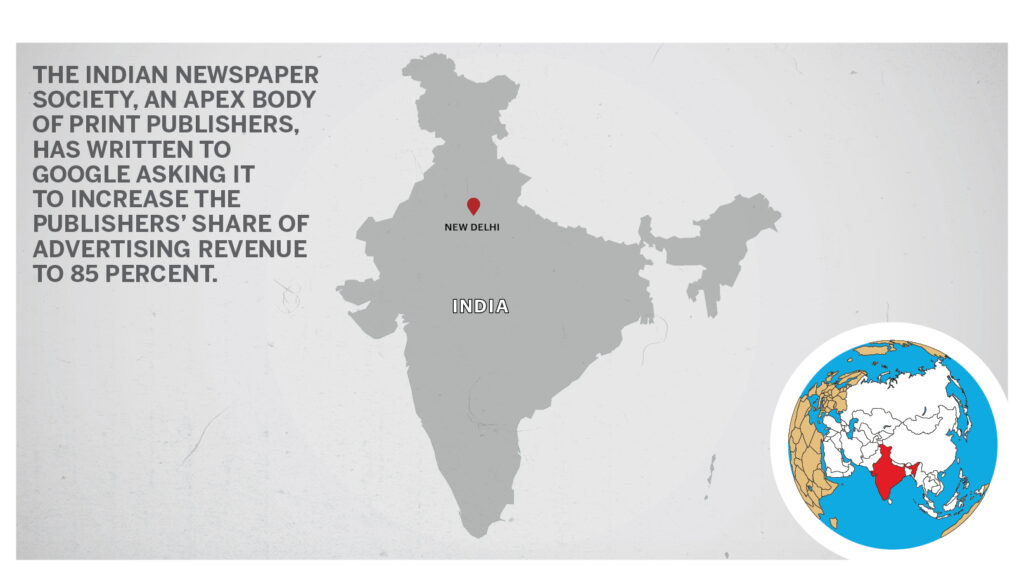 It also noted that Google has agreed to “better compensate and pay publishers” in France, the European Union, and Australia.

Google, however, did not respond to a request for comment.

Mathew said there’s a difference in transparency in the digital medium when compared with television and newspaper.

“If you go to a news site, it will sell part of the inventory to Google. But we don’t get any data on it. In newspapers or television, it’s very transparent. Newspapers track readership and circulation, and television has viewership. But in digital there is no one common measuring system,” said Mathew.

The demand comes at a time when Indian newspapers are struggling to stay afloat during the pandemic. A large migration happened as readers moved to digital media because papers could not be distributed during the lockdown and advertising revenues plunged.

Prominent newspapers such as the Mumbai Mirror, DNA, etc were some of the outlets that shuttered doors. Hundreds of journalists were laid off en masse.

Print advertising expenditure, which was the second-largest ad medium in 2019, has been the biggest casualty in 2020, according to the Pitch Madison advertising report 2021.

“The medium that was worst hit was print which saw negative growth in absolute terms by INR 8,120 crore and in percentage terms by 40.5 percent,” the report notes. “It is apparent that digital and television have recovered very well and are on a growth path, but one cannot say that for print, radio, and outdoor advertising, which has a lot of catching up to do.”

Advertising revenue contributed to about 27 percent of Google India’s total turnover for the period ended March 31, 2020, according to a filing from company research platform Tofler.

While Google’s parent Alphabet Inc saw an 8 percent fall in advertising revenue for the second quarter ended June 30, 2020 — the first time since it went public in 2014 — the search giant’s ad revenues rose about 22 percent during its fourth quarter-ended Dec. 31, 2020.

“Facebook and Google are very different,” said Vivekanand Subbaraman, research analyst at Ambit Capital. “Google indexes the world’s information, which includes news. So, news is essential to Google. If they want to be an effective service, they need to have access to news.”

“Let’s say I am looking for progress on the vaccine trials, if I search on Google and if it doesn’t capture publications that talk about vaccine trials, then Google will be an ineffective search engine for me and I might shift to Bing or DuckDuckGo. For Google, it’s a different issue as Google needs news.”

Facebook and Google fought against Australia’s proposed regulation before it was amended after talks with the companies. After Australia proposed the new media Bargaining law, Facebook restricted Australian users and publishers from viewing or sharing local and international news. It also blocked all its users from accessing and sharing links to Australian news sources. Google threatened to shut its search engine in Australia. Following negotiations with the government, Facebook reinstated access to news.

Facebook is now planning to invest at least $1 billion in the news industry over the next three years, similar to Google’s pledge to invest a similar amount in partnerships with news publishers.

The mutually beneficial relationship between publishers and big technology companies is here to stay, which is why there is increasing focus on regulation to even the scales. The Australian law is the first-of-its-kind in the world and is a way forward for media publishers.

“It’s not about how small or big media companies are, the big ones will obviously negotiate. The small ones as such don’t have a lot of revenue implications. And, there are safeguards in place in Australia,” Ashutosh Sharma, vice-president and research director at Forrester Research in India, told Zenger News.

“I don’t believe the market in India is significantly different in terms of the mix. I don’t rule out the possibility of something like that coming. Australia has given publishing media precedence with which to go to these large tech companies and negotiate better for themselves,” he said.

Sharma said the distribution and aggregation engines have a value.

“More and more people go to these aggregators, more so than news sites themselves. It’s not possible for news sites to have that big a reach.”

India has recently waded into regulating social media and digital platforms. India revamped the information technology rules to bring social, digital media, and streaming platforms under its ambit. The Advertising Standards Council of India has made it mandatory for influencers to state when their updates have paid content.

While India’s newspaper publishing body has called on Google to give precedence to credible news publishers to combat fake news, governments across the world have been trying to rein in misinformation.

A fight that was particularly visible in the throes of the Covid-19 crisis. In March 2020, India’s ministry of electronics and information technology issued an advisory against fake news on the virus.

“It has been reported in the media that there is a trend of circulation of misinformation/false news and sharing anonymous data related to the coronavirus in various social media platforms, creating panic among the public,” the advisory notes.

The ministry asked social media platforms to promote authentic information, initiate awareness campaigns and remove fake news relating to the crisis. Australia paving the way for a more equitable relationship between publishers and technology firms points to the expanding regulation in the way news is consumed digitally.

“The pandemic and the current digital business model have been unfair to publishers, making it unviable for the print media industry,” the newspaper’s apex body, which has 800 members, said.