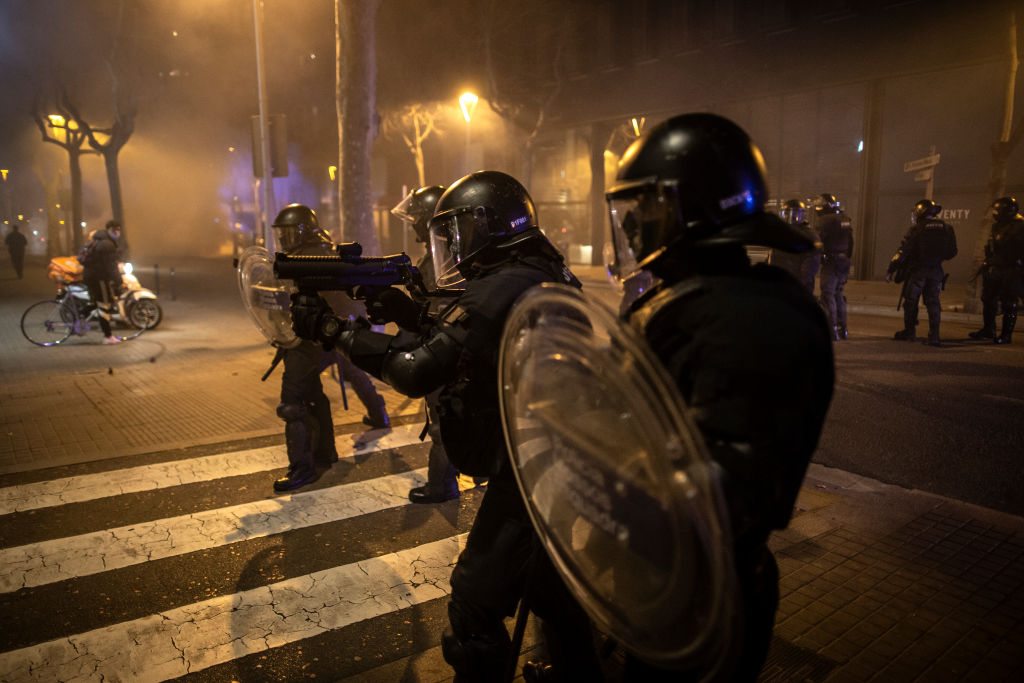 A riot policeman prepares to fire a rubber bullet toward protestors during clashes on the fifth night of violent demonstrations condemning the arrest of rap artist Pablo Hasel on February 20, 2021 in Barcelona, Spain. (Finbarr O'Reilly/Getty Images)

Nearly 200 people have been arrested and at least 200 have been injured during weeks-long protests across Spain demanding rapper Pablo Hasel’s release from prison.

To date, 189 people have been arrested since protests began on Feb. 16 in hundreds of cities over Hasel’s imprisonment on charges of exalting terrorism and insulting the country’s monarchy on his Twitter feed and in several of his songs. He is serving a nine-month sentence in the contentious free-speech case.

“We did not expect so many people to take to the streets and in the way they have,” said Adam Camon, a member of Pablo Hasel’s Platform for Freedom.

In Lleida, on March 1, a group of elderly people chained themselves to City Hall, demanding “an end to the repression of young people” and that agents responsible for egregious actions be purged from the Mossos d’Esquadra, the Catalan police.

A large demonstration in support of Hasel is being planned for March 20 in cities throughout Spain.

“We must intensify the organization and the fight in the streets, keep pressing until Hasel is released. This is a fight for democratic freedoms; those who do not have a decent job are imprisoned for some tweets or are evicted from their home,” said Camon.

Camon said that Hasel’s imprisonment “has been the straw that broke the camel’s back,” noting that the reasons for the protests encompass the “problems suffered by the working class and, specifically, the youth.” He referred to Spain’s rising unemployment, which in February numbered 4 million people.

So far, the Mossos d’Esquadra have arrested 137 people in Catalonia. In the Basque Country, one person has been arrested, and In the rest of Spain, according to reports from the Ministry of the Interior, 51 people have been arrested.

Among the 200 people injured, some of them seriously, 91 were in Catalonia, according to the Department of Communication of the Emergency Medical Services there.

Dozens of detainees have reported being beaten by police during their arrest and detention at the police station.

Alejandra Matamoros, Pablo Hasel’s lawyer, assisted four minors between the ages of 16 and 17 who were at the police station after being arrested during the demonstration on Feb. 17 in Madrid. Matamoros said that the police kept them at the station for as long as possible — the maximum of 24 hours allowed for minors. She said that the teens told her that they had suffered physical attacks, including being punched and slapped by police officers.

“Minors were the last to be allowed to leave the police station, and those who reported the most abuse, and this is not usual,” said Matamoros. She was denounced by the Unified Police Union on Feb. 23 for talking on several TV programs about “the torture that is committed day in and day out also in the civil guard barracks and in all the corps of state security.”

“This complaint is another sign that the right to freedom of expression does not exist in Spain, and it does not exist for lawyers, either,” she said.

The same day that Pablo Hasel was taken to prison, on Feb. 16, thousands demonstrated in Lleida, where the rapper lives, and in Barcelona. Eight people were arrested and several were injured, including a 19-year-old woman who lost an eye after she was hit by a foam bullet fired by an agent of the Mossos d’Esquadra.

That incident revived the debate on police weapons in Catalonia. The Parliament of Catalonia in 2014 prohibited police use of rubber bullets, replacing them with supposedly less dangerous foam bullets. Rubber bullets in Spain are reported to have caused at least 44 serious injuries and 23 deaths. Foam bullets, also known as sponge grenades, are described as bullet-shaped plastic rounds with a dense foam nose.

Anaïs Franquesa, a member of the Catalan organization Iridia, whose focus is the defense of human rights, denounced Catalan police for not publishing the protocol for the use of foam bullets. Iridia and Amnesty International in Catalonia have demanded that the protocol be made public.

“The rubber bullets are precise, they do not bounce; where it is aimed, it is hit. So it can only be understood that there is a person injured in the eye because the policeman has aimed at the head, and that means that it is being misused and this is very serious,” said Franquesa. He also said that Catalan police do not have monitoring and control mechanisms that would allow them to know which agent has fired which bullet, when and for what reason.

The case of the 19-year-old woman who lost an eye, and others, such as that of a 25-year-old who was reportedly beaten to unconsciousness by police, have sparked debate about police violence, and the negotiations around forming a new Catalan government.

In the Catalan elections on Feb. 14, pro-independence parties increased their parliamentary majority to 33 seats. The two parties with the most votes were the pro-independence Esquerra Republicana de Catalunya and the Socialist Party — tied with 33 seats. They are in negotiations with the rest of the parties to form a government. Another pro-independence and anti-capitalist party, the Popular Unity Candidacy, with nine seats, has proposed in exchange for its support for Esquerra Republicana de Catalunya a moratorium on the use of rubber bullets.

Beyond that moratorium, “we need a more in-depth debate on the public-order model,” said Franquesa.