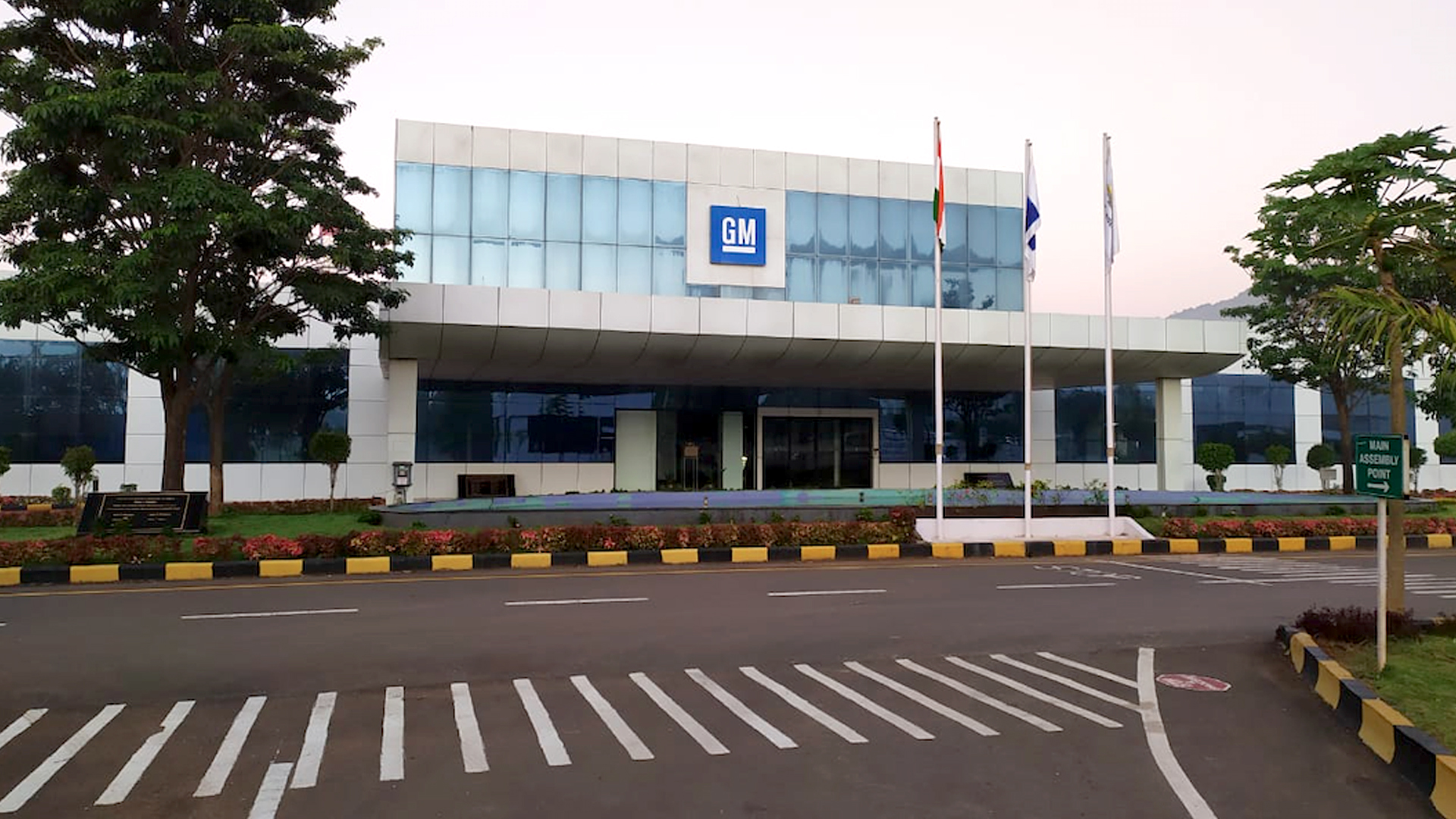 The General Motors plant in Talegaon, Maharashtra, is about to shut down. (Chandrakanth Alsundkar)

PUNE, India — Once a manufacturer of airplanes, machine guns, tanks, and even shells for the Allied forces during the second world war, America’s General Motors, one of the world’s biggest automobile companies, is finding it difficult to continue its operations in India — one among the world’s top five car producers.

Following its two-decade run in India, General Motors decided to fold its operations with the closure of its Halol plant in India’s western state of Gujarat in 2017.

Its other plant in Talegaon, a small city in the western state of Maharashtra, is staring at a similar fate after the auto major decided to shut it down in December 2020.

“My son studied in an English-medium school, but due to the sudden decision of closure of the plant, he had to leave that school,” said Chandrakant Shamrao Alsundkar, a 35-year-old employee at the Talegaon plant. “We cannot afford such costly education anymore.”

General Motors has offered a voluntary severance package to all the 1,578 full-time workers at the plant.

The employees not only rejected the voluntary severance package but also dragged the U.S. carmaker to Bombay High Court against its decision to suddenly close the plant. Protests have since erupted at the plant. 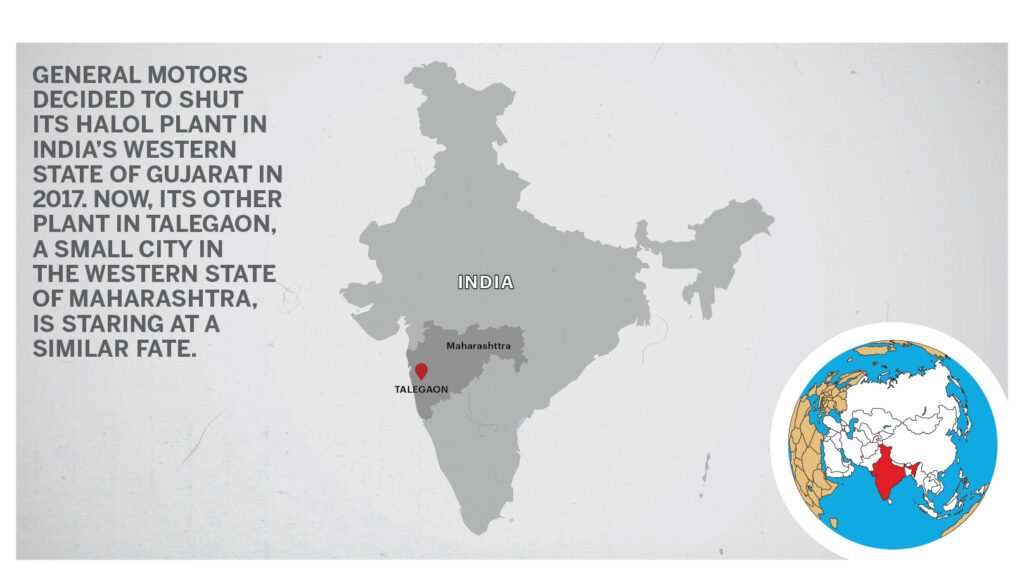 On Feb. 19, General Motors issued a letter to the employees protesting at the site, asking them to either accept the voluntary severance package issued by the company by Feb. 23 or face a lawsuit.

“Confrontation and litigation are not productive and almost never results in a win-win situation for the parties, especially since General Motors India has no option but to exit its operation in India,” he wrote.

The Talegaon plant started in 2007, and manufactured cars only for exports till 2017, after which the company decided to shut sales operations in India. Cars were mostly exported to Latin American countries, especially Mexico and Peru, and a few Asian countries such as South Korea and Vietnam.

Some employees Zenger News spoke to said when they asked the firm the reason for the sudden decision, it told them “there were consistent monetary losses and failures of products since its journey began”. Zenger News reached out to General Motors but got a standard statement in reply.

“This is a plan plotted by General Motors,” said Sandip Shridhar Bhegade, a worker and president of the General Motors Employees Union. “They will gradually cut off the employees once the plant shuts down.”

On being asked about the welfare of the employees, General Motors India refused to comment.

“In most cases, the employee is the sole earner of the family who has other members to look after and loans to repay,” said Bhegade.

Instead of the voluntary severance package, the workers want to continue their service. They are citing the Memorandum of Settlement signed between the employees union and General Motors India on March 23, 2017, which facilitates a transfer of ownership of the plant to prevent it from shutting down.

Bhegade said the closure application filed by General Motors with the Maharashtra government states that certain manufacturing would continue past the date of closure.

“The employees’ union met Maharashtra’s Labor Minister Dilip Walse-Patil,” he said. “We are trying to talk to the management for the past eight months, and when things did not resolve, we decided to move to the Bombay High Court on Oct. 24, 2020, to take up General Motor’s closure application.” An application was filed on Nov. 4, 2020.

The state government of Maharashtra later rejected the closure application and instructed the company to run the plant and keep paying its employees.

“This is a false closure, as the company is not running in losses for the past three years. It is only doing this to get rid of the employees,” said Bhegade. “The company should sell its employees also. In today’s employment scenario in India, most of us will be jobless if this plant closes.”

General Motors, the parent company, signed a contract with Great Wall Motors, China’s automobile manufacturer, to sell the Indian entity, which included the Talegaon plant. The change of ownership was supposed to be complete by December 2020 and production was to begin early this year.

However, India did not provide the foreign direct investment approval to Great Wall Motors within the promised deadline of the signing of the contract, which was put to hold due to tension at the Line of Actual Control between India and China.

“Indian law on employee transfer is primarily covered under Section 25 under the Industrial Disputes Act, 1947, which will be replaced by the Industrial Relations Code, 2020,” Vikram Shroff, leader HR laws at law firm Nishith Desai Associates, told Zenger News. “The provision applies in cases of transfer of ownership or management of an undertaking, and does not relate to closing down of a company. There are, however, certain other labor law provisions relating to compensation and government approvals for the closure of an undertaking that may need to be complied with.”

“For employment termination, besides other requirements, notice pay under the labor law is one month’s salary,” he said. “The severance amount is calculated at 15 days’ salary per year of service.”

But the workers, as they claim, stand to lose in such legal tussles.

“Now, when I want to switch him [my son] to a Marathi-medium school, the administration is rejecting my child since he will not be able to cope up with the vernacular language that is taught in the school. This might end my son’s career,” said Alsundkar.