What A Grind: Traveling Knife Sharpeners Fading Away 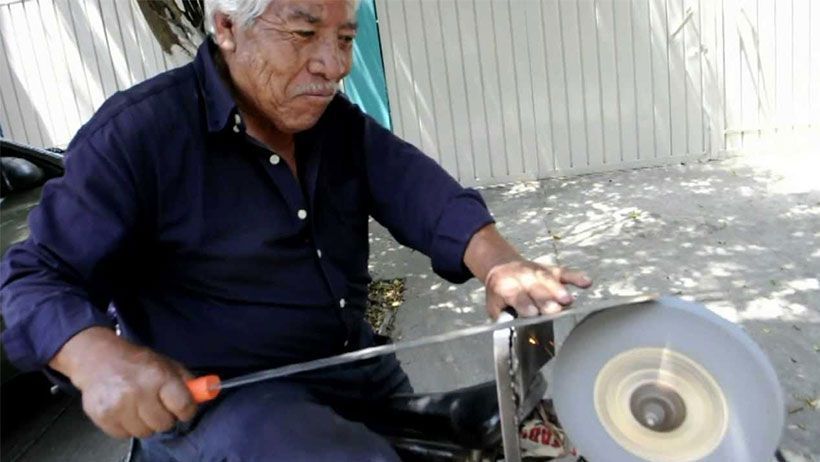 The traveling knife sharpener is very proud of his work. This ancient craft is still practiced in Mexico, although it is disappearing. (Christian Valera Rebolledo/Café Words)

When a reed flute whistles in the distance, Mexicans born before the 1990s may know that an expert in the art of knife grinding could be around. For many, the knife grinders’ whistle triggers as many memories as the music of a typewriter or the tune of a train crossing.

Upon arrival, the knife grinder (also known as a sharpener) will hone the client’s knives using a round whetstone that rotates when the cutler pedals a stationary bicycle.

Knife grinding has long been a respected trade in Mexico.

However, it’s becoming harder to find such sharpeners on the streets today, especially in big cities. Contemporary lifestyle may be killing the craft.

“We live in the era of consumerism and, if a pair of scissors or a knife no longer works, we buy another,” said Pérez.

The trade might have originated in Europe centuries ago, with men walking from house to house, sharpening knives on a whetstone that they carried on their backs. The artifact evolved, and sharpeners could roll it around like a wheel, although it was still awkward to drag.

The 20th century brought the solution for the burden of carrying the stone: sharpeners discovered they could move it on a bicycle, truck or motorcycle.

Knife grinding is considered an art. One has to grab the knife by the handle, moving the blade back and forth to hone it. The trick is to place the knife so it barely touches the whetstone. This way, one can sharpen the utensil without ruining it.

“It’s not easy,” says Genaro de Jesús Álvarez, the owner of a machine repair shop in Veracruz and a knife grinder himself. “You have to practice a lot to be quick and effective. Those who made a living from sharpening used to walk all day; they went throughout the whole market offering their services: scissors, knives, cutting instruments. [They worked] not only for restaurant owners but also for merchants.”

Several art pieces have highlighted the beauty of this trade, including Francisco Goya’s oil painting “The Knife Grinder” (1812). Russian avant-garde painter Kazimir Malevich expressed his admiration for the craft in “The Knife Grinder,” which he completed in 1912.

Writers have also fallen under the sharpeners’ spell as well. Mexican novelist Elena Poniatowska mentioned the trade as a symbolic one in her 1994 work, “Luz y luna, las lunitas.”