Attendees at a conservative gathering gave Trump a 97% approval rating, but one-third declined to back a hypothetical 2024 run.
By David Martosko March 1, 2021
Facebook
Twitter
Linkedin
Email 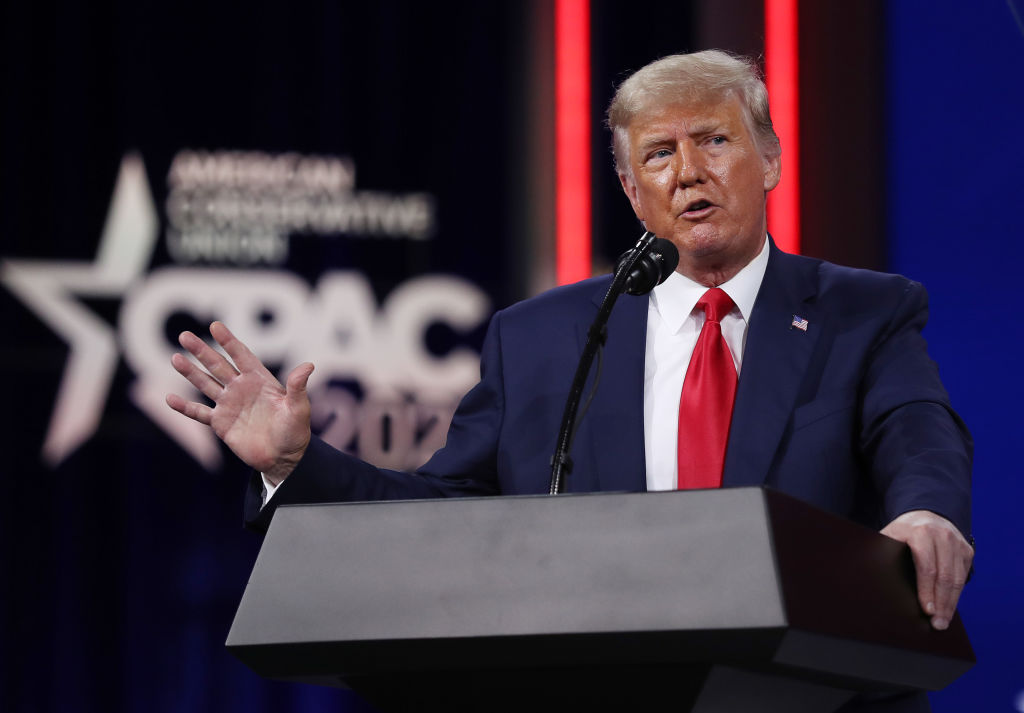 ORLANDO, Fla. — Donald J. Trump said Sunday that he might run for the White House a third time in the hope of defeating his successor, President Joseph R. Biden Jr. The former president claimed at the annual Conservative Political Action Conference that Biden’s permissive immigration policy alone should cost him the White House in 2024 and turn Democrats into a weak minority party.

“Biden has failed in his number one duty as chief executive: enforcing America’s laws,” Trump said, beginning the second act of his political life with a series of punches in Orlando, Fla. “This alone should be reason enough for Democrats to suffer withering losses in the midterms, and to lose the White House decisively four years from now.” 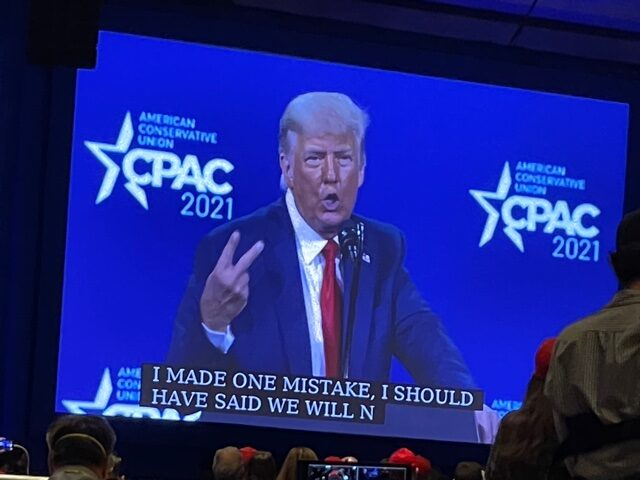 Former President Donald Trump speaks to a packed room of his loyal followers at the Conservative Political Action Conference held in the Hyatt Regency on Feb. 28, 2021 in Orlando, Fla. Trump teased a third White House run in 2024. (Claire Swift/Zenger News)

Trump has argued for months, to no avail, that widespread fraud cost him the November 2020 election. He said Sunday that Republican gains in the House of Representatives were an indication that he was cheated. “I received almost 1.5 million more votes than all of the Republican House candidates combined. So how the hell is it possible that we lost? It’s not possible. I got more votes,” he said.

‘Name-checking a new fundraising vehicle call the Save America PAC, Trump pledged to help Republicans reclaim control of both houses of Congress. “And then a Republican president will make a triumphant return to the White House. And I wonder who that will be,” he said with a smile. “I wonder who that will be. Who, who, who will that be, I wonder?”

Trump turned the winter and spring of 2015 into a political guessing game, teasing the idea of an unconventional run for office while he shrugged off questions about whether he would actually announce his candidacy.

The public didn’t know that he had already secured a trademark for his signature “Make America Great Again” slogan, giving him exclusive use of it for political fundraising and merchandising. He applied for the trademark in November 2012, less than two weeks after President Barack H. Obama defeated Republican Mitt Romney.

This time his public dalliance with another White House run will give him a string of opportunities to argue for election reform and insist he won in 2020.

Trump outlined a platform on Sunday that would restore the U.S. to mid-20th century standards: a single Election Day with no opportunity to vote early, no widespread use of U.S. Mail to cast ballots, a less permissive list of justifications for voting with an absentee ballot, a documented chain of custody for every ballot, citizenship verification and an ID requirement at the polls.

The list of red-meat issues in Trump’s speech was a menu fit for the blue-collar political movement he commanded for nearly six years, one that he said “is far from being over” despite his exile away from the levers of power.

Trump hammered home his outrage about illegal immigration, energy prices, voter ID campaigns, the Biden White House’s more accommodating attitude toward China, and the fate of sports leagues when women and girls are forced to compete against transgender Americans who are biologically male and muscle-bound.

“The records that stood for years, even decades, are now being smashed with ease. Smashed. If this does not change, women’s sports as we know it will die. They’ll end. It will end,” Trump said.

And in a nod to intensifying discontent among middle-class families facing a second year of school-by-Zoom, he demanded Biden stop “cruelly keeping our children locked in their homes” and instead send teachers back to work.

“There’s no reason whatsoever why the vast majority of young Americans should not be back in school immediately,” he said. “The only reason that most parents do not have that choice is because Joe Biden sold out America’s children to the teachers unions. His position is morally inexcusable. You know that.”

Trump earned a 97 percent approval rating in a straw poll held at the three-day conference, according to the American Conservative Union, the annual event’s organizer since 1974. But when asked whether he should run for president again in 2024, just 68 percent said yes. Trump polled first among potential Republican primary candidates, with 55 percent support. Florida Gov. Ron DeSantis was second with 21 percent. With Trump sitting out of a hypothetical contest, DeSantis surged to 43 percent.

He also complained about “cancel culture,” saying conservatives have been denied platforms to promote their political views online and elsewhere. “We’re not allowed to talk,” he said, as more than 5,000 people, at least four cable TV channels and most of the online news media focused on his words.

Sunday marked the end of the longest period of time since January 2015 without a public appearance from Trump. His absence had largely been the result of Twitter and Facebook stripping him of his accounts during his lame duck months.

On Sunday he said the federal government should end special protections extended to social media platforms in the Communications Decency Act. They are exempt from legal liability for what their users say and write because the law sees them as neutral providers of a platform, not publishers who decide what can go online.

But with Trump and others losing their accounts, conservatives say, the social networks should forfeit their special status.

”If the federal government refuses to act,” Trump said, “then [in] every state in the union, where we have the votes, which is a lot of them, big tech giants like Twitter, Google and Facebook should be punished with major sanctions whenever they silence conservative voices.”