This southern Indian town will soon get an airport, which is expected to boost tourism.
By Neeti Jaychander March 1, 2021
Facebook
Twitter
Linkedin
Email 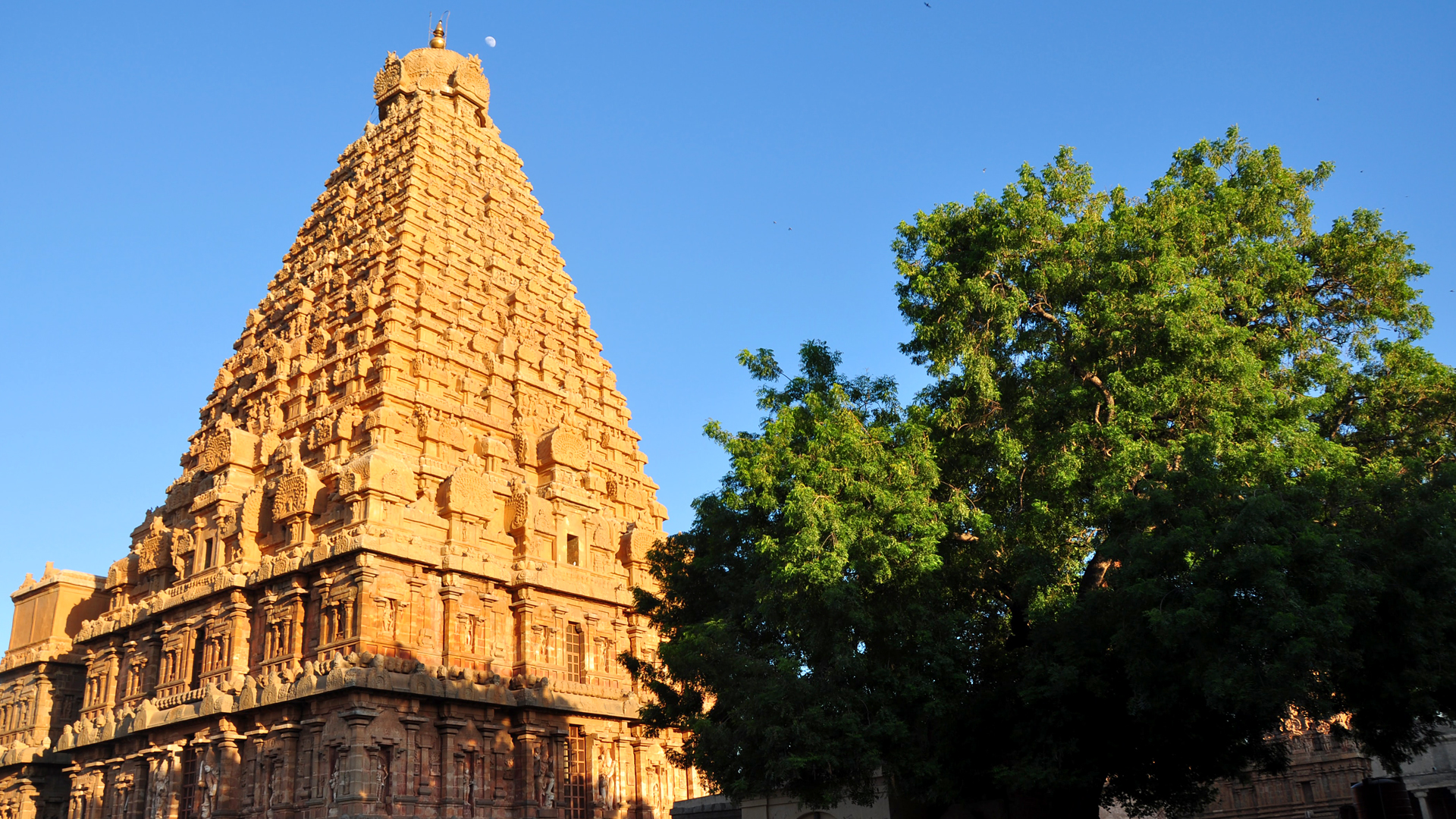 Thanjavur has plenty to offer the culture aficionado (Avinash Uppuluri/Unsplash)

Walking through the streets of Thanjavur, or Tanjore as it was formerly called, is like taking a stroll back in time. The heritage of this medieval Tamil Nadu town has been carefully preserved, with residents taking pride in maintaining 1,000-year-old structures and pursuing professions centered on the town’s cultural offerings.

Until now, the absence of an airport in the town made it inconvenient for tourists to visit. The nearest airport is at Trichy, a town 30 miles and an hour away by road. All that is set to change in a few months.

The Airports Authority of India is developing an airport in Thanjavur. It will be built at a cost of INR 50.59 crores (About $68 million U.S.), with the intention of ensuring that air visitors have last-mile connectivity. This has been a long-standing demand of tourists and tour operators, and the airport is likely to be completed by the end of the year.

One of the town’s biggest attractions is the Brihadeeshwara Temple that is considered to be an architectural marvel. Built in 1010 AD by the king Rajaraja Chola from the erstwhile Chola dynasty that once ruled Tamil Nadu, the temple celebrated its 1,000th anniversary in 2010. 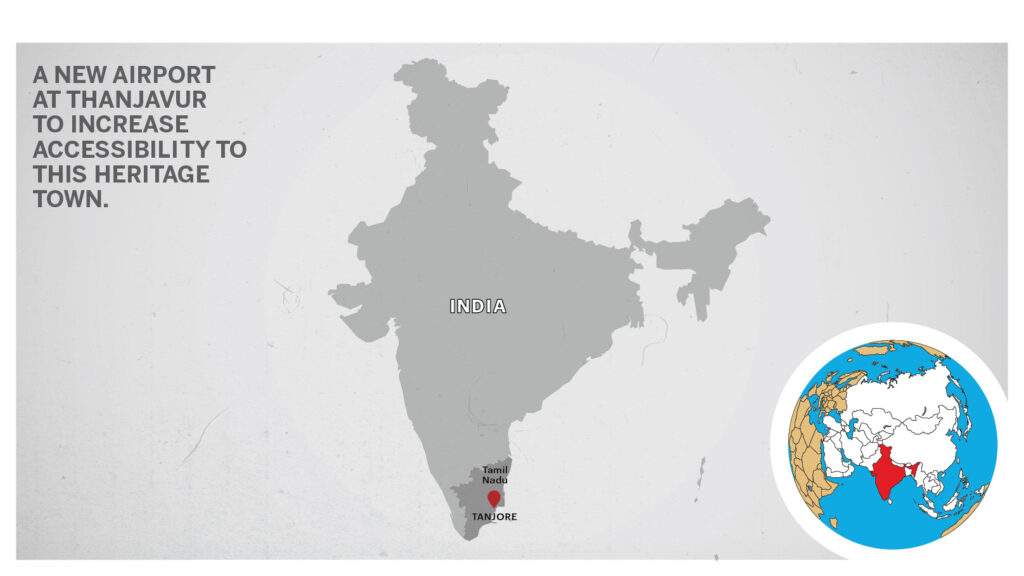 It is one of the four temples in Tamil Nadu recognized by UNESCO as a World Heritage Site. Made in the typical style of Dravidian architecture, which is characterized by geometrical towers, the use of pillars and porches, and the use of indigenously sourced rock, the temple is so huge, locals just call it the “Periya Kovil” or the“Big Temple.”

The temple has been built by using interlocking techniques, where one rock is fitted into the other. The foundation of the structure is only 5 feet deep and filled with mud, yet it has balanced a whopping 80 tons of weight for over millennia now.

“The ‘vimana’ or tower on top of the temple’s sanctum is made of monolithic granite — the whole thing has been capped by a single piece of rock — and is 16-stories high,” said Thilaka Raja, a guide for over 40 years, who is accredited with the Tamil Nadu Tourism Department.

“The inside of the temple is exquisite with frescoes as well as 108 hand-carved stone sculptures depicting women in different Bharatanatyam (classical south Indian dance) postures.”

The Thanjavur Maratha Palace Museum is another site famous for its collection of bronzes dating back to the Chola dynasty. These millennium-old bronze figurines and statues have been made using the lost wax method, in which the metal sculpture is cast in a mold made of wax. The figures are from southern Indian folklore and mythology, as well as representative of men and women from that era.

“Within the palace complex is the Saraswati Mahal Library that contains over 50,000 palm leaf and paper manuscripts — primarily in Tamil and Sanskrit. But you’ll also find a few in Persian, Urdu and other Indian dialects like Telugu. This is in fact the oldest library in Asia dating back to the 16th century,” said Raja.

As far as crafts go, the Thanjavur Bommai (Tanjore doll), a bobble-headed dancing doll made from papier-mache or terracotta is a coveted collector’s item. Craftsmen use gravity to create continuous gentle movements around the neck and waist regions of the doll.

Thanjavur is also known for the veena— an ancient stringed musical instrument. The town’s streets are lined with shops selling this intricate musical apparatus made from the wood of a jackfruit tree.

While it has a rich heritage of craft, what Thanjavur is most famous for are Tanjore paintings. These vibrant works of art depicting Indian religious or mythological figures were originally made with precious metals, pure rubies and emeralds. These days, affordable materials are used instead, to make it more accessible.

“Tanjore art was nurtured by King Serfoji II, and has since then been thriving. Traditionally, pure gold foil is supposed to be used in the creation of these paintings,” said Tanjore artist Sambhaji Bhonsle, a descendent of King Serfoji II himself.

Bhonsle has been a custodian of this art tradition for over 30 years now, and one of the few artists who uses age-old techniques like the use of non-chemical colors and 22k gold foil.

Tanjore art starts off as a sketch created on a fine muslin cloth, which is then pasted on a wooden board — typically jackfruit. Once this is done, brightly colored paints, colored stones and gold and silver foils are used to embellish the painting.

While the arts have always drawn visitors to Thanjavur, it is also a favorite haunt of the epicure.

Food is an integral part of Thanjavur’s heritage, with elaborate fare being served up on large banana leaves that are said to have health benefits while being eco-friendly.

“Tanjore is essentially a vegetarian district,” said K Sridhar, a culinary expert. “When the Marathas came to southern India in 1676 to rule the region, they brought with them a meat-eating culture. Maharaja Serfoji II, who ruled over Tanjore a 100 years later in the late 1700s, is said to have maintained three kinds of kitchens during his time, and each of these cuisines is part of Tanjore’s culinary heritage.”

There was a non-vegetarian Maharashtrian kitchen, a vegetarian kitchen that created dishes using the centuries-old food traditions of the region and a European kitchen, which borrowed from the countries that were colonizing India during the time. Tamarind was used, as well as other local spices like peppercorn and poppy seeds.

“There is an interesting anecdote about the origin of sambhar, a typical southern Indian curried lentil dish that is now a world-famous accompaniment to dosas (rice crêpes). It is in fact not southern Indian at all. When the Marathas from western India came to Tanjore, they were actually trying to prepare dal (lentil soup) and decided to add local spices and vegetables. The concoction turned out to be delicious, albeit different, and since the main cook was called Sambaji, the king named it Sambhar after him,” said Sridhar.

Among the places where one can get an authentic Thanjavur platter are the budget Sangam Hotel; Svatma, a luxury boutique hotel that serves a seven-course tasting menu; and Tanjore Hi Heritage, which focuses on organic, locallynsourced ingredients.