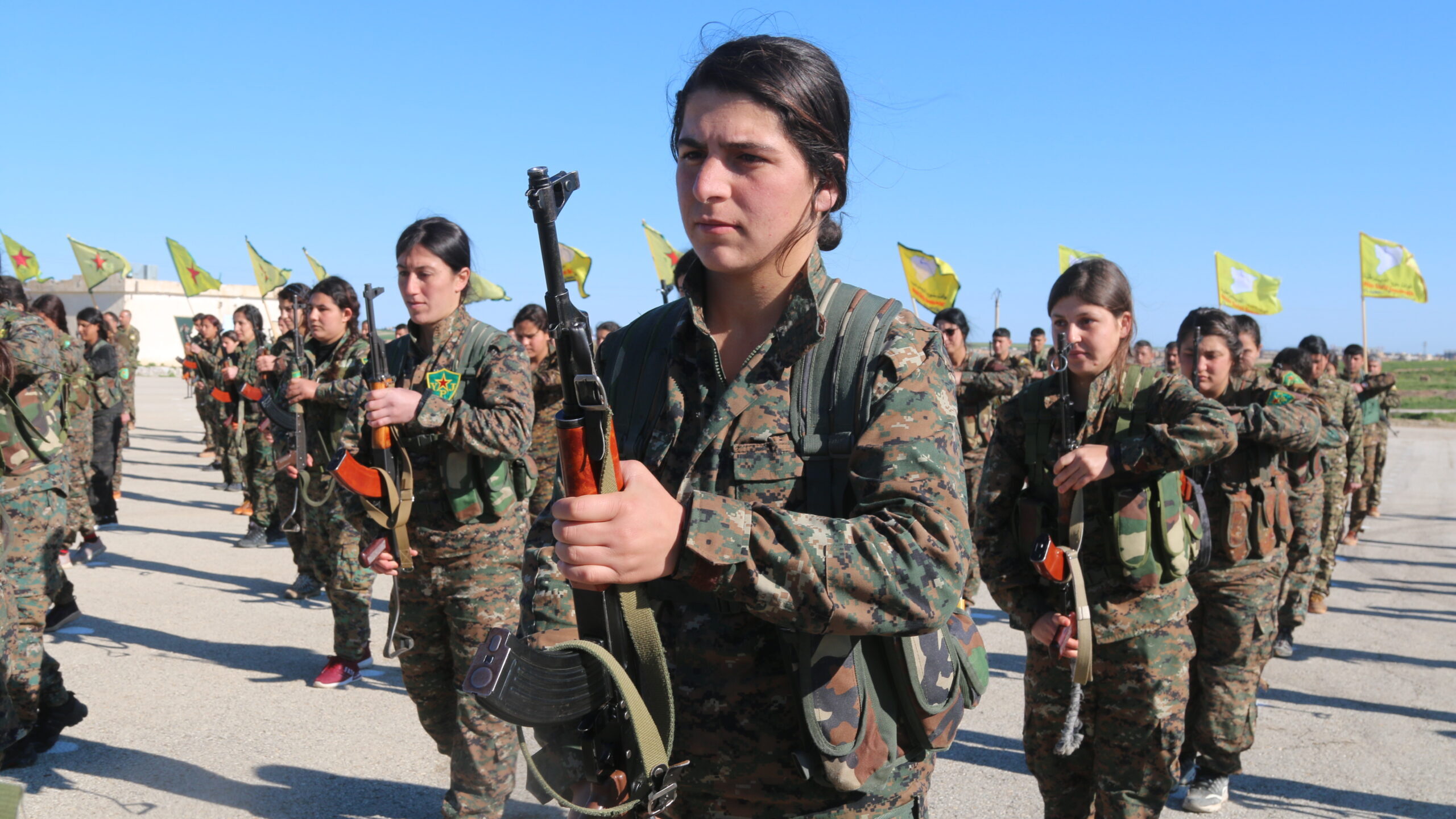 All-female militia fighting against the Islamic State stand in formation. (Photo courtesy of The Daughters of Kobani)

For more than six months, a remarkable group of women’s protection units fought to maintain a Kurdish-majority city in Syria in 2014 during a siege by the Islamic State group.

Though the experienced ISIS fighters had advanced weapons, money and resources, it would be the Kurdish units, not the extremist militants, who won the battle for the town of Rojava.

In her new book “The Daughters of Kobani: A Story of Rebellion, Courage, and Justice,” Gayle Tzemach Lemmon, an adjunct senior fellow at the Council on Foreign Relations, contends it was the tenacity and ingenuity of the women involved in this battle (as well as U.S. airpower) that played a key role in turning the tide.

The book examines the Syrian conflict through the lens of the women’s protection units, known as YPJ.  At one point, it included some 40,000 women who fought bravely against ISIS in Syria and elsewhere. A few women also rose to become combat commanders responsible for forces that included command over men.

The book takes readers into the dusty streets of one of the most brutal conflicts of our time. We are there, shot for shot, as the women battle both ISIS fighters and cultural norms.

Before the war, Syria was a conservative society in which a woman’s role was largely limited to the domestic front. In one example, the author profiles a young girl chastised for playing soccer, deemed to be a boy’s sport. To try and frighten her, the relative dresses up as a ghost.

Yet, as ISIS ravaged Syria and Iraq in 2014, enslaving thousands of women and killing thousands more people in its quest for ideological purity, more women joined the YPJ units — often with the blessing of their families.

The book focuses on four characters whose stories are told in the third person, liberally sprinkled with quotes culled from the author’s hours of interviews.

These are women who were denied opportunities, from schooling to playing soccer, due to societal and family restrictions.  Other characters in the book are motivated by the various atrocities committed by ISIS. Slavery and rape were common practices in areas they captured or controlled. These sections help humanize the war in Syria, which is a complex conflict of shifting alliances. They include efforts to defeat ISIS, violence from the Syrian government and actions by Turkish forces against Syrian Kurds.

Lemmon has a keen understanding of the stakes. Her prior books addressed her war reporting in Afghanistan and profiling women in the special forces units in the U.S. military. She made numerous trips to both Iraq and Syria in preparation for writing her latest book.

One of the strengths of the “Kobani” book is the author’s ability to present, without academic jargon, the evolution of radical feminist ideology and the regional politics that birthed the YPJ.

The Obama administration was keen to limit direct U.S. involvement in the Syrian civil war, preferring to send a handful of advisers and air support, according to Lemmon’s book. In one of the intriguing passages, a young fighter from the YPJ tells a U.S. special forces soldier she has killed more Da’esh (Islamic State) fighters than he has.

The sections that detail the political decisions of the Obama administration or discussions by U.S. Special Forces operatives who advised the Kurdish forces are interesting, though one senses most of the U.S.’ efforts remain classified.

“It was very clear to me in researching this book that the ‘ghost of Iraq’ hung over every decision that was made about Syria,” Lemmon told Zenger News.

One of the over-arching trends in modern warfare has been an increased role for women in combat units and even in terrorist operations. In the United States, the Symbionese Liberation Army became infamous in 1974 for kidnapping 19-year-old heiress Patty Hearst. Groups with the same Marxist roots as the Kurdish Workers Party (PKK) in Turkey have put women into combat, including the now defunct Tamil Tigers. Women have also fought as Maoist rebels in Nepal and Peru.

Conventional armies are also increasingly putting women in combat roles. Lemmon’s “Ashley’s War: The Untold Story of a Team of Women Soldiers on the Special Ops Battlefield,” published in 2015, is about CST-2, a unit of women handpicked by the U.S. Army who proved invaluable on Special Forces’ missions.

“The Daughters of Kobani” offers ample detail about key battles of the Syrian civil war and the status of women. A fast and compelling read, it is hard to put down. “Kobani” has also been optioned for a series adaptation by Hidden Lights, the production company founded by Hillary Clinton and Chelsea Clinton, who already have a series order for “Gutsy Women” at Apple TV.

Lemmon’s book “Ashley’s War” is also being turned into a movie, produced by Reese Witherspoon for Universal.