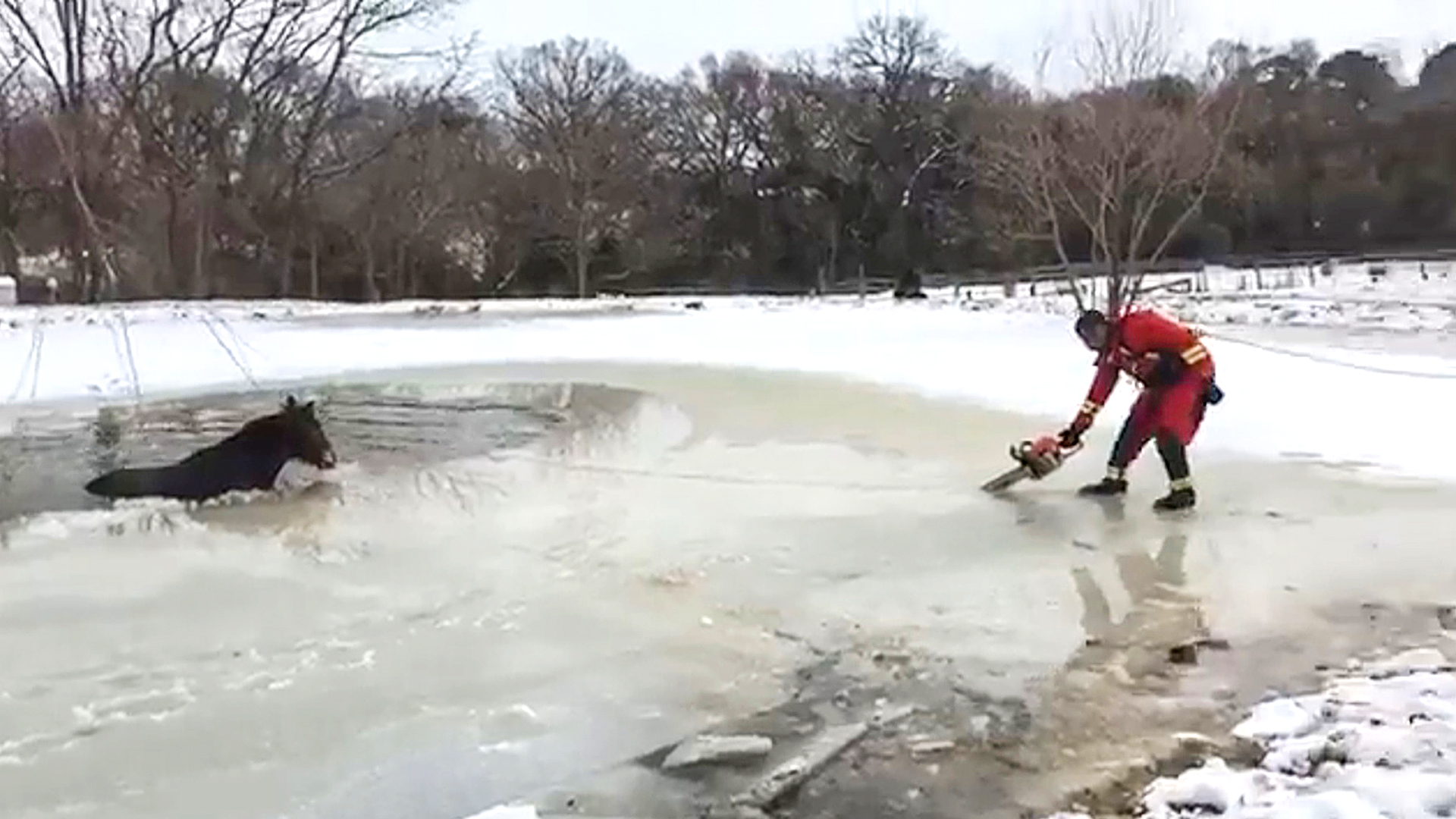 The Denton County emergency services district officer using a chainsaw to access and remove the horse safely from the pond, in Denton County, Texas. (@ArgyleFireDistrict/Newsflash)

TEXAS, USA – A Texas firefighter cut the ice on a frozen pond with a chainsaw to free a trapped horse in Denton County, Texas.

The incident took place on a farm at around midday on Feb. 18.

In the footage, the firefighter is seen braving the cold to cut the ice on the frozen pond with a chainsaw before slowly easing the animal out of the water and into the care of its waiting owners holding towels.

The police added that the owners warmed the horse and that it looked in good health.

“The Firefighter was cold, but doing okay after getting out of the weather and warming up,” said the Denton County authorities.

Every year, PETA receives reports about dogs, cats, and other animals who die after being left outdoors in cold weather. In 2019 alone, there were 37 animal companion deaths related to cold weather — and those are just the ones that were reported.

In 2021 till now, 13 animals have died due to cold weather, and 122 were rescued. During 2019-2020, 38 deaths occurred due to harsh weather conditions, and around 358 were rescued.“Animal cruelty encompasses a range of behaviors harmful to animals, from neglect to malicious killing,” as per a statement by The Humane Society of The United States.

“Most cruelty investigated by humane officers is unintentional neglect that can be resolved through education. Intentional cruelty can run the gamut from knowingly depriving an animal of food, water, shelter, socialization or veterinary care to maliciously torturing, maiming, mutilating or killing an animal.”

As per the American Society for the Prevention of Cruelty to Animals, animal hoarding occurs when an individual is housing more animals than he or she can adequately care for.

It is a complex issue that encompasses mental health, animal welfare, and public safety concerns. Animal hoarding is defined by an inability to provide even minimal standards of nutrition, sanitation, shelter, and veterinary care — often resulting in animal starvation, illness, and death.

“Every year in the United States, a quarter of a million animals fall victim to hoarding,” it said in a statement. “Animals collected range from cats and dogs to reptiles, rodents, birds, exotics and even farm animals. Animal hoarding is covered implicitly under every state’s animal cruelty statute, which typically requires caretakers to provide sufficient food, water and veterinary care. However, only two states, Illinois and Hawaii, currently have statutory language specifically addressing animal hoarding.”