Halemaʻumaʻu with lava erupting from a vent on the northwest side of the crater in Hawaii. (USGSVolcanoes/Newsflash)

Footage of the eruption was recorded at the active shield volcano of Kilauea located in the resort islands of Hawaii.

Historically, Kilauea is the most active of the five volcanoes that together form the Big Island of Hawaii. Located along the south-eastern shore of the island, the volcano is between 210,000 and 280,000 years old and emerged above sea level about 100,000 years ago.

The eruption at the large volcano started in Dec 2020 but has been largely restricted to a crater in the volcano called Halema‘uma‘u.

Halemaʻumaʻu is home to Pele, goddess of fire and volcanoes, as per the traditions of the Hawaiian religion. Halemaʻumaʻu means “house of the fern”.

The video shows a stream of molten hot lava gushing out of a vent into the crater where a massive lake of lava can be seen forming.

“Observations indicated lava effusion continues at the western fissures, but is weaker and slower,” said a statement from US Geological Survey.

“The lava rapidly develops a thin crust while flowing outwards towards the east with occasional crustal foundering between the vent and main island, but not beyond the island. A thin surface crust has started forming around 3 small pieces of the spatter cone that have been in the lake and are very close to the ven.”

The lava flow is an outpouring of lava created during an effusive eruption. Explosive eruptions produce a mixture of volcanic ash and other fragments called tephra, rather than lava flows. 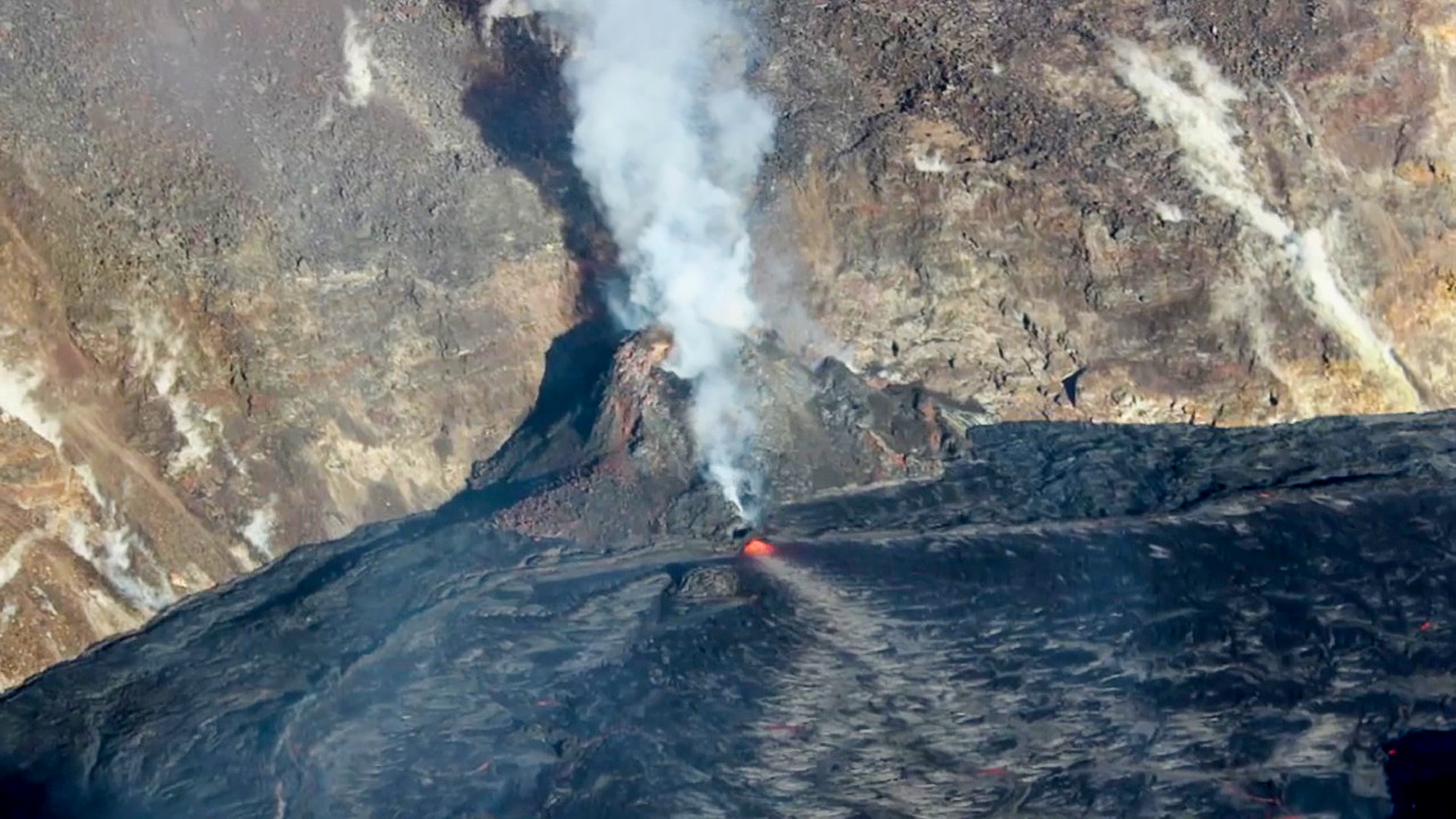 Lava erupting from a vent on the northwest side of the crater in Hawaii Volcanoes National Park. (USGSVolcanoes/Newsflash)

The lake was measured to be about 215 meters (705 feet) deep with intermittent crustal foundering while the eastern part turned into a stagnant and solidified surface crust.

Extensive amounts of volcanic gas are continuously released which are composed primarily of water vapors, carbon dioxide, and sulfur dioxide which has led experts to fear the health hazards they pose to locals.

The sulfur in the toxic gasses can react with other components in the atmosphere leading to volcanic smog which increases the risk of airborne health hazards or potentially damages agriculture.

Explosions, rockfall and volcanic glass particles were also reported in the latest eruptions.