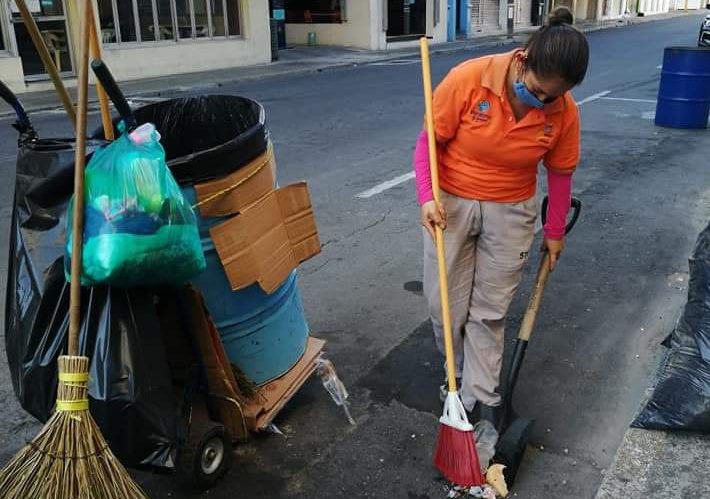 Delfina Martínez works cleaning and sweeping the streets of the city of Veracruz, in Mexico. (Christian Valera Rebolledo / Café Words)

They do vital work, though most people never notice them.

The Mexican nation owes much to street sweepers, charged with removing the garbage in the streets. Unremoved waste can lead to clogged pipes and flooding during the rainy season. Cleaning reduces ambient pollution.

In Mexico City alone, 2,700 street sweepers travel more than a kilometer every day, a Herculean effort of collecting pounds of garbage from the trash cans. However, people tend to ignore them and their task, considering it a benefit of living in the city.

“Let me be honest, no one sees us,” said Delfina Martinez, a sweeper attached to the Public Cleansing service in Veracruz, Mexico. “It is an invisible and thankless job. When we do our job correctly, and the streets are clean and proper, no one says anything. But what happens when a street or an alley is not swept? Then, everyone notices it.”

Martinez says if not for her and her companions, the city would suffer a significant health problem.

“For example, during Carnival season, despite a large amount of waste in the streets that accumulates every day, come morning, it has already been swept,” she said.

Sweepers, divided into three shifts — morning, afternoon and night — individually collect up to two 52-gallon waste drums. Although they are often stigmatized, as the smell of collected waste permeates their clothes, they do critical work many shun. And they ensure a clean and orderly country.

Based in Mexico’s capital, the Public Cleaning service has more than 15,000 workers, including garbage trucks, volunteers and street sweepers. With the modern pandemic, ambient pollution has lowered, yet the households’ daily consumption ends up on the streets.

A single sweeper by collecting and disposing of garbage helps more than 1,000 people. Their silent work is not easy; they cope with more than 10,000 tons of daily waste generated throughout the country.

Also, sweepers have to separate the regular waste from the recyclable, avoiding getting hurt or cut with sharp refuse, which could mean an infection or poisoning.

“Here, you have to sweep everything away. Right now, we collect a lot of face masks of all kinds, yet usually, we collect the garbage people throw from out of their cars, like yogurt cups, water bottles, soda cans or potato chips bags,” said Martinez. “I have also found stuff like medicine boxes, condoms, syringes, glass. I have to take care with stuff like that, and have all possible vaccines to avoid contracting illness such as tetanus.”

When a household does not separate its waste, it puts the health of street sweepers at risk, as it exposes them to harmful or sharp materials.

During the COVID-19 pandemic, they are even more at risk. They can unexpectedly touch an item that has been in contact with someone infected since, depending on the object, the virus can remain on surfaces from a few hours to days.

How to make their jobs easier?

The best way to support them is to have separate garbage cans, taking into account that, since 2017, garbage is divided into three categories. These categories are identified by color: green, organic waste; gray, recyclable inorganic; orange, nonrecyclable and sanitary.

“What someone who wants to help us can do — and it especially helps our colleagues who are collectors — is to wrap everything that is broken glass in cardboard or newspaper. Put the syringe needles into plastic bottles, and, especially now, tie up everything that comes from a coronavirus patient.”

The orange trash bags are designed to prevent the spread of possible sources of infection. All waste that came in contact with the nose or mouth must be put in a separate bag (for example, articles such as face masks, napkins, toothbrushes, chewing gum, among others.) That way, public workers will know what material they handle and will use adequate precautions.