Manya Singh washed dishes for a living, and worked at a call center to chase her dreams for a better future.
By Radhika Bhirani February 26, 2021
Facebook
Twitter
Linkedin
Email

NEW DELHI — Manya Singh ran away from home at 14. She took a train from Gorakhpur in the eastern Indian state of Uttar Pradesh to Mumbai in Maharashtra — around 1,000 miles away — without a ticket, all by herself.

She wanted to, as the India-set Hollywood film “The White Tiger” says, “break out of the coop.”

The 20-year-old daughter of an auto-rickshaw (three-wheeled vehicle) driver from Uttar Pradesh is today, a runner-up at the VLCC Femina Miss India 2020 beauty pageant.

“Growing up, everything was hard for our family,” Singh told Zenger News. “In our homes, people say families are ably supported only if the first-born is a boy, but I never wanted my family to feel that. So, I was responsible and mature from a very young age.”

She had told her parents many times that if she ever left home, she would go straight to Mumbai — the city of dreams. 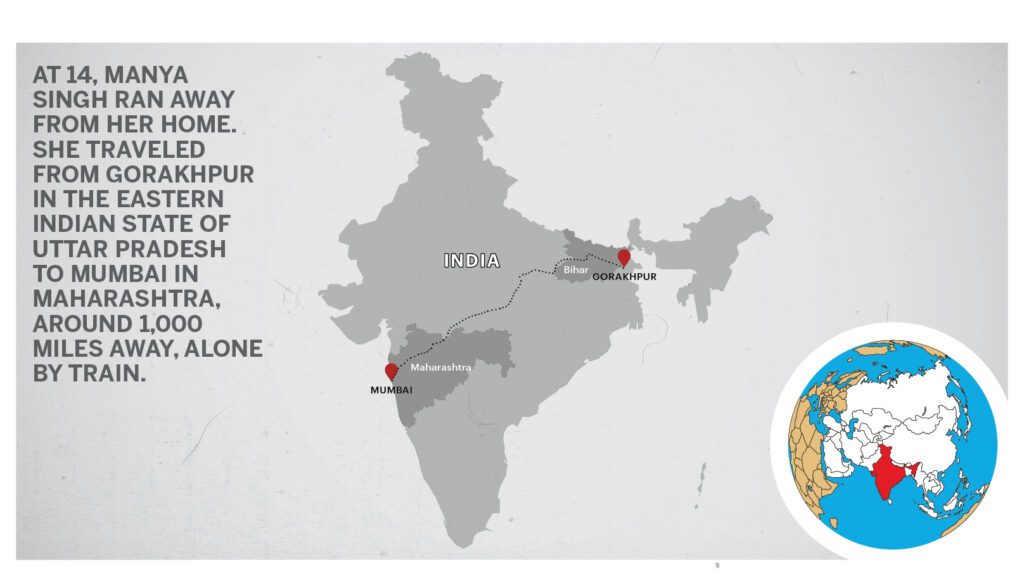 “When I reached and informed them, they were already on a train to Mumbai. A week later, I took up a part-time job at a Pizza Hut outlet,” said Singh, who also worked at a call center at night to earn some money, while still carrying on with life as a student.

The story of her life was first detailed in an Instagram post shared by the official Femina Miss India handle in December 2020. But it started garnering national attention only when she got crowned earlier in February.

Her decision to compete at a beauty pageant was driven by a desire to uplift her family and “to show the world that all is possible if you are committed to yourself and your dreams (sic).”

“Before Miss India, I participated in a lot of pageants. But I was mocked, rejected, and disregarded,” Singh said.

Coming from Kushinagar, a pilgrimage town in Uttar Pradesh, a state that has been battling female feticide, Singh admits life was not always easy for an “opinionated woman.”

“In my hometown, women are told not to speak their mind. But I developed an opinion and raised my voice,” she said.

She was lucky her parents supported her.

Omprakash Singh, who has been an auto-rickshaw driver since 1993, and Manorama Singh, who recently took up a job as a hairstylist, are emotional about how their daughter made an impossible dream possible.

“Our daughter has proven that a girl from a lower economic background can dream of being Miss India, and become one… Manya used to carry a pair of heels in her college bag, and I used to reprimand her for doing that. But she assured me that she would pursue studies and also fulfill her modeling dreams,” Singh’s father said after the pageant.

Singh was 16 when the idea of competing for the Miss India contest took seed.

While living up to her promise to her parents of finishing her studies, she kept nurturing her dream by trying her luck at various pageants. She would even take on modeling assignments for as little as INR 500 (about $6).

They signed her up with the agency and started training her to improve her walk and speech.

“Manya has authenticity and caliber. She had a spark and the potential to be where she wanted to be,” Anjali told Zenger News.

When Singh was crowned on stage, her eyes welled up. She had made it to the top three out of a total of 31 finalists from across the country.

Singh’s parents were thrilled. The pride of the family was visible as Singh rode an auto-rickshaw to her alma mater, from where she graduated in banking and insurance.

Her father sat in the driver’s seat, leading an 18-vehicle auto-rickshaw rally for a half-mile stretch, while her mother held on to Singh’s hand while sitting in the backseat.

“Even if one parent tells his or her daughter that, ‘If that rickshaw-wallah’s daughter can do it, so can you’, I will feel that I have achieved my dream,” said Singh, who now hopes to buy a house for her family.

The pageant was held virtually this year for the first time. The 31 shortlisted finalists had to go through virtual training and grooming sessions, after which 15 made it to the next rounds at a grand finale held in Mumbai on February 10.

Designers Falguni and Shane Peacock of the label Falguni Shane Peacock, who have designed for the likes of Britney Spears and Katy Perry in the past, were among the judges at the contest.

“Her struggle of living on the streets, working at a young age to support her family, joining a call center so that she could learn English without having to shell out a hefty sum at a finishing school is commendable,” the designers said to Zenger News. “The 2020 edition of Miss India proved that background doesn’t matter.”

Manushi Chhillar who broke a 16-year-old jinx for India by winning the Miss World 2017 crown — the first since Priyanka Chopra had won in 2000 — said she is glad that the reach of beauty pageants has increased over the years.

“Now there are girls from all over the country, from different backgrounds that are competing in Miss India. Girls who haven’t had the easiest journey, actually end up doing great things. I hope more youngsters chase their dreams and believe in themselves,” Chhillar told Zenger News.

In 2008, Indian filmmaker Madhur Bhandarkar had made a film called “Fashion”, starring Priyanka Chopra, about a small-town girl turned supermodel, who goes through trials and travails as she tries to make it in the fashion industry.

Speaking to Zenger, he reminisced how during research for “Fashion”, he came across many girls from small towns who were struggling to make a mark. Most failed.

“Sometimes, one wrong move can make everything go haywire. It is important to surround yourself with the right people, get the right guidance, and focus on your work,” said Bhandarkar.

The journey for Singh, he said, has just begun.

“She has to work harder now because the scrutiny will be harsher.”