IKEA plans to reach 100 million people in India over the next few years. (Naomi Baker/Getty Images)

Until recently, Kishore Biyani of Future Group was to India what Sam Walton of Walmart was to the U.S. Biyani, who started a retail revolution in India with his Big Bazaar stores under the Future Group, is now fighting to stay afloat by selling stakes in his group.

His empire was hit by the boom in online retail and store closures amid pandemic-induced lockdowns. A deal to pare debt with India’s largest conglomerate, Reliance Industries, made US tech giant Amazon take his firm to court. Amazon claims the transaction violates a noncompete clause it had with Biyani’s group.

Biyani can’t re-enter the retail segment for 15 years as part of the Reliance Industries deal but can operate the home retailing business under the HomeTown brand — where he is facing another international rival IKEA.

IKEA, one of the world’s largest home furnishings firms, will serve as the anchor store of an Indian shopping mall spread across 47,833 square meters in Noida, less than an hour’s drive from India’s capital Delhi. 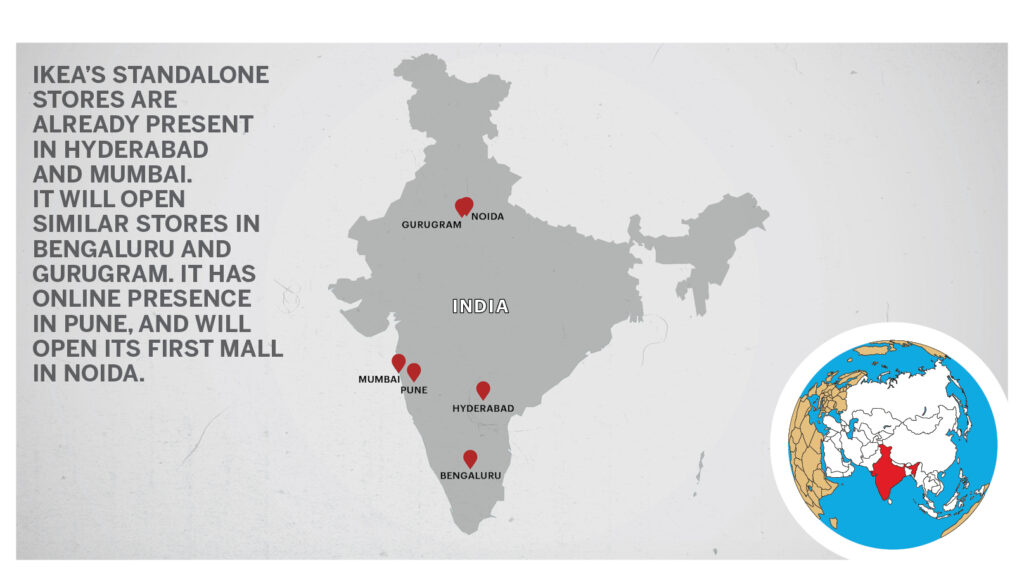 The Swedish firm already has two standalone stores in the southern city of Hyderabad and India’s financial capital Mumbai, and plans to open two more in Mumbai during 2021, the firm told Zenger News.

“India is an exciting and dynamic market, and this [Noida land] acquisition is a key milestone in our strategic vision to transform the business in response to the changing retail environment,” said Cindy Andersen, managing director, Ingka Centres — part of the Ingka Group that includes IKEA Retail and Ingka Investments.

The Noida mall with an IKEA store as an anchor will be set up by Ingka Centres at an investment of nearly INR 5,500 crore ($759 million). And, Andersen wants IKEA to “build emotional connections” with the “millions of people [that] live within easy reach of Noida.”

“India’s capital region is one of our most important markets in India,” Peter Betzel, chief executive of the furniture retailer’s Indian arm, said. “This next step in our expansion is in line with IKEA’s ambition to meet 100 million people in India in the coming years.”

The Swedish furniture retailer is optimistic about India’s furniture and furnishings market despite the downturn that has hit the country and people limiting their spending due to the pandemic.

India’s furniture and homeware market’s revenue is expected to show a compounded annual growth rate (CAGR 2021-2025) of 8.66 percent, resulting in a projected market volume of $2,131 million by 2025, according to a Statista report.

“Even before the pandemic, the Indian retail sector was in troubled waters owing to lower-than-expected consumption (around late 2019),” Anuj Puri, chairman of ANAROCK Property Consultants, told Zenger News.

“Covid-19 exacerbated the situation. But the slowdown in many of the retail segments is a short-term phenomenon. Organized retail in India still has a long way to go,” he said. “Brands like IKEA are optimistic about the growth prospects of Indian retail, they maintain that the size of the population, consumption, and demand is likely to drive organized retail.”

In India, IKEA’s first standalone store of 400,000 square feet opened in Hyderabad in August 2018 to massive crowds and traffic snarls.

Part from this learning and part due to the Covid-19 restrictions, the second standalone Indian store of over 500,000 square feet opened in Mumbai to pre-registered visitors after a delay in December 2020.

The third such store is to come up in a 500,000 square feet space in Bengaluru. It also plans to open a 1,000 square feet store in Gurugram, also near Delhi. Both these are yet to open. At the time of announcing the Gurugram store, IKEA said it would open five to six stores in the capital region.

“Indian cities saw the addition of just five new malls in 2020. While our pre-Covid study indicated that 2020 will see 54 new malls, most of this supply has spilled over to 2021. As many as 44 new malls might get operational by 2021-end across Indian cities,” Puri said.

When IKEA entered India, it surveyed almost a thousand Indian homes to see what they wanted and tweaked some of their products. Indians were not used to assembling furniture on their own — a trademark of IKEA. To fix that, they tied up with an Indian firm that offers assembly services.

The furniture market in India is highly fragmented “with 86 percent share of sales coming from unorganized channels”, according to consulting firm RedSeer.

“This is set to change with strong growth in online channels. Organized share can potentially reach 20 percent by 2022,” Redseer said, adding that the share of furniture retail purchase in overall online retail was just 3 percent in 2017.

It is not just IKEA, Biyani has to face. He is also facing UrbanLadder — a start-up that changed the face of the Indian furniture market with its fresh designs in 2012. A majority stake in UrbanLadder was acquired by Reliance Industries’ retail unit in November 2020.

Future Group that controls HomeTown stores in India did not comment on the story due to the ongoing case between Reliance Industries and Amazon.

“I chose this option [of entering a deal with Reliance Industries] despite the fact that this means there is no gain for the promoters. In fact, we are losing business that was painstakingly created with you all over the last three decades,” Biyani said in a memo to his employees in January.

UrbanLadder and a similar platform Pepperfry started as online stores but turned into an omnichannel presence later.

Biyani’s HomeTown, which started in 2006 as an offline store, went online later. At present, Praxis Retail (under Future Group) manages approximately 48 HomeTown stores. Biyani also bought another furniture brand FabFurnish in 2016 and merged it with HomeTown a year later.

IKEA has a mix of online and brick-and-mortar stores in India.

“We want to be present across all customer touchpoints through a combination of big IKEA stores, smaller city-center stores, and an online platform. We will establish a strong omnichannel presence in Bengaluru, and India’s capital region and are also exploring other opportunities. We are already online in Mumbai, Pune, and Hyderabad,” IKEA India said.

India had allowed IKEA to open 25 stores in India in May 2013. Its promise of $1.95-billion investment at the time was the biggest by a foreign firm since the country changed norms in 2011 to allow 100 percent foreign ownership in single-brand retail.

“We entered the U.S. in September 2020, when we acquired the 6X6 mall in downtown San Francisco,” Jan Kristensson, global expansion and development manager, Ingka Centres, told Zenger News. “We are transforming the mall into a new IKEA-anchored retail-led destination and actively targeting sites for other urban projects in New York City, Los Angeles, and Chicago.”

“We are more likely to introduce larger projects in emerging markets like India where the market for retail and leisure offerings is still developing. Physical retail will never disappear, but as we develop assets in places like Noida, India, and redevelop assets like 6X6 in San Francisco, we will ensure they go far beyond shopping with a mix of uses that ensure people have multiple reasons to visit.”