Protected since British rule, India has finally liberalized its geospatial sector, allowing Indian firms to collect, store, and share such data for services like mapping, transport, and e-commerce, among others, without prior government approval.

Till now, the government and the Survey of India — the country’s surveying authority — had the sole right to access and use geospatial data.

The guidelines, released on Feb. 15, seek to create a level-playing field for private domestic firms and reduce dependence on foreign firms like Google, and TomTom, among others, that provide location and mapping services.

India is expecting the deregulation will lead to a $14-billion geospatial economy by 2029. In 2018, it was pegged at $3 billion.

“Our government has taken a decision that will provide a huge impetus to Digital India,” Indian Prime Minister Narendra Modi said in a tweet. 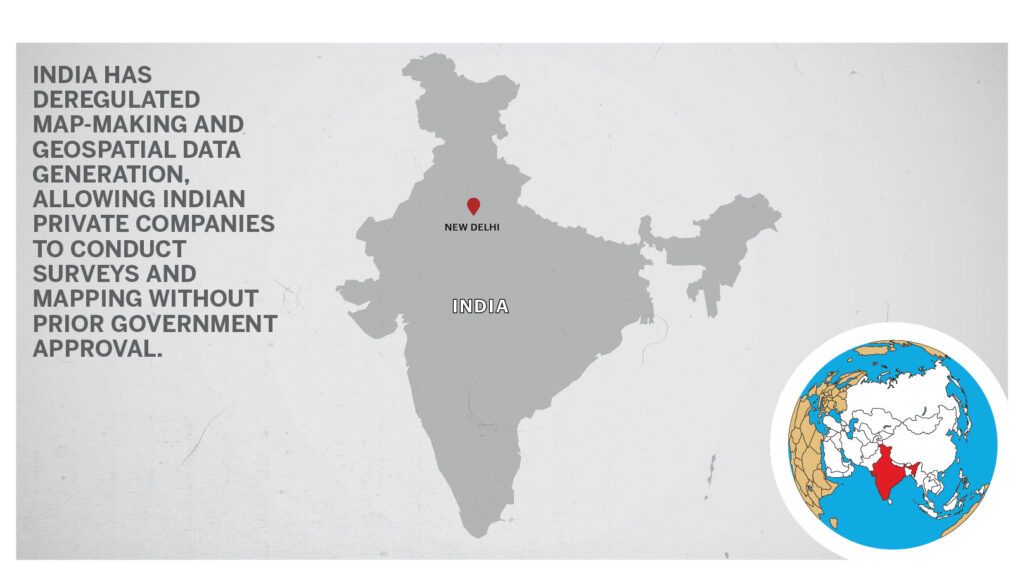 “Liberalizing policies governing the acquisition and production of geospatial data is a massive step in our vision for an Aatmanirbhar Bharat (self-reliant India).”

A 2016 draft Bill had warned of penalties

The latest guidelines that state that the availability of “comprehensive, highly accurate, granular and constantly updated representation of geospatial data will significantly benefit diverse sectors of the economy, boost innovation, and greatly enhance the preparedness of the country for emergency response” is in contrast to a draft Bill prepared by India’s Ministry of Home Affairs five years ago.

The 2016 draft Geospatial Information Regulation Bill said: “No person shall acquire geospatial imagery or data including value addition of any part of India either through any space or aerial platforms.” This was true for those possessing or distributing such data, too.

Anyone who already had access to such data was to contact the government’s Security Vetting Authority to retain the data and for a license, according to the draft Bill.

The draft Bill, which even laid out penalties of as much as INR 100 crore ($15 million) and/or a jail term of up to seven years for those acquiring or disseminating this data “illegally”, never saw the light of the day.

It is not yet clear as to what led to the policy change, but while announcing the deregulation, Harsh Vardhan, minister for science and technology and earth sciences, said “what is readily available globally does not need to be regulated.”

What about foreign firms and Google?

The norms allow foreign companies and foreign-owned or -controlled Indian companies to license digital maps or geospatial data. But data of value finer than the threshold accuracy can only be used for their customers in India.

The threshold accuracy has been set to one meter (horizontal) and three meters (vertical) for onsite spatial data, and 10 meters for up to 500 meters from the shoreline and 100 meters beyond that for bathymetry data.

The norms also prohibit the reuse or resale of such information by licensee companies. Access to data of value finer than the threshold accuracy can only be made available through Application Programming Interfaces that do not allow the information to pass through the licensee companies or their servers.

Application Programming Interfaces is a software intermediary that allows two applications to communicate with each other.

The norms are not clear about Google Street View, which sought approval in 2015 to add Indian locations to its service that allows one to explore places using 360-degree panoramic and street-level imagery.

Though the firm got permission to add a few tourist spots, its proposal to add the whole of India to its services was rejected in 2018.

“Companies such as Google, TomTom can still use and disseminate the maps they hold,” Lalitesh Katragadda, former country head of Google’s India Products Division and founder of Indihood, a hyper-local, crowdsourcing tech platform, told Zenger News.

“But, as per this policy, only Indian entities can create and disseminate [services like that of] Street View as well as next-generation maps with higher resolutions,” said Katragadda. “The changed norms will create an ecosystem for Indian mapping technology companies and support data sovereignty.”

Where does India stand?

“India presently relies heavily on foreign resources for mapping technologies and services,” said Harsh Vardhan, who is also the minister for health and family welfare.

The liberalization will “spur domestic innovation and enable Indian companies to compete in the global mapping ecosystem,” he said.

India entered the sector only in the 2000s.

A 2018 report by the National Association of Software and Service Companies said India “relies heavily on imports for its geospatial hardware requirements” and said the Indian geospatial industry had a trade surplus of INR 5,385 crore ($809.44 million) in 2017-18.

“Though it’s [geospatial data] not in an advanced stage of implementation in most sectors, the applications of geospatial technology has found new avenues in recent times,” another 2018 report on ‘India’s Geospatial Market and Prospects’ states.

“Satellite imagery and geographic information system are two of the most used technologies in the agriculture sector. Increased demand for onboard sensors for mapping and monitoring is visible.”

Who will reap the benefits?

“MapMyIndia always kept in mind of not publishing security-sensitive data and the government was kept in the loop on what we were publishing,” Rakesh Verma, chairman and managing director of MapMyIndia, told Zenger News.

“The only problem was to get approvals for which we had to plea in front of the government officials. With the new guidelines, acquisition of data will become easier and faster.”

“We collect and generate maps from the surface level, while the Indian Space Research Organisation generates satellite imagery aerially. The idea is to combine these to create comprehensive mapping abilities,” Verma said.

“More start-ups are likely to come up in the second layer in which these companies will collect data and provide customized services. Chances of such companies going global in scale are high given the vastness of India as a country,” he said.

The liberalization will also help drone firms. India is in the process of finalizing a drone policy.

The new guidelines come with caveats. One of them is the prohibition of physical access to aerial/territorial water routes leading to any establishment, installation, or premises to which access is restricted by a government department.

India’s Department of Science and Technology will also come up with a “negative list” of areas where the acquisition and use of geospatial data will be regulated.

In its guidelines, the government said the negative list will be “specific to very sensitive attributes and care would be taken to minimize restrictions to boost ease of doing business.”

“We must not stick to the older ideas of not sharing information. We are walking into future warfare and must prepare ourselves for it rather than stalling such moves,” Lieutenant General (Retired) Gurmit Singh told Zenger News.

“What is available on the digital platforms is available to the whole world. What matters is how you interpret it and use it for your security,” said Singh, who was a former deputy chief of Army Staff dealing with information systems and information technology.

(Debasis Mohapatra contributed to the reporting.)