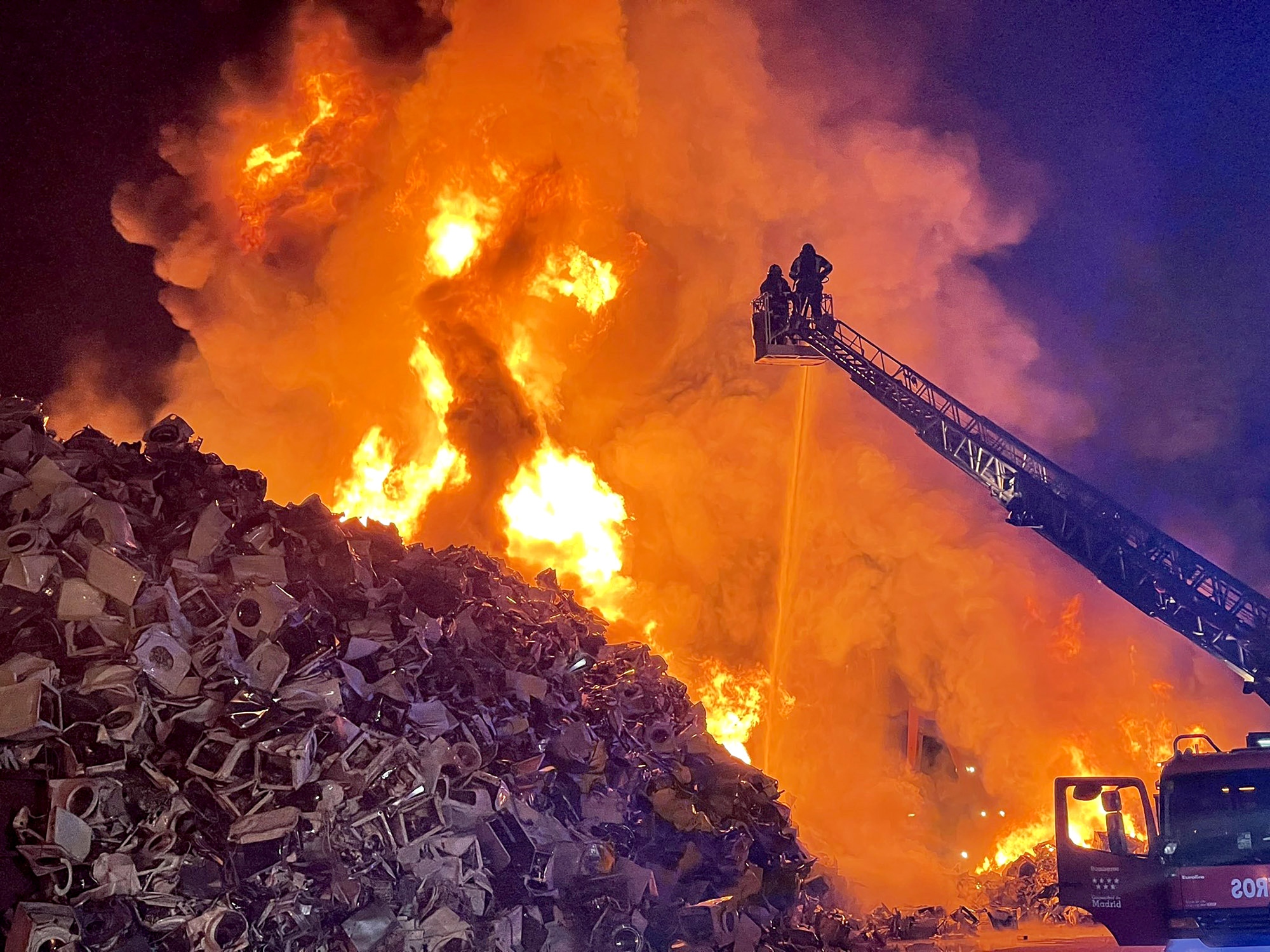 The fire in the municipality of Leganes on Feb 16. (112cmadrid/Newsflash)

MADRID, Spain — A video of firefighters battling a major fire of burning washing machines and electrical devices in a Madrid scrapyard has been released by the city emergency services.

The fire took place in the municipality of Leganes located near the Spanish capital in the autonomous Community of Madrid and started in the early hours of Feb 16.

Madrid Emergency and Security Agency 112 posted videos of the fire breakout on their official twitter handle writing, “Industrial fire in a junkyard in #Leganés . The main focus has been on an outdoor pile of washing machines that are burning with all their components.”

The Emergency and Security Agency further shared images of the fire notifying that the fire department is working on the fire control. “There is no danger of spreading to neighboring industries. There are no injured or intoxicated.”

One video showed the flames covering the yard while a second one shows massive columns of smoke rising in the air as firefighters battle the fire underneath. Another two videos show the blaze from what appears to be drone footage.

Thermal imaging also revealed the full scale of the heat and flames generated during the blaze. Clouds of smoke were reportedly seen from different points of Madrid.

Another video showed the firemen leading the operation named J.A. Bernal, explaining that the dump pile was made up of washing machines, plastics, and other electro domestic items which caused it to reach high temperatures and made it difficult to extinguish.

“We began removing pieces of metal from the top of the pile and were placed them in a secure location after cooling off, assuring the situation was contained,” said Bernal in the video.

The blaze occurred in an area that has around 10,000 square meters (107,639 square feet) of space occupied by washing machines and other electro-domestic products.

There were no injuries reported in the incident. The Madrid Emergency and Security Agency 112 also informed that the air quality of the affected area remained within the normal range on Feb 16 despite the huge fire breakout and clouds of smoke.

The emissions released by industrial waste dump yards and scrapyards in Madrid are the second leading cause of poor air quality after emissions by vehicles.

“The ‘Industry’, ‘Residential/Commercial/Institutional’ (RCI), and ‘Waste treatment’ sectors are the next most important in terms of emissions,” as per the Air quality and climate change plan for the city of Madrid.

“The ‘Industrial’ sector has been decreasing over the years, from nearly 2,000 t in 1999 to 940 t in 2014. Annual emissions of the ‘RCI’ sector have remained constant above the threshold of 2,400 ton/year. Emissions of the ‘Waste treatment’ sector increased significantly in the early years of the inventory before falling again until 2014.”

The local police are still investigating the cause of the fire in which still remains unknown.