VIDEO: US Cops Go Into Frozen Pond To Save Struggling Dog 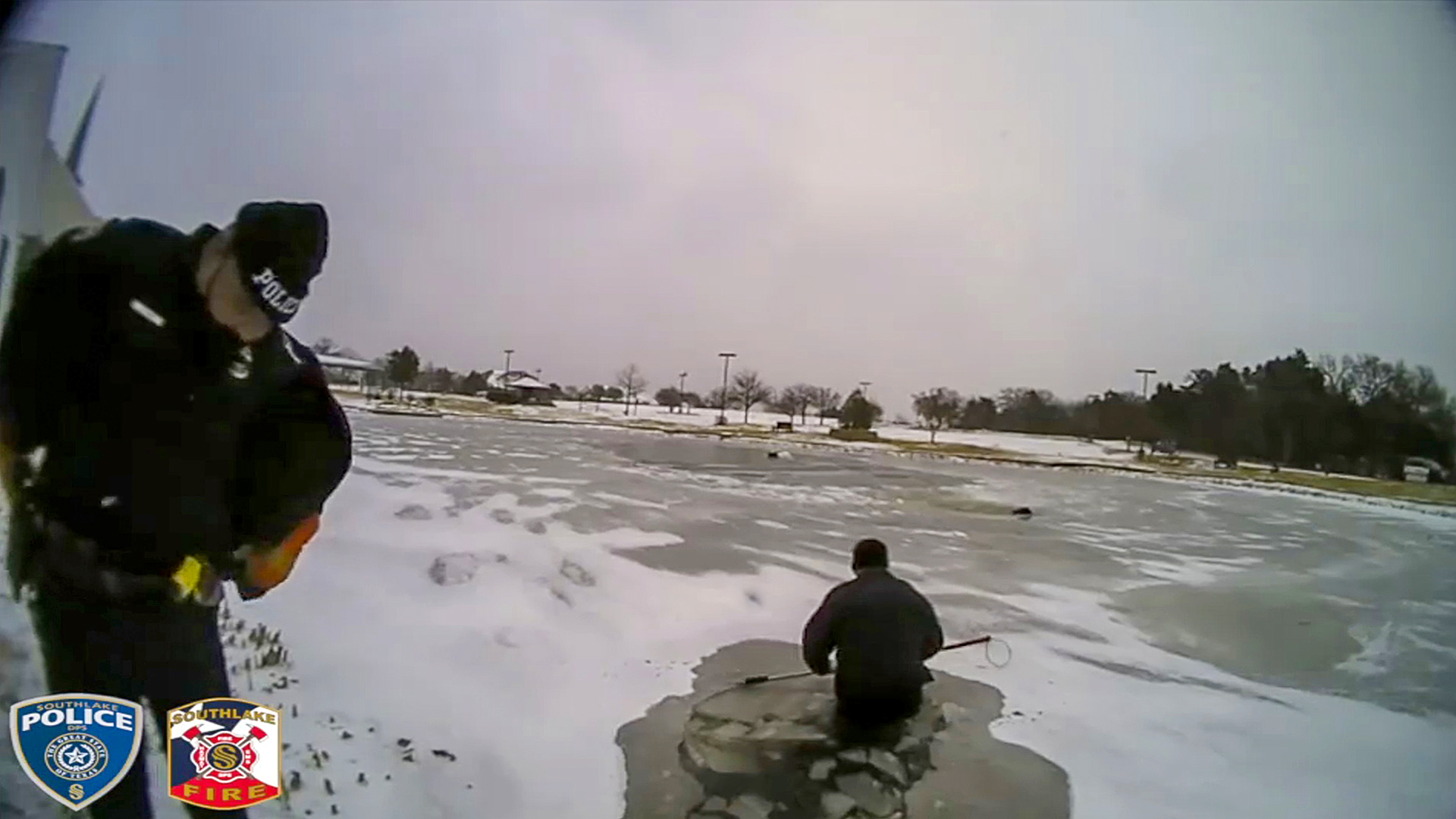 Officers rescue dog who had fallen through a thin layer of ice of a pond at the White Chapel Church in the city of Southlake, Texas. (SouthlakePublicSafety/Newsflash)

TEXAS, USA — The Southlake Police Department attended a 911 emergency call and rescued a dog that had fallen through the thin ice and was struggling to get out.

The incident took place on Valentine’s Day in the city of South Lake in Texas at around 2.40 PM. The officers were immediately dispatched to the scene along with local fire crews.

As the officers were first to arrive at the scene in seven minutes of the call, the dog, a black labrador named Shadow, was struggling more by the minute, they decided to take immediate action and not wait for the firefighters.

“Our original plan was to wait for Southlake Fire to arrive with their ladder to rescue him, but precious moments began slipping by, and the best-laid plans of mice and men often go awry,” wrote the police department in a Facebook post along with a 6-minute-long video of the dog rescue.

The body-cam footage shows one of the officers going into the pond and trying to make his way towards the dog by breaking up the ice with a pole, but he gets stuck halfway.

Another officer then grabs an inflatable and manages to float his way to the dog and get him out of the freezing water before the two are pulled back to the bank.

Shadow’s owner, Scott, said the dog was in good health after the ordeal and is resting at home.

“Please watch your pets over the next few days, as many of them have never seen ponds and pools freeze over. They’re fast and curious! We’ve seen a number of pet rescues on Facebook lately, so please please please keep a vigilant eye on your beloved family members,” the police department wrote in their Facebook post spreading awareness about pet-related accidents during the winters.

“Amazing rescue! My heart was breaking listening to poor Shadow’s cries, but I’m so happy and relieved to see he’s recovering, thanks to your heroes who braved the icy cold!” commented, ‘Kimberly Plaskett’ a Facebook user on the post.

According to a report by PETA, the number of animals dying because of freezing winters is increasing every year. “Every year, PETA receives reports about dogs, cats, and other animals who have died after being left outdoors in cold weather. In 2019 alone, there were 37 animal companion deaths related to cold weather—and those are just the ones that were reported. Most aren’t” states PETA on their website.

In 2021, 13 animal deaths have happened in the US because of freezing winters. 79 animal rescues in total have been reported so far this year.

«Previous Post
Cheers! Free Wine For 101-Year-Old Woman After She Applied For A Job So She Can Buy Her Own Booze»Next Post
Teen ‘Cured’ Of Rabies Lies In Vegetative State For 3 Years