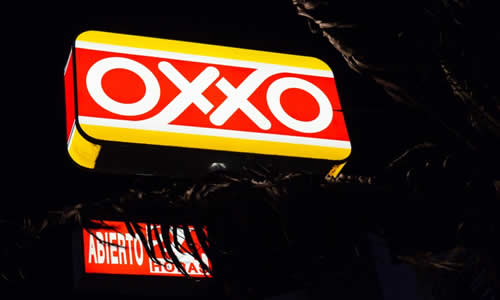 With more than 6,000 stores in over 350 cities, OXXO is one of the country’s top 10 sales chains. In Latin America, they occupy seventh place in ranking by sales numbers.

OXXO currently employs millions of workers, and has expanded to gas stations.

“As a user, I believe that going to OXXO can help you solve various problems,” said María Guadalupe Vidales, who lives in Veracruz. “Besides buying groceries, you can recharge your cell phone, receive money orders and make bank deposits.”

Shoppers secondary choice for groceries is often the local tienditas, small convenience businesses. They cannot compete with a national chain; however, they feel its impact.

“Of course, it is not cheaper than a corner store because OXXO may have many services, but the mom-and-pop groceries will not disappear.”

Alfredo Ramírez, a Veracruz grocery store owner for more than 30 years, says, “Before, I was the only store in the neighborhood. People bought goods from me because [coming here] was cheaper than going to the supermarket, also because it was close by.”

However, things have changed.

“Now, there is an OXXO a block from where I am. People go to pay for services that they couldn’t with me, including water, electric bills and even the Internet. I still offer some products that you can’t find in those stores, such as fruits and vegetables. My regular customers keep coming to me for small purchases,” said Ramírez.

People wonder what the word OXXO means. It comes from the percent symbol (%), which was how the company advertised itself before it got established as OXXO.

The Mexican multinational company FEMSA,  the bottling company of Coca-Cola’s soft drinks, and the beer company Cuahtémoc created OXXO in 1997. The first OXXO store was meant to sell snacks, cigarettes and beers to the population of the northern city of Monterrey.

After the first Monterrey OXXO, the company built stores in other northern cities, including Chihuahua, Hermosillo and Mexicali, between 1978 and 1982. Now, it’s developed the position of “Store Leader,” through which employees could live “the experience of a small businessman, backed by a major corporation like OXXO,” according to the company’s website.

As a result, the chain spread throughout Mexico, as well as Colombia, Chile, Peru, Brazil and the United States.

The first big brands that OXXO sold were Coca-Cola and Jugos del Valle, making their way for more than 10 years. PepsiCo’s products joined the list in 2010.

Later, OXXO stores opened small departments within their buildings, including a bakery, an ice cream parlor and even a butcher or greengrocer, part of the OXXO Super created in 2014.

OXXO is not a franchise chain, according to FEMSA. It operates under a Mercantile Commission contract that works as a quality-control filter, keeping a tight rein on products and services. Investors cannot buy a single OXXO store. This structure sets OXXO apart from mom-and-pop stores. OXXO rents locations, putting financial resources into stores rather than investing in real estate. Plus, it works with various distribution centers to increase inventory.

«Previous Post
A Bowl Of Birria Will Raise The Dead»Next Post
Paycheck It Out: Biden Widens Eligibility For COVID Small Business Loans