The charge of “glorifying terrorism” had led to 122 prison sentences and impacted 153 people. 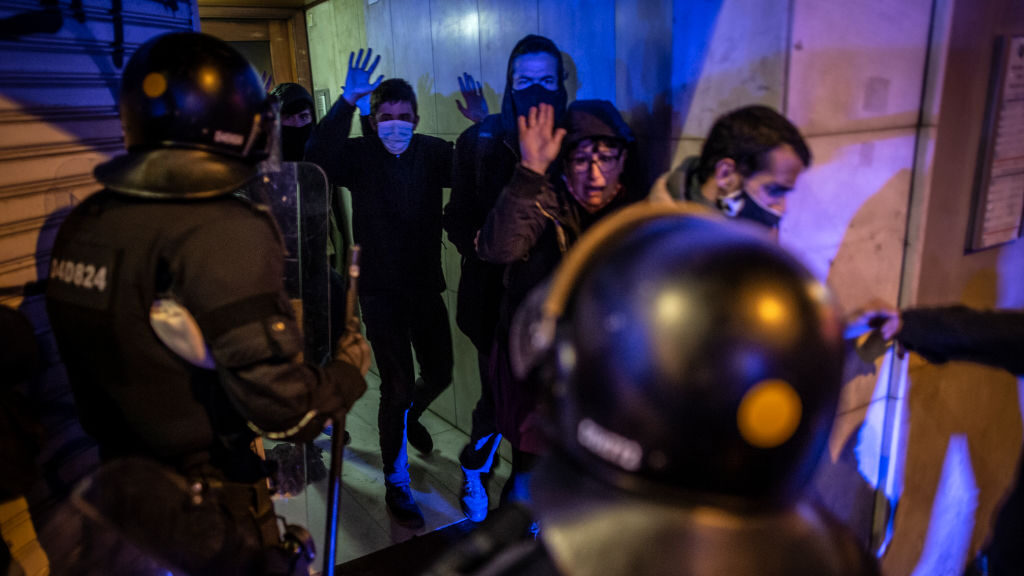 MADRID — Spain has decided to reduce its restrictions on free speech. The recent ruling comes in the wake of angry national protests over the Feb. 16 sentencing of rapper Pablo Hasel, who was jailed for a song and tweets.

Alfredo Remírez, the first person sent to prison in Spain for a message on Twitter, said: “I had to pay the piper, but if I am the last prick it will be great.”

From 2004 to 2020, the Spanish National Court has held 177 trials for this crime and sentenced 158 people to prison. Eleven have been absolved by the Supreme Court, as it appears in the Judicial Documentation Center of the Spanish General Council of the Judiciary.

(In Spain, if a sentence is less than two years and one day and the convicted person has no criminal record, the judge usually cancel the prison sentence.)

On Feb. 16, Catalan rapper Pablo Hasel was sent to prison. He was sentenced in 2018 to nine months for glorifying terrorism and for insults against the Crown and state institutions. The sentence was for 64 messages and a song published on social networks in which he accused the royal family of participating in “mafia businesses,” called the Spanish police “torturers” and denounced the death in prison of members of GRAPO and ETA, a separatist Basque group.

A week before, the Ministry of Justice announced it would review crimes of expression so only behaviors that put public order at risk would be punished with penalties other than jail.

Catalan lawyer Benet Salellas said the changes announced are not enough. “Fines can also lead to prison if they are not paid,” he said.

One of Salellas’ cases was representing activists Jaume Roura and Enric Stern, sentenced in 2008 for burning an image of King Juan Carlos I. They were sentenced to 15 months, punishment replaced by the payment of 2,700 Euros ($3,300).

In 2018, the European Court of Human Rights (ECHR) condemned Spain for violating Roura and Stern’s freedom of expression.

The Spanish Government announced the changes after a partner in the coalition Government, the left-wing Podemos, asked to eliminate these crimes. “Given the imprisonment of Hasel, we have requested urgent processing,” explains Enrique Santiago, congressman of Podemos.

Blasphemy as a crime

The Spanish Penal Code punishes the interruption of religious acts (six months to six years if it is committed in a place of worship), the offenses to religious feelings (fine) and desecration (six months to one year or a fine). Several such cases include:

In April 2017, the Provincial Court of Girona condemned a man to six months for shouting “abortion, free and gratuitous,” while a mass was celebrated.

Injury to the Crown and outrages to State institutions

The cover of the Spanish magazine El Jueves on July 20, 2007 was seized by order of the National Court. The illustration showed King Felipe VI and Queen Letizia having sex, while Felipe IV said it this was the closest thing to work he had ever done in his life. The article was referencing the 2,500 Euro ($3,039) aid to couples who had a child. The authors were sentenced to pay a 3,000 Euros ($3,647).

Anyone who insults the king, the queen, their descendants or ascendants s subject to the Spanish Penal Code, which carries a punishment from six months to two years in jail or fines.

In 1981, Xabier Sánchez, director of the magazine Punto y Hora, was sentenced to one year for criticizing the visit of Juan Carlos I to Basque Country. He was in prison from April 1983 to January 1984.

Twenty-five years later, Arnaldo Otegi, was sentenced to one year for calling Juan Carlos I “king of torturers.” The sentence was described in 2011 as excessive by the ECHR, which ordered Spain to pay 20,000 Euros ($24,317) to Otegi. At the time, Otegi was a member of the Basque Parliament.

Rapper Valtonyc, who has lived in exile in Belgium since 2018, was sentenced to three and a half years’ in prison — one year for insults to the Crown, two years for glorification of terrorism and six months for threats.

The crime of opinion was created in 2000, and it punishes expressions that praise a crime or its perpetrator with the goal to incite to commit a crime. The penalty was one to two years in prison.

In 2004, the Spanish National Court published its first conviction against Otegi. He was sentenced to 15 months in prison by the Basque Superior Court of Justice because he attended the funeral of a member of ETA, who died because the explosives she was manipulating exploded at her home.

In those years, the National Court held 26 trials that affected 45 people. Some 19 were sentenced to one to two years for graffiti of banners about ETA, or for exposing pictures of his members. One of those people was Remirez, who exposing a doll representing an ETA prisoner. He was sentenced to one year in jail, but the prison entry was suspended.

Members of the music group Soziedad Alkoholika were also charged with glorification of terrorism because of their songs. They were absolved in 2006.

In 2015, the Government reformed the penal code to increase the penalty for exalting terrorism for up to three years in prison. The National Court had held 15 trials for glorifying terrorism on social media this year.

Remirez was arrested again in 2015 for publishing tweets mentioning ETA and was sentenced to one year and six months. He became the first person to go to jail for his social-media posts.

Between 2012 and 2015, 23 people were convicted of glorifying terrorism because of messages on social networks. Their sentences ranged from six months to two years in prison. Between 2016 and 2020, the Spanish National Court held another 86 trials. Only 23 ended in absolution.

Crimes of glorification of terrorism, insults to the Crown and state institutions and offenses to religious sentiments may soon cease to be punished with prison terms, but will continue to carry fines.

“The government announcement does not solve the problem, it camouflages it. The debate on the concept of freedom of expression is still intact,” said Salellas.