Drummer Jeffery B. Suttles Showcases His Talents In ‘Coming 2 America’

The upcoming sequel to the classic Eddie Murphy movie reunites the veteran musician with the baddest band in the land. 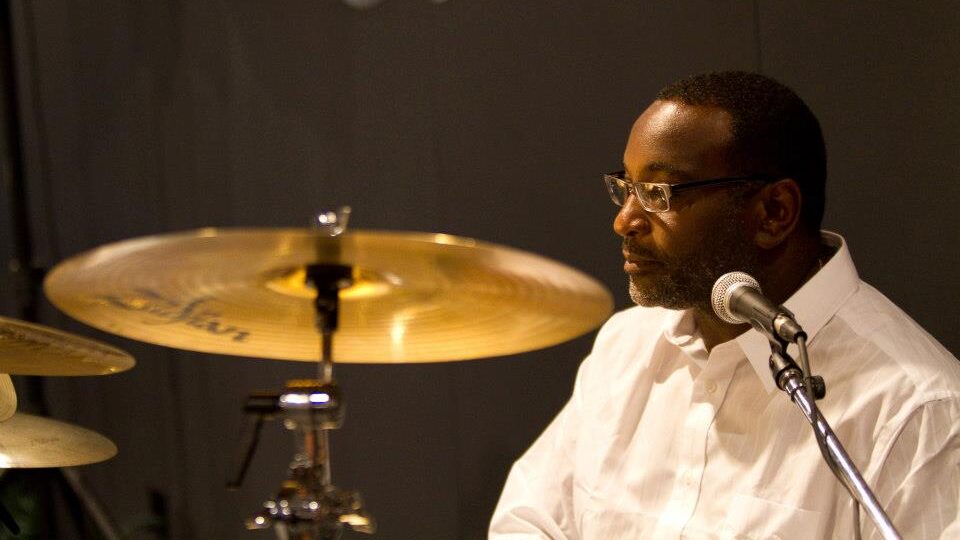 Jazz fans known Jeffery B. Suttles as an accomplished drummer who entered the industry under the watchful eye of the late great Leon ‘Ndugu’ Chancler. Leaving his college football days behind, he traded the gridiron for music. While touring with Chancler, Suttles caught the attention of another legend, Bill Withers.

But Eddie Murphy fans know him as the bandleader and drummer of Sexual Chocolate from “Coming to America,” the 1988 comedy.

Suttles is a multifaceted performer.

He’s played with some of the world’s most popular musical figures, including En Vogue, Quincy Jones, Sheena Easton, Teena Marie. Considered a force on the jazz circuit, Suttles showcases his range and smooth arrangements through 10 mellow tracks on his 2005 album “Time to Suttledown.”

And he’s back, briefly, on the big screen. “Coming 2 America,”  the Murphy sequel, is streaming March 5 on Amazon Prime Video. Randy Watson, one of the characters Murphy plays, and his band Sexual Chocolate, led by Suttles, return, too. The band is best known for its off-key rendition of “Greatest Love of All.”

This round, Suttles plans to capitalize on opportunities that arise from the movie’s popularity.

Zenger News spoke with the talented jazz artist to discuss working with Murphy and the lessons he’s learned from musical greats.

Zenger: How are you?

Suttles: Everything is going good. Ducking and dodging during this time.

Zenger: How did you get started in the music industry?

Suttles: I got started around 1984 with my professional career. Prior to that, I was mostly an athlete, but I got pulled off the athletic field by a famous drummer, Ndugu Chancler. Was his drum tech when he went on the road with the Jazz Crusaders in ’84, and that’s the beginning of it. That next year, I decided that’s what I wanted to do. My first gig in ’85 was Bill Withers. Started from there.

Zenger: We lost Mr. Withers last year. He was always so underappreciated to me. How was it to get your start with him?

Suttles: It was amazing. It was the first time. … I was not very young, but it was my first gig. Like his songs, he was insightful, a mentor-type, father-figure type guy. His brain worked a little different from everybody else — he told me a few things about myself that calmed me down. When you’re a football player, you have a certain temperament, and he helped me out with that.

Zenger: Losing legends is never easy. I know you have a decorated history with many who are gone. Any personal losses that impacted you directly?

Suttles: Some have affected me personally. I played for Teena Marie for about six or seven years. I lost her some years back. Cicely Tyson sticks out I really was a big fan of hers.

Zenger: When you’re around these talented musicians, are you soaking it all up, asking questions and picking their brain?

Suttles: That’s part of it. First and foremost, you gotta learn the music and learn it in the authentic way they played it back in the day. I grew up on that kind of stuff. That part wasn’t difficult for me, because that’s part of how I trained myself. But then you kind of acclimate yourself to the musicians around you — the philosophy  they wanna put across with the show. And you insert yourself in that whole system of teamwork.

Zenger: Music has changed so much over the years. Has it become difficult to keep up with what’s hot and what’s not. Or do you just remain true to who you are and let the rest fall into place?

Suttles: I call it keeping a pulse with the streets. Like you said, music has changed so much, and it’s so different. A lot of the stuff now doesn’t have a lot of instrumentation. But the feel of it is still there. You just gotta listen to it, grab a little of it. If you ever put yourself in that position, just do the best you can to kind of emulate what they want these days, because it’s a different pulse for different generations.

Zenger: “Coming 2 America” is a highly anticipated sequel to “Coming to America.” How did you get involved in the first one and now the sequel?

Suttles: In the early part of my career, I would do gigs and I was still working jobs, too. One of the jobs I had was a driver for [director] John Landis during his “Twilight Zone” case. After that was over, I was back on the scene. I was in Stockholm, Sweden, and Landis called me. He told me about being a production assistant on “Coming to America.” I thought it was more of a payback for supporting him through that time. The next day, I told him yes. He knew I was a musician. During the taping, they came to me and said: “Jeff,  can you put a band together for me?” And I told them, “Yeah!” That’s how Sexual Chocolate became a thing. Eddie Murphy was the one that named the band.

Zenger: To see Eddie Murphy in his element, being the consummate pro, that has to elevate the entire set to another level.

Suttles: Very much so. He was really a nice guy to meet. He was very cordial toward me. I met him, and watching him work was a pleasure. It showed me another part of the entertainment business. I felt if I was to ever leave music — and I wouldn’t ever want to leave music — I would want to be involved in making movies and stuff like that. I walked through Paramount one time and I said, ‘I really like this.’  Then I just went back to work, but I had to acknowledge it.

Zenger: To see Eddie Murphy and Arsenio Hall participate in so many roles in one movie, what does that look like up close?

Suttles: It was really amazing to see when he came out in that Randy Watson character, because I played with a guy who looked exactly like that. He was a blues singer. I’m telling you, same color suit and everything. I did a “Wow!” sitting on the drum set.  To see him do what he did, because there were various takes. His improv is amazing. I must say, he changed up. When he got direction, he would just switch and pop it on immediately.

Zenger: And it helps that he can carry a tune. Eddie Murphy has a great singing voice.

Suttles: He actually can sing. I know if I was to produce something on him, I wouldn’t shy away from dealing with him as a singer, because he can sing a little bit.

Zenger: What are you working on or have out right now?

Suttles: I’m going to be doing another album. I have an album out already called “Time to SuttleDown.” Also, I want to take the Sexual Chocolate band and try and do something this time. Last time, we just kind of let it go and let other people do what they wanted with it. But we’re going to have the original guys, and we’re going to do something this time. I also have a rehearsal space in Los Angeles in the Inglewood area, not far from The Forum, called 8th Avenue Sound. So I have a couple of business ventures I’m dealing with.

Zenger: Has the pureness of music been jeopardized somewhat over the years, and is that something you are trying to restore?

Suttles: It has lost a little bit, but there are enough musicians that want to do things the right way. Not saying that the other way is the wrong way, but it’s different from what we’ve had to do to become musicians. We had to really practice and hone our craft. They do, too, but it’s just different. We had to be able to play a little bit of something, chordal sense and pitch and things like that. They’re very heavily groove-oriented, which is a big part of music, so I definitely think it has changed. That is no knock to them because some of the stuff that is out there, I actually really like.

Zenger: Do you remember the best advice you received along the way?

Suttles: Ndugu, who mentored me, told me to always stay true to myself — to trust my ears and what I feel and what I hear. Sometimes, I doubt myself and the talent … whatever little talent I have comes through, and it helps get me through everything. Him telling me that — stay true to myself, but be open to the new things in music — has helped me out the most. I can’t wait to get going again, let the band play and just spread love through the music.