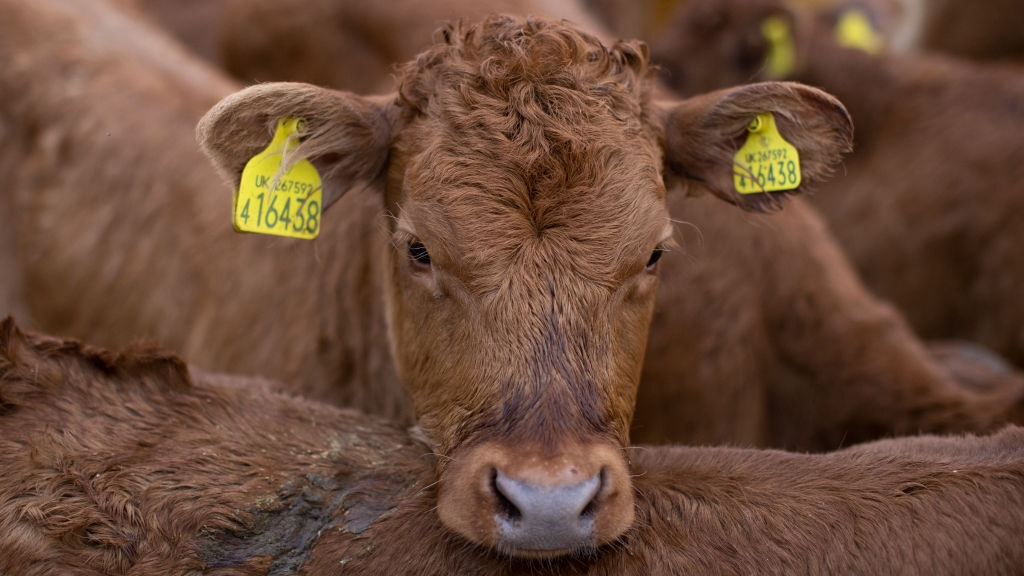 Manure from dairy cows like these in central Israel could be turned into fertilizing powder. (Dan Kitwood/Getty Images)

RAMAT GAN, Israel — An invention originally designed to transform dog droppings into odorless powder is being tested as a solution for the animal waste plaguing livestock farms and slaughterhouses.

Israel’s Paulee CleanTec, which holds patents for eco-friendly management of human and animal waste, recently installed one of its demo BioLizer systems at a kibbutz dairy farm.

“We can convert half a ton of fresh animal manure into odorless organic fertilizer in one hour,” says CEO Ilan Levy. “If you have 300 dairy cows, they generate a ton of liquid waste every hour. This is equivalent to wastewater from a town populated with 40,000 people.”

Aside from the stench, the problem is that modern intensive factory farms are drowning in dung.

Globally, hundreds of millions of tons of untreated or improperly treated waste are discharged into waterways and absorbed into the soil, contaminating crops and drinking water with pathogens such as salmonella, E. coli and fecal coliform.

“When huge amounts of waste are produced in one concentrated area, there is no safe and cost-effective way to use it efficiently or get rid of it. The problem will never end as long as agriculture, meat, egg, and milk production continue to rely on animal confinement,” says Levy.

The powdered fertilizer can be stored safely for the farm to use, sell or trade.

“In the near future, we can eliminate the current practice of on-farm storage of fresh animal manure that is required on livestock farms,” says Levy.

“Animals drop manure all year, but it can only be applied on fields during certain seasons. So every farm — whether raising pigs, cows or chickens — must store manure. In certain European countries, up to nine months of onsite manure storage capacity must be installed,” Levy explains.

As it decomposes, the manure emits noxious, smelly gases. And the pits may leak or spill over, as happened in 1999 when many North Carolina manure lagoons spilled into waterways during Hurricane Floyd.

It all started with a pug

Paulus’ owner, entrepreneur Oded Halperin, got fined one day for failing to pick up after his dog. He urged his friend, nano-biotech pioneer and serial inventor Prof. Oded Shoseyov of the Hebrew University, to find a cleaner, greener solution for dog doo disposal.

Shoseyov, who has spun 15 startups out of his 94 patents — including SavorEat printed alternative meat, CollPlant regenerative medical materials and GemmaCert quality analysis for cannabis and hemp — deemed the assignment impossible until Halperin thought about incinerating the waste chemically.

The two Odeds founded Paulee CleanTec in 2008 to create an efficient and sustainable solution for managing human and animal waste. Halperin chairs the company, which last year received a $2 million investment from Doral Infrastructures.

While working toward commercialization of its solution for the pet market, Paulee CleanTec expanded due to interest from other sectors.

“Ludologic, our Brazilian affiliate, is about to initiate a large project in a municipal sewage treatment plant,” says Levy. “For the past three years, they ran three field trials using our organic fertilizer in growing coffee, soybeans, corn, oranges and sugarcane.”

And let’s not forget toilets

The Bill & Melinda Gates Foundation’s “Reinvent the Toilet Challenge” awarded a grant to Paulee CleanTec in 2012 as part of its search for safe and sustainable sanitation technologies for the approximately 2 billion people lacking toilet facilities.

Paulee technology could theoretically transform sanitation on airplanes and cruise ships as well. Passengers on an average long-haul 747 flight flush about a ton of stinky waste into holding tanks. Converting it into odorless powder would benefit the passengers, the fuel gauge and the workers who have to empty those tanks.

But for now, livestock manure is the company’s central focus.

“We realized if our technology is good for pets and humans, it would work with any animal,” Shoseyov said.

“All feces have a common feature — an anaerobic environment that generates a really bad smell. On the other hand, there is a lot of energy stored in the feces. Bedouins even collect camel dung as a fuel to cook with,” he says.

“When we mix our strong oxidizer with the feces, it generates energy and heat. That immediately neutralizes the smell and in addition sterilizes the feces because of the high temperature,” Shoseyov explains.

Nevertheless, rapid population growth of people and animals demands a sustainable solution for managing all that bodily waste. And that positions Paulee to take a lead in solving a global problem.

A no BS answer to the world’s massive manure problem appeared first on ISRAEL21c.