I SAW THE SIEGE: Del. Stacey Plaskett Was Ready To Fight

VIDEO: Both a witness and a target of the Jan. 6 riot, Plaskett co-prosecuted Donald Trump in his second impeachment trial.
By André Johnson February 22, 2021
Facebook
Twitter
Linkedin
Email 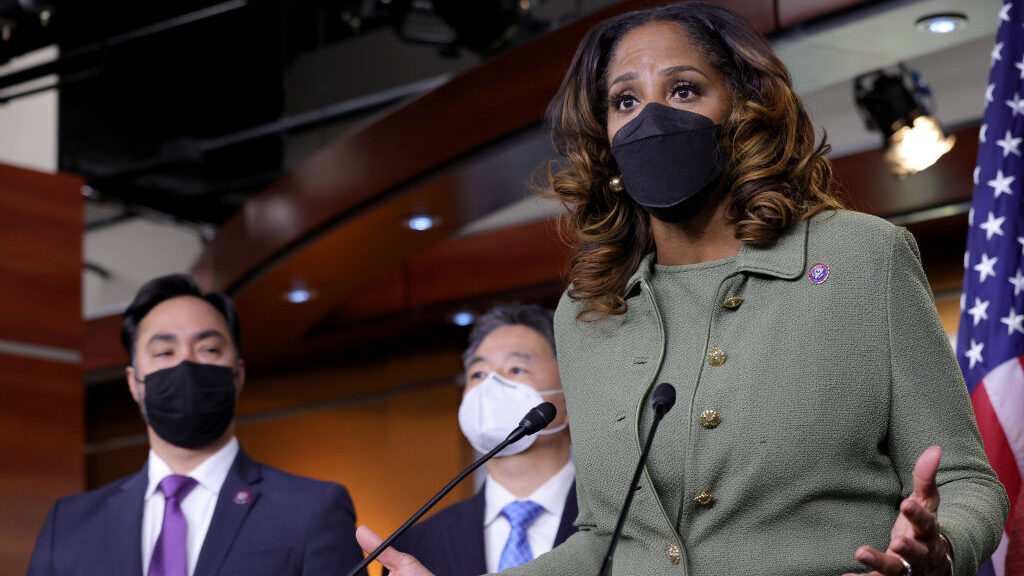 Del. Stacey Plaskett of the U.S. Virgin Islands recounts the events of the January 6 insurrection along with her concerns about the pandemic and her staff. (Win McNamee/Getty Images)

WASHINGTON — A House Democrat who co-prosecuted former president Donald J. Trump’s second impeachment trial says she was prepared to mix it up with rioters who ransacked the U.S. Capitol on Jan. 6.

Del. Stacey E. Plaskett (D-USVI) told Zenger News that as U.S. Capitol Police ordered members of Congress and their staffs to evacuate to a secure location, she was “thinking, you know — just being black — just like, “Yo! We might have to scrap!”

Plaskett said she was stunned to find that among a large assembly of lawmakers and their aides locked inside a holding room, many Republicans were not wearing Covid-19 masks. She decided to leave, she said, taking her chances in Capitol hallways to reach the safety of her office in an adjacent building.

“Republicans were not wearing masks, and we were so many of us thinking, ‘I’m out of here,’” said Plaskett. She texted her staff that she was walking back. “I’d rather be able to run from rioters and fight with them [than] from a virus that may be out in this room that I can’t see and don’t know how to fight.”

With the pandemic shrinking office staffs to skeleton crews, Plaskett’s employees were mostly at home — including the most junior. “One of the things I was thankful for is we didn’t have young staffers in the office,” she said. “I didn’t want them to feel jaded about this country and public service.”

Electoral College votes were to be counted in a Joint Session of Congress to certify the election of Joseph R. Biden Jr. And as Republicans challenged the votes from swing states, Trump’s supporters marched on the Capitol. Push quickly came to shove, and rioters breached the building.

Plaskett watched the beginning of the saga from behind a locked door, “wondering if they were going to get through and get us.” Later, in the secure room, she saw a range of emotional reactions from other congressmen and women: “Some people were shell shocked, some people were angry, some people were so sad, heartbroken.”

Born in Brooklyn, N.Y., and raised in housing projects, Plaskett has vivid memories of boarding an elevator in a low-income high rise, watching her step to avoid human waste and empty liquor bottles, pushing buttons in the hope that one would work. A world away amid suburban Connecticut greenery, she attended the posh Choate Rosemary Hall boarding school, recruited by the minority advancement organization A Better Chance.

“Having to switch between these worlds all the time” made her feel a “huge responsibility when I was [at school], to be the best,” she said, knowing that her mostly white, upper-crust classmates were watching her closely, sometimes skeptically.

“Right or wrong,” she said, “they were going to judge other black people by what I was doing.” They elected her class president more than once.

A 21-year-old Plaskett became a mother during her senior year at Georgetown University. Two more sons would join the first, none of them yet five years old, by the time she graduated from law school at American University. Future impeachment co-manager Rep. Jamie Raskin (D-Md.) was her Constitutional Law professor. Now 54, she has five children, including a sixth-grader, and one grandchild.

After tours as a New York City prosecutor, a congressional staffer and a Justice Department lawyer in the George W. Bush administration, Plaskett declared herself a Democrat in 2008. She moved her family to her “ancestral homeland” of St. Croix, a 22-mile-long island in the Caribbean Sea.

She became quickly “frustrated at the things I saw,” learning that “47 percent of children in the Virgin Islands live in poverty.”

“It’s not a paradise for a lot of people there,” said Plaskett, describing why she ran for office.

“My family has been involved in politics,” she said. “My uncles, when they came back from the Vietnam War, and before that, were involved in labor politics.” They organized cane cutters and fought for unions. On her mother’s side, she is related to Dean Hamilton Jackson, one of the Virgin Islands’ most notable labor leaders. “He fought the Danish government, when we were owned by Denmark, for us to be able to have free press.”

St. Croix gained an historical renaissance from the Lin-Manuel Miranda musical “Hamilton,” since Alexander Hamilton lived there from early in childhood until 1772, when he headed to New York in the years before the American Revolution. Hubert Harrison, a thought leader of the Harlem Renaissance, was a U.S. Virgin Islands native. So was Denmark Vesey, Plaskett said, “a man who was free and started a slave rebellion so others would be free, and lost his life for it.”

What Plaskett saw on Jan. 6, she said, was a more sinister uprising, “the attempted overthrow of the government of the United States, attempted by the president, Donald John Trump, inciting an insurrection to retain power. By any means necessary, right? He had run out of nonviolent means.”

Trump, Plaskett said, took “the frustration, ignorance and hatred of people” and directed their outrage “to our seat of democracy, to try and assassinate the Vice President, simply to maintain power. I think that’s what people saw. That’s what I hope they saw.”

With the rioters gone in the evening hours of Jan. 6, and with government workers cleaning up after them, lawmakers considered their options. The U.S. Constitution requires them to certify the presidential election on that specific date, but there was blood in at least one carpeted hallway and broken glass peppered the marble everywhere.

“A lot of people were like, ‘Let’s go home, let’s come back in the morning and get this done,’” she told Zenger. “And members were like ‘Hell no. This is going to happen tonight.’” Congress resumed its Joint Session at about 8 p.m. and finished its duty at 3:32 a.m. Plaskett remembers “leaving the Capitol late, late, late at night. And the utter silence.”

“When I finally left I felt exhausted,” she says. “And bewildered, about what was going to happen next.”