Family members are expected to have died of thirst and hunger trying to flee the conflict in Sudan.
By William McGee February 21, 2021
Facebook
Twitter
Linkedin
Email 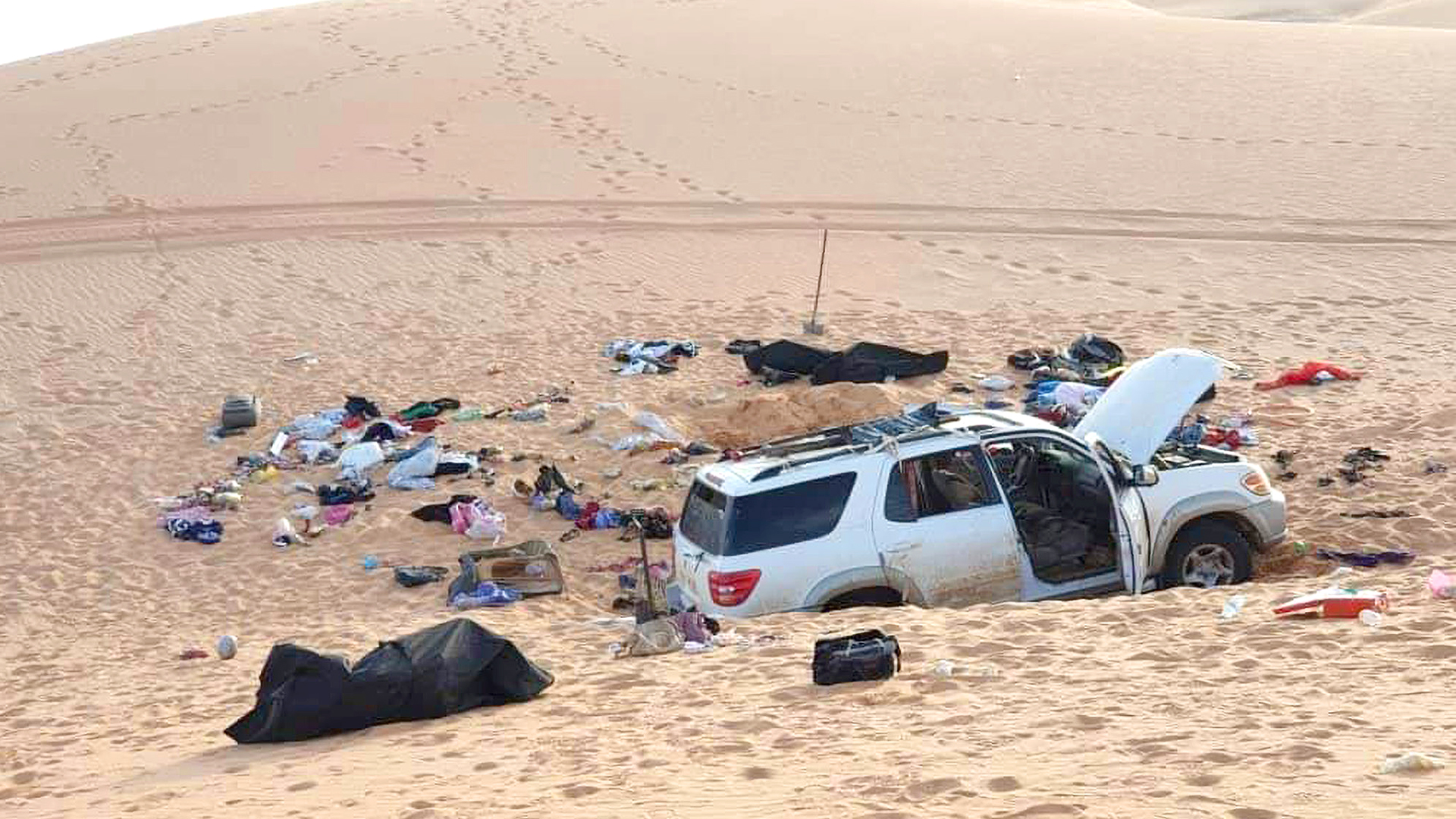 The car of the eight Sudanese members who were lost in the Libyan desert and died of starvation and thirst. (The Kufra Primary Prosecution Office/Newsflash)

KUFRA, Libya — The Kufra police found eight bodies belonging to one family, all of whom died after they lost their way in the Libyan desert.

Images of the tragedy show the relatives’ dead bodies, along with their belongings, strewn around the vehicle, some of them already partially buried in the sand. It was alleged that 13 others were missing after their car broke down in the desert. All the people are expected to have ended up dying of starvation and thirst.

As per the local media, 21 people were traveling on a Toyota Sequoia when it broke down in a tranche of the desert 400 kilometers (249 mi) south-west of the Libyan oasis town of Kufra.

The officials found a moving letter in which a woman appears to be aware of her impending fate. “Forgive me, my mother, for not having reached you,” the letter read.

The dead bodies of five men and three women were found by the car, and the remaining passengers, reportedly including children, are believed to still be missing in the desert.

An investigation by the Libyan police concluded that the family left the city of Al-Fashir in Sudan in August last year and were believed to be headed to Kufra, which is a transit point on one of the migrant routes to the Libyan coast.

As per the Libyan authorities, a report was received by the Kufra police station on Feb. 10, stating a traffic accident had occurred. As soon as the concerned authorities arrived at the site of the accident, the motorized vehicle was found, along with a number of bodies, clothes and a bag.

After the inspection of the vehicle, two identity cards of Muhammad Emuhammed and Mona Muhammad were retrieved from the location. Both were from Al-Qasim Al-Fiqi.

The vehicle was found early last week, some six months after the group’s departure, with a handwritten note inside penned by one of the family members named as Muzna Saifuddin Hasan.

The investigation into the incident is ongoing and is trying to locate the other 13 people missing in the desert.

The Libyan Desert forms the northern and eastern parts of the Sahara Desert. It describes that part of the Sahara that lies within the present-day state of Libya.

As per the UN Refugee Agency and Danish Refugee Council’s Mixed Migration, an estimated 72 people die each month on treacherous land routes to Libya from east and West Africa before they attempt to cross the Mediterranean Sea.

“The report found that at least 1,750 people died, and many others were subjected to extreme violence at the hands of smugglers, traffickers, militias and State officials while attempting the journey to Libya in 2018 and 2019,” it said.

“Around 28 percent of those deaths happened during attempts to cross the Sahara Desert. Other hotspots included southern Libya, Agadez in Niger and the Malian capital of Bamako. Nearly a third of respondents interviewed by the MMC had witnessed or survived sexual violence.”

More than 6,200 refugees and migrants have been intercepted at sea by the Libyan Coast Guard and returned to Libya so far in 2020 compared to 9,035 during the whole of 2019.

“This situation has been compounded by regional conflicts in other parts of Sudan and wars in neighboring countries,” states an article ‘The impact of war on women and children: case study of Sudan’ by the National Library of Medicine. “The consequences of war are taking their toll on the entire region and are intensified by environmental hazards, desertification, drought, and famine.”

The victims of the war are civilians who are forced to choose between disastrous alternatives: if they flee, they lose their homes, their livelihoods, and their communities; if they stay, they watch these things being destroyed around them.