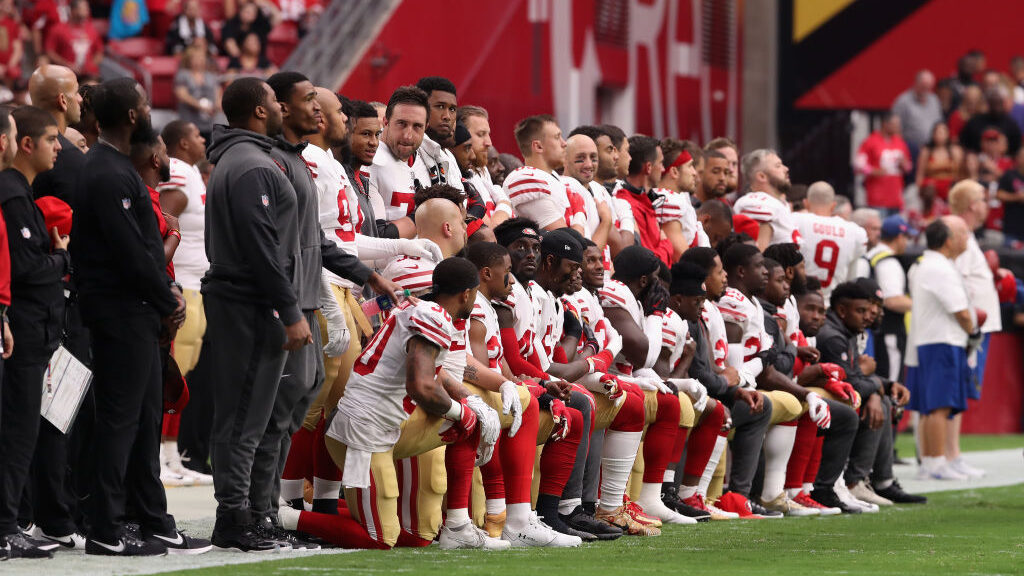 Members of the San Francisco 49ers kneel for the National Anthem before the start of the NFL game in 2017 to support the Black Lives Matter movement, and shining a light on black activism.(Christian Petersen/Getty Images)

Negro League Baseball and Black College (what we now call HBCU) sports would have been totally omitted from American sports history without journalists of color and minority publications to tell their stories. The Amsterdam News, Afro American, Atlanta Daily World, Pittsburgh Courier and Jet Magazine made athletes who were American afterthoughts into legends despite mainstream media denying their achievements by ignoring them.

The synergy between black athletes and black journalists has become a powerful force: Chronicling athletes’ experiences and the obstacles they overcome has helped swing the pendulum of social consciousness.

The relationships formed by enterprising black journalists like the late Bill Nunn Jr., Sam Lacy and Howie Evans allowed the stories of Satchel Paige, Josh Gibson and Jackie Robinson to be told. Their coverage helped desegregate the three major professional leagues, which had to confront the struggles of the trailblazing athletes who had been relegated to second-class status because of their color.

The Marketing Opportunities in Business and Entertainment Symposium’s MOBE Monday event on Feb. 15 was a panel discussion on black activism and equality in sports. Two-time NBA and three-time 3-point shooting champion Craig Hodges, a vital contributor to the Chicago Bulls’ first two championships, spoke. So did Olympic gold medalist and tennis champion Zina Garrison and Scoop Jackson, a senior writer for ESPN Features Unit and SportsCenter, and chief content and copy writer for Nike.

The panel discussed how contemporary black athletes are using their platforms and influence with more force than ever to change racial inequities in American society. They considered how Colin Kaepernick’s activism likely cost him a long-term NFL opportunity even after leading the San Francisco 49ers to a Super Bowl appearance, and whether recent events are forcing sports teams, leagues and organizations to rethink previous concerns about athletes exercising their First Amendment rights.

“We’ve actually crossed over into a space that we’ve never been before,” Hodges said. “When it’s your chance to step up you do so, and that’s the love and beauty of what’s going on now with social media and young activists.”

Like Kaepernick, Hodges’ career was cut short due to his activism. When the Bulls visited the White House after their 1992 World Championship he dressed in a dashiki and delivered an eight-page letter to President George H.W. Bush protesting the government’s treatment of minorities. Before the start of the NBA Finals series against the Los Angeles Lakers that season, he suggested a protest prior to Game 1 to bring attention to the league’s lack of black ownership, but it was thwarted by pushback from Earvin “Magic” Johnson and Michael Jordan. That was his last season in a Bulls uniform: The team didn’t re-sign him after he missed the following year with an injury.

Jackson was surprised to see pushback after Jacksonville Jaguars coach Urban Meyer hired former Iowa Hawkeyes strength and conditioning coach Chris Doyle, who left Iowa after allegations of racial disparities. That pushback was “thanks to a brother like Craig Hodges,” he said, and today’s activism in sports is in part a result of  “what he had to go through and what he did.”

Garrison had to break through many barriers as a young black woman from a community where there were no role models in tennis. She made her mark on the tennis world by winning both the Wimbledon and U.S. Open junior titles in 1981. In 1983 she ended her first full tour ranked No. 10 in the world, and remained in the top 25 until 1995.

“I was definitely thrust into [activism],” Garrison said. “The great Arthur Ashe told me immediately when I came on the tour that … I was going to be a role model and I was going to be speaking out for the people. That’s just part of it.”