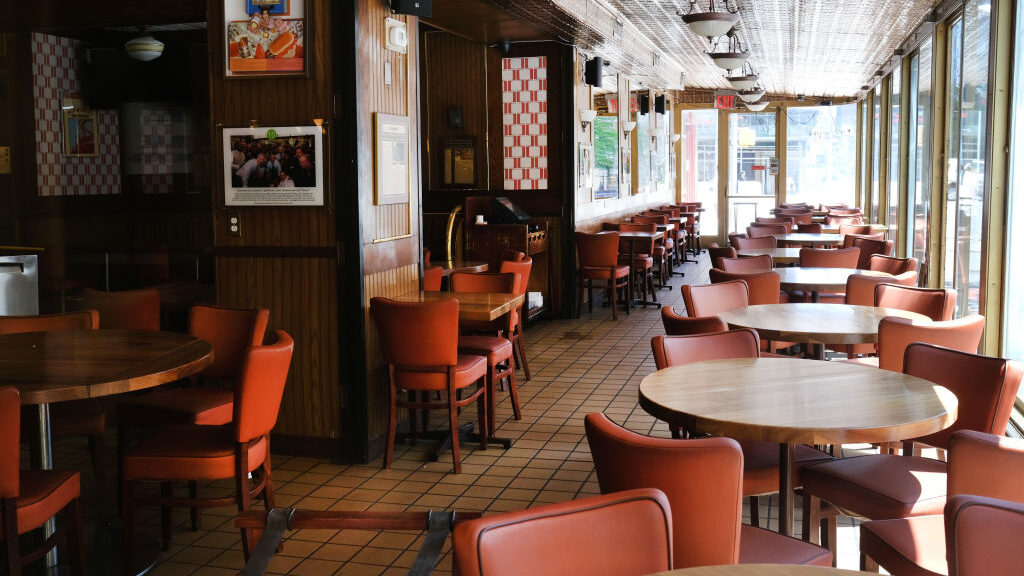 Many restaurants operated at limited levels throughout the Covid-19 pandemic and could be facing wage violations as a result of not getting access to pandemic aid passed by Congress. (Spencer Platt/Getty Images)

The Department of Labor has axed a program that let businesses report wage violations to avoid penalties.

The department announced in a statement on Jan. 29 that it was discontinuing its pilot program for businesses to voluntarily report and repay underpayment of federal minimum wage and overtime violations to employees.

The 2018 program allowed employers to self-report these violations under the Fair Labor Standards Act to “avoid litigation, penalties or damages, and prohibited affected workers from taking any private action on the identified violations,” per the department.

The primary goals were to resolve claims quickly without litigation, to bolster “employer compliance with overtime and minimum wage obligations, and to ensure more employees receive the back wages they are owed — faster.”

The program only operated at the federal level. Employers were still subject to state agency action if appropriate.

The Payroll Audit Independent Determination, or PAID program utilized an online portal called Workers Owed Wages that posed a series of interactive questions to workers who believed they were owed back wages.

Any unpaid wages reported by employers were listed in the database searchable by worker name, and workers were directed to the closest Wage and Hour Division office for resolution of the amount they were owed. The caveat: The program limited filing lawsuits and involving employers in future claims.

Some information regarding the program’s effectiveness has been removed from the current Department of Labor website stating: “As of January 20, 2021, information in some news releases may be out of date or not reflect current policies.”

In a July 2020 statement, the Wage and Hour Division reported the program resulted in “more than $7 million in back wages found for more than 11,000 workers.” The report gave analysis of data collected from April 1, 2018, through Sept. 15, 2019, and suggested “self-audits allowed [Wage and Hour Division] to increase back wages delivered to employees with minimal impact on existing priorities and resources.”

But a report submitted to the Senate Appropriations Committee on Sept. 29, 2020 citing total payments back to employees has been removed. Even though the report boasted average back pay at $55,828, the median was actually $7,898 — with stark differences in the real amount received by employees remunerated under the program. According to the departmental report, “Over half of cases (51%) resulted in back wages under $10,000, including two cases with no back wages, while 10 cases found between $110,000 and more than $746,000 in back wages.”

Cheryl Stanton, the former administrator of the Wage and Hour Division, stated in a July 14, 2020 news release: “For employers that missed payroll, or otherwise inadvertently found themselves in violation of the FLSA as they dealt with the effects of the coronavirus, PAID allows them to step forward, pay their workers the wages they earned, and get back to business.”

“Workers are entitled to every penny they have earned,” said Looman. “The Payroll Audit Independent Determination program deprived workers of their rights and put employers that play by the rules at a disadvantage. The U.S. Department of Labor will rigorously enforce the law, and we will use all the enforcement tools we have available,” she said in the Jan. 29 release.

Looman was formerly executive director of the Minnesota State Building and Construction Trades Council. Construction, restaurants, building maintenance and other industries are considered some of the most likely offenders of wage and hour violations.

A significant portion of those employers owing back pay were state and local governments that would not have been required to pay back liquidated damages and had a shorter ‘lookback’ period of two years, instead of the maximum three years. The Wage and Hour Division could have sought pre-litigation liquidated damages in some cases of egregious or willful violations, but as of July 1, 2020, approval was required to take such action.

Federal overtime regulations are clear. Waiving overtime by mutual agreement is a violation, despite any extenuating circumstances as a result of pandemic staffing shortages. As of right now, there are no additional programs for employers impacted due to the pandemic.

However, the Department of Labor still supervises settlements according to the Fair Labor and Standards Act, which states: “The Secretary [of Labor] is authorized to supervise the payment of the unpaid minimum wages or the unpaid overtime compensation owing to any employee or employees.”

Small business employers confronted additional wage and hour violations over fallout from pandemic-forced closures. They also faced issues with the administration by some banking institutions of the Paycheck Protection Program (PPP) created by the Coronavirus Aid, Relief and Economic Security (CARES) Act, signed into law on March 27, 2020.

The failure to administer the Paycheck Protection Program properly under Inspector General Glenn Fine, who was removed April 7, 2020, added to the economic instability. (Fine was appointed by Congress as the chairman of the Pandemic Response Accountability Committee — a watchdog panel created to oversee fair distribution of the $2 trillion CARES Act provisions.)

Following that, larger, high-revenue companies received loans in the millions. Other businesses had difficulty navigating the process of finding a lender, and many larger banks would not loan the federally backed disaster aid funds with loan-forgiveness options to new account holders, only those with accounts existing prior to March 2020. However, state and locally mandated closures only began in March 2020, due to the coronavirus outbreak.

The disparity in disbursements was met with tremendous public outcry, as small businesses were left waiting for funds. Additional funding was provided April 24, 2020 by the Paycheck Protection Program and Health Care Enhancement Act, which addressed the funding shortage and panic of small businesses that applied but were left in limbo.

A second round of Paycheck Protection Program business loans was made available to “first-draw” applicants in Jan. 2021 — meaning a contingent of eligible businesses still have not received federal disaster aid funds for almost a year.

Second draw loans are now available, and a second round of applications are open for those who did not receive funds previously. “The [Small Business Administration] is working to ensure the economic aid is accessible to all that are eligible, including those hit hardest, while protecting program integrity and ensuring as quick distribution as possible of the aid,” public affairs officer Shannon Giles told Zenger. “The agency is conducting extensive outreach campaigns so there is full awareness of what’s available to those affected.”

However, Paycheck Protection Program loans are not made by the Small Business Administration, which states:

“The lender then reviews the borrower’s application, and if all the paperwork is in order, approves the loan and submits the information to SBA. All PPP loans are subject to SBA review and all loans over $2 million will automatically be reviewed. Eligibility and compliance will be reviewed during the loan forgiveness process.”

It is thus still important to maintain good records and for employers to take every action possible to avoid the occurrence of enforcement issues. More developments are likely on the horizon under the Biden administration.