Popcorn With Zenger: Mike Cahill’s ‘Bliss’ Leads Only To Misery

After a strong start, film degenerates into an impossible-to-decipher world stuck between ‘The Matrix' and mental illness.
By Jacob Smith February 18, 2021
Facebook
Twitter
Linkedin
Email 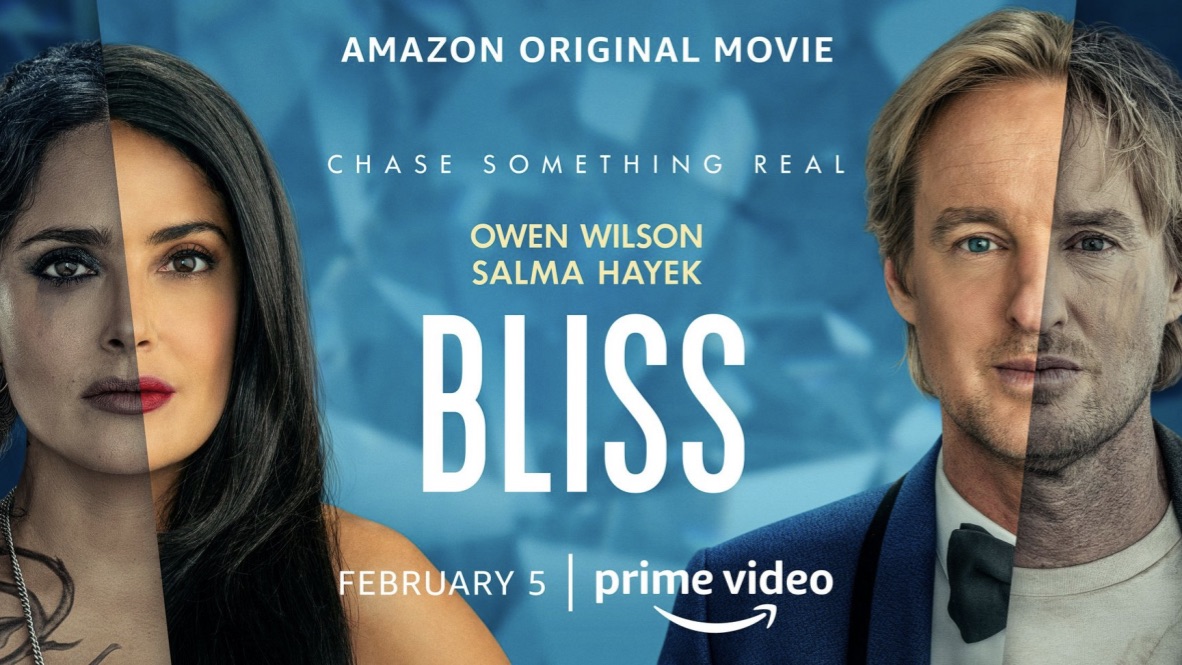 Despite an enticing plot line, Amazon Studio's "Bliss" fails to deliver an adequate conclusion to the exciting mystery that the trailer promised. (Prime Video/@PrimeVideo)

In a film based on the saying “ignorance is bliss,” it’s almost poetic to say the less you know about this movie, the better.

The Story: In a world stuck between fantasy and reality, Greg Wittle (Owen Wilson), a recently divorced father, is a man who struggles to survive his surroundings. Greg is fired from his job due to poor performance and accidentally kills his boss in a moment of rage. Freaked out by his actions, he races down to a bar where he meets a woman named Isabel (Salma Hayek), who knows more about him than he does. Isabel tells Greg he is living in a simulation and that the world around him is fake. Greg begins to yo-yo between what is real and what is not. The deeper he goes, the more questions he has and the fewer answers the viewers receive.

Bright Spots: The only credit a film like “Bliss” deserves goes to the team at Amazon Studios, which put together the trailer for the movie. In two minutes and forty-six seconds, that trailer did more to make audiences believe “Bliss” is an exciting mystery that takes elements from films like “The Matrix” and “Shutter Island.” A movie bends the fabric of reality, leaving you wondering to the very end what is fake and what is real. That is where the praise ends.

Weak Spots: “Bliss” dupes its audiences into thinking producers had any idea what to do with the great premise they were given. It takes skill to drop the ball on a film that tackles mental illness, drug abuse, fantasy, sci-fi and geopolitics, but director/writer Mike Cahill does so in epic fashion.

Stop scrolling to take in all that is @SalmaHayek. pic.twitter.com/IDYX41cYNb

The introduction to the film is so well-done it is hard to believe the rest was completed by the same person. In the opening act, Greg is established as a man who may or may not be dealing with issues of his mental sanity. The film does a great job by tossing in subtle clues that play into audience theories on what exactly is happening. In one scene, Greg causes everyone in a roller rink to suffer unfortunate events. Moments later, you see that he and Isabel are being arrested at the same rink seemingly for the mayhem they caused.

With such a great set-up should come a great payoff, but “Bliss” doesn’t deliver on that promise. Mystery requires a conclusion for the audience to decide if the journey from A to B was satisfactory. Like a dollar on a string, the film pulls you along with what may or may not be. Elements of the story involving Greg’s work and his family become red herrings that eat up runtime and are never fully explained.

There is not-so-subtle social commentary on climate change, universal income and anarcho-communism that is left hanging on the vine due to Cahill’s inability to thread together the plot points he introduces. Greg is at one point teased to be the sane one in this twisted love story, leading us to believe the crazy experiences are actually those of Isabel. But when “Bliss” enters its second act, the narrative of the movie is completely lost, and by act three, we enter the land of movie bad boy Tommy Wiseau (“The Room”)

Wilson is the best part of “Bliss” by virtue of being the only person who is committed to his character, but Hayek is the glue that keeps the narrative together. With that said, this is one of the worst performances of her career. Nothing about her character seems, for lack of a better term, real. Her character is supposed to be a highly intelligent researcher, but she acts like a homeless prostitute in the “simulation.” A character with two radically different personalities is jarring when both are supposed to exist on the same plane. Hayek is also responsible for the biggest cringe-inducing lines, especially when she drops an f-bomb in a scene that doesn’t call for it.

“Bliss” is a film that holds the hand of its audience down the rabbit hole and then lets go as the hole leads to a bottomless pit.

The Takeaway: A film that succeeded in its pitch meeting and then fell apart at the seams, “Bliss” goes from intriguing sci-fi to so bad you wish the last 103 minutes of your reality was as big of a joke.

See or Skip: If you are going to take time out of your day to watch “Bliss,” watch the first 25 minutes and then walk away.

«Previous Post
Aubrey Plaza And Jason Statham Pair Up For Spy Comedy»Next Post
Enter Pay-Per-View, In One Of The World’s Largest Film Industries