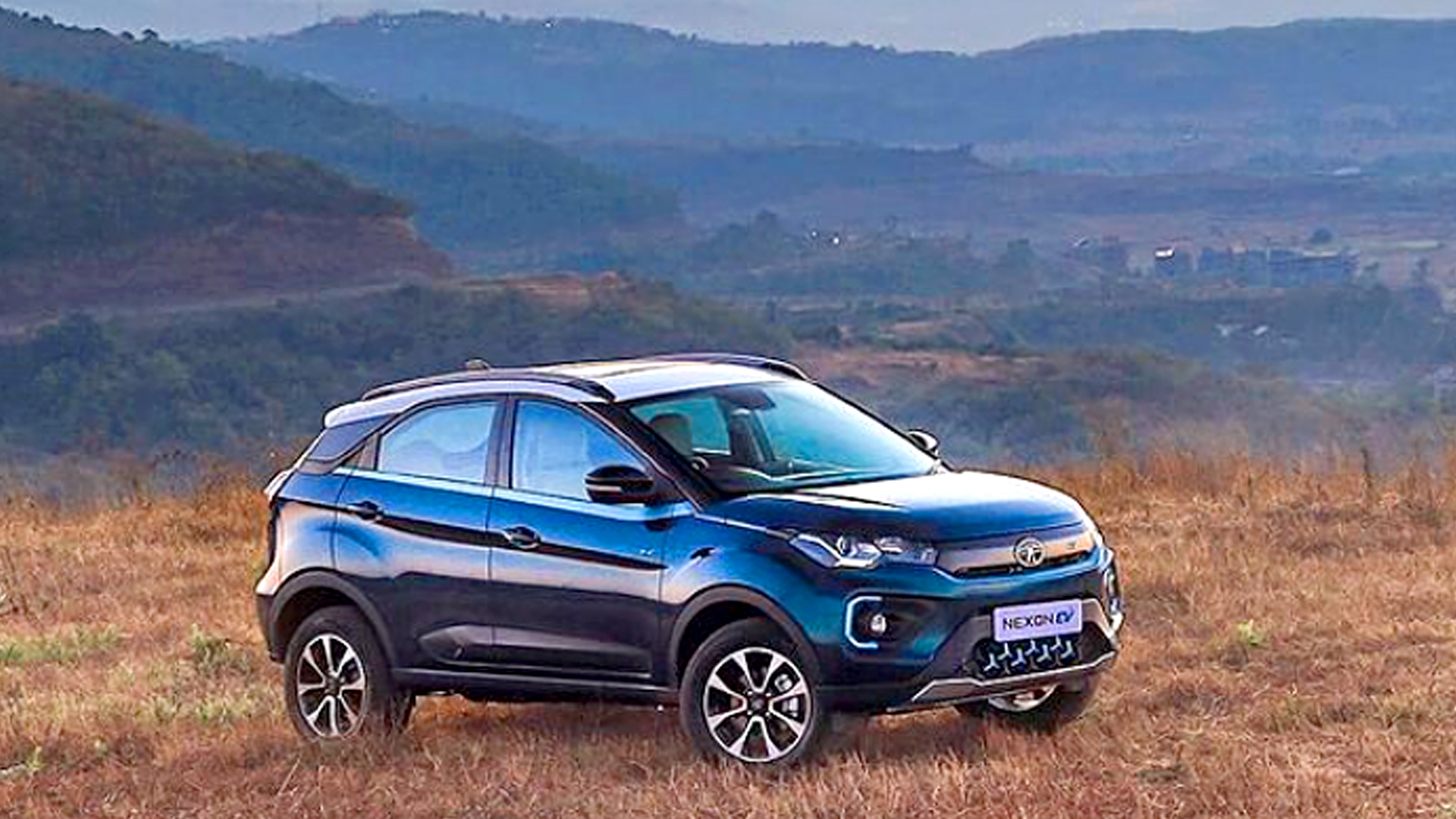 Tata Motors celebrated the first anniversary of the launch of the Nexon EV in India on Jan. 28. (tatamotorsgroup/Instagram)

A government official from Najafgarh, a town in southwest Delhi, decided to buy an electric vehicle (EV) last year to do his bit for the environment. After reading rave reviews about the zero-emission Nexon XZ+, he decided to purchase the car.

The Nexon EV is sold in India by Tata Motors, the owners of Jaguar Land Rover that wishes to turn into an all-electric luxury brand from 2025.

Excited with the purchase, his family decided to go on a trip in early January but got a rude shock as the car stalled in the middle of the road at around 10:00 am, narrowly averting an accident.

“It was Jan. 9. My son was driving the car,” Rajesh Kumar told Zenger News.

“The car failed to deliver the specified range of 312 kilometers [194 miles] on a single charge as promised by the company and stalled in the middle of Delhi’s Uttam Nagar, about 10-12 kilometers [6-7.5 miles] away from my home. A towing truck came after one and a half hours and till then my family was stuck in the car. I got so irritated that I had to file a complaint,” said Kumar. 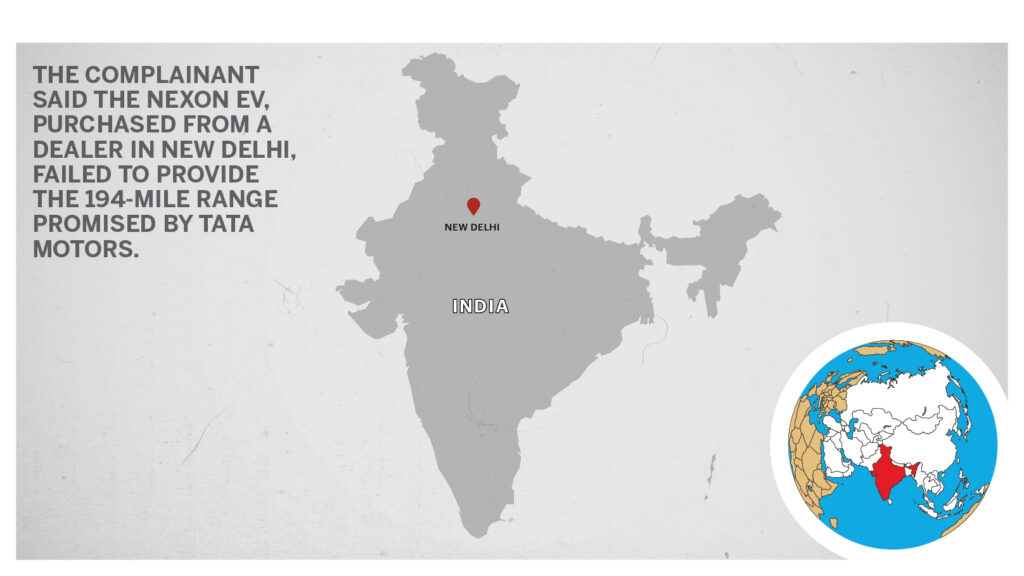 Kumar first filed a complaint through an e-mail to Tata Motors and the dealership from where he purchased the car. On not getting a response, he escalated the matter to the Delhi government’s transport department.

“I was not satisfied with its performance since the day I bought it, and after several such circumstances and complaints with the Safdarjung Enclave dealership in Delhi from where I bought the car, I filed the complaint,” he said.

“After several updates of the software, the car still failed to reach the promised range. The car is in the service center and I don’t want it back,” he said. “I requested a refund.”

His complaint after the Jan. 9 incident made the Delhi government’s transport department send a show-cause notice to Tata Motors.

“It has been informed that while the vehicle model is specified to provide a 312-kilometer range on a single charge, the vehicle owned by the said customer has never provided a range of more than 200 kilometers [124 miles],” the show-cause notice states.

The department asked the firm’s representatives to appear before the deputy commissioner of transport on Feb. 15.

A Tata Motors spokesperson said that they were aware of the “notice” and were taking “possible measures” to address the concerns. But, despite several attempts, the spokesperson refused to talk about the meeting that was to take place on Feb. 15.

“The range at single full charge [312 kilometers] for the Nexon EV is basis the certification received from the Automotive Research Association of India, which is the official body that independently tests all mass-produced vehicles under standard/defined conditions before they can be offered to customers,” the spokesperson said.

“In winters, since it has lithium batteries, the performance is usually low. But I have never got anything less than 200 kilometers. I have traveled to Dehradun from Delhi in this, and from there, I went to Mussoorie.”

The distance between Delhi and Dehradun, capital of Uttarakhand state, is about 250 kilometers (155 miles), and from Dehradun to Mussoorie is another 35 kilometers (22 miles).

Tata Motors was hit with the show-cause notice weeks after it celebrated the first anniversary of the launch of the Nexon EV in India on Jan. 28. The car’s one-year journey can be safely considered as one of the success stories of Covid-battered 2020.

Covid-19 and the resultant lockdown had slammed the brakes on the evolving EV ecosystem in the country. But the Nexon EV defied market trends with strong sales.

India’s auto industry saw sales of 2,959 EVs from April to November 2020. This is without the EV fleet segment, which reported an 80-85 percent decline as it was underutilized. So, almost the entire growth (2,800 of 2,959 units) was driven by the personal EV segment.

Now, of the 2,959 units, the Nexon EV accounted for 2,086 units during the period. The Tata Motors spokesperson said since its launch, nearly 3,000 Nexon EVs have been sold.

“The company has partnered with relevant Tata group companies to introduce ‘Tata uniEVerse’, an enabling ecosystem to catalyze the adoption of EVs in India with thrust on local manufacturing of key components and development of supporting infrastructure,” a Tata Motors spokesperson told Zenger News.

Tata Motors decided to enter the personal EV segment when all pointers were directing towards fleet for growth. But this was well-thought-out. Tata Motors relied on a consumer survey to make its EVs attractive.

The survey said EVs should not be priced 20-25 percent more than comparative conventional cars. It said buyers won’t show interest if the range was less than 200 kilometers.

So, Tata Motors tailor-made an EV that promised a 312-kilometer range and was just around INR 150,000 ($2,059) pricier than the Nexon diesel automatic transmission variant.

In Delhi, the Nexon EV is cheaper than the diesel automatic transmission model due to a Delhi government purchase incentive of INR 10,000 ($137) per kWh of battery capacity for buying an electric four-wheeler with a cap of INR 150,000 ($2,059) per vehicle.

But now, due to one Nexon EV complaint, the Delhi government’s transport department has threatened to take action “including delisting of that particular vehicle from the list of subsidy-eligible EVs” if Tata Motors representatives do not appear before it.