Action was carried out by agents of the Spanish National Police during four raids.
By Juan Fernandez February 17, 2021
Facebook
Twitter
Linkedin
Email 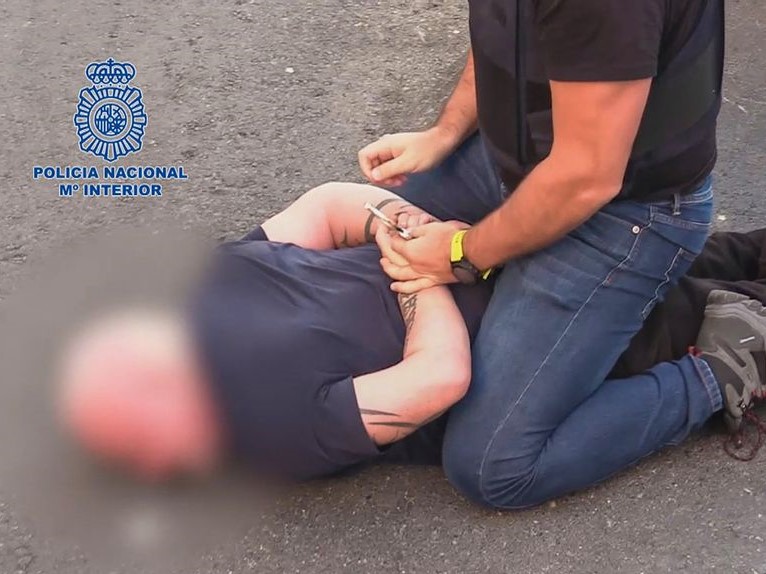 The police operation that ended with the arrest of four people in charge of sending drug to UK. (Newsflash)

A bodycam video of the raid has been released where agents can be seen removing a man from his vehicle and placing him in custody before raiding other homes and arresting the other suspects.

“Four people were arrested for their roles in a criminal group that specializes in producing cannabis and narcotics and further peddling them to the United Kingdom,” the official report by the Ministry of the Interior said.

As per a statement released by the police, the cops had arrested an Irishman in connection with a murder of a journalist in Dublin, Ireland.  The suspect was labeled wanted before the arrest. It has been alleged that all four arrests were part of the criminal John Gilligan gang.

The authorities searched the homes, some of which had swimming pools and appear quite luxurious.

Investigators believe one of the suspects was in charge of cultivating and growing the cannabis plants which he did in his residence. The other suspects was tasked with communicating with the UK, and the remaining two are suspected of posting the drugs.

The group was believed to be run by an Irishman, who was not named in the report, linked to the murder of a journalist in Dublin in 1996. The suspected ring leader was arrested in another operation by the National Police on October 23, 2020.

During the arrest, agents found a Colt Python handgun that matched the description of the weapon used to murder the journalist.

The Colt Python is a .357 Magnum caliber revolver manufactured by Colt’s Manufacturing Company of Hartford, Connecticut.

As per a report released following the suspected leader’s arrest, Irish authorities “link his organization with the murder of a journalist which occurred in 1996 in the outskirts of Dublin where she was gunned down by two individuals who followed her on a motorcycle.”

The unnamed investigative journalist was killed in 1996 when a motorcyclist, who was chasing her, shot her six times before speeding away. The killing was described as “an attack on democracy” by Taoiseach John Bruton who attended her funeral as it was broadcast live.

John Bruton was the Taoiseach or the Prime Minister of Ireland from 1994 to 1997.

Drug kingpin John Gilligan was later jailed for killing and resulted in the formation of the Criminal Assets Bureau to tackle organized crime and has assisted in the arrests of countless criminal gang members since then.

In 2001, Gilligan was sentenced to 28 years in prison for the trafficking of commercial quantities of cannabis resin. On appeal, this sentence was reduced to 20 years, and in October 2013, he was released after serving 17 years.

It is unclear when the suspects are expected to stand trial for their alleged drug-trafficking.