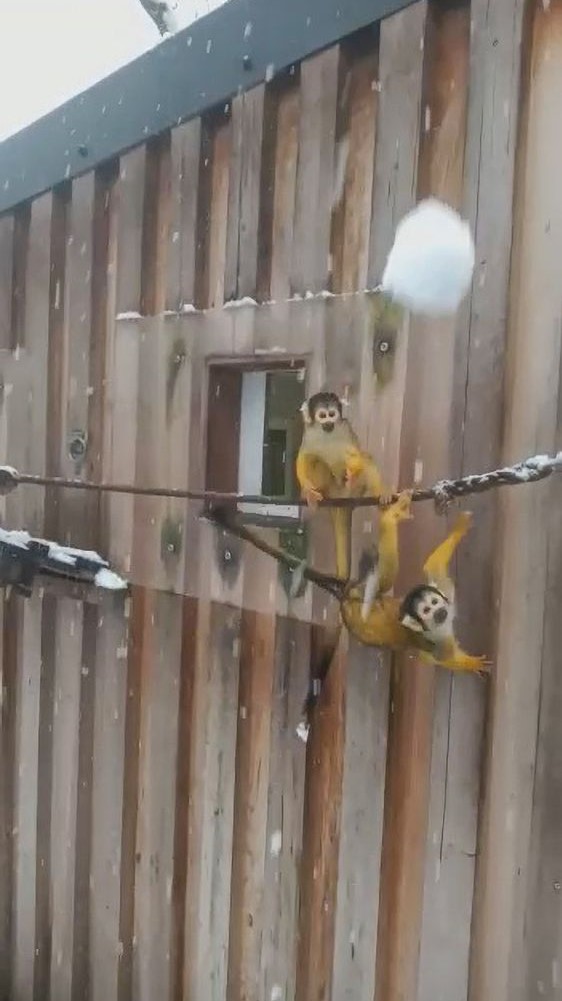 LONDON — Nothing’s better than a snowball play date on a cold day, especially if it involves monkeys.

“It was another snow day, and our squirrel monkeys played a fun game catching snowballs thrown by their keepers,” ZSL London Zoo posted along with video on its Facebook page on Feb. 8.

Two of the monkeys, Agnes and Pip, born last year, were experiencing snow for the first when they were filmed.

The zoo currently has 19 Bolivian black-capped or Bolivian squirrel monkeys, which live in large groups and have a number of vocal calls.

The monkeys’ diet has an important role in the ecosystem, the conservancy states. By consuming fruit, the monkeys act as agents for seed dispersal throughout the forest. They also eat insects, keeping that population under control.

The fur of the squirrel monkey is short and close, with olive coloring at the shoulders and yellowish-orange on its back and extremities. Their throat and ears are white and their mouths are black. German’s call them “skull monkeys” because of their black and white faces.

Squirrel monkeys grow to as much as a foot tall, with a tail of about the same length, and they weigh around two pounds.

“Remarkably, the brain mass to body mass ratio for squirrel monkeys is 1:17, which gives them the largest brain, proportionately, of all the primates,” the London Zoo states on its website.

Squirrel monkeys can be found in the rainforests of the upper Amazon in Peru, Brazil and Bolivia, where they spend most of their time in the canopy, and periodically scavenge on the forest floor.

“The squirrel monkey’s status in the wild is threatened from use in biomedical research and as pets, bait and food,” the zoo states on its website.

“Currently ZSL London Zoo, along with other zoos in England, is involved in breeding programs aimed at increasing numbers of this primate species. Our squirrel monkeys are part of the European Endangered Species Programme.”