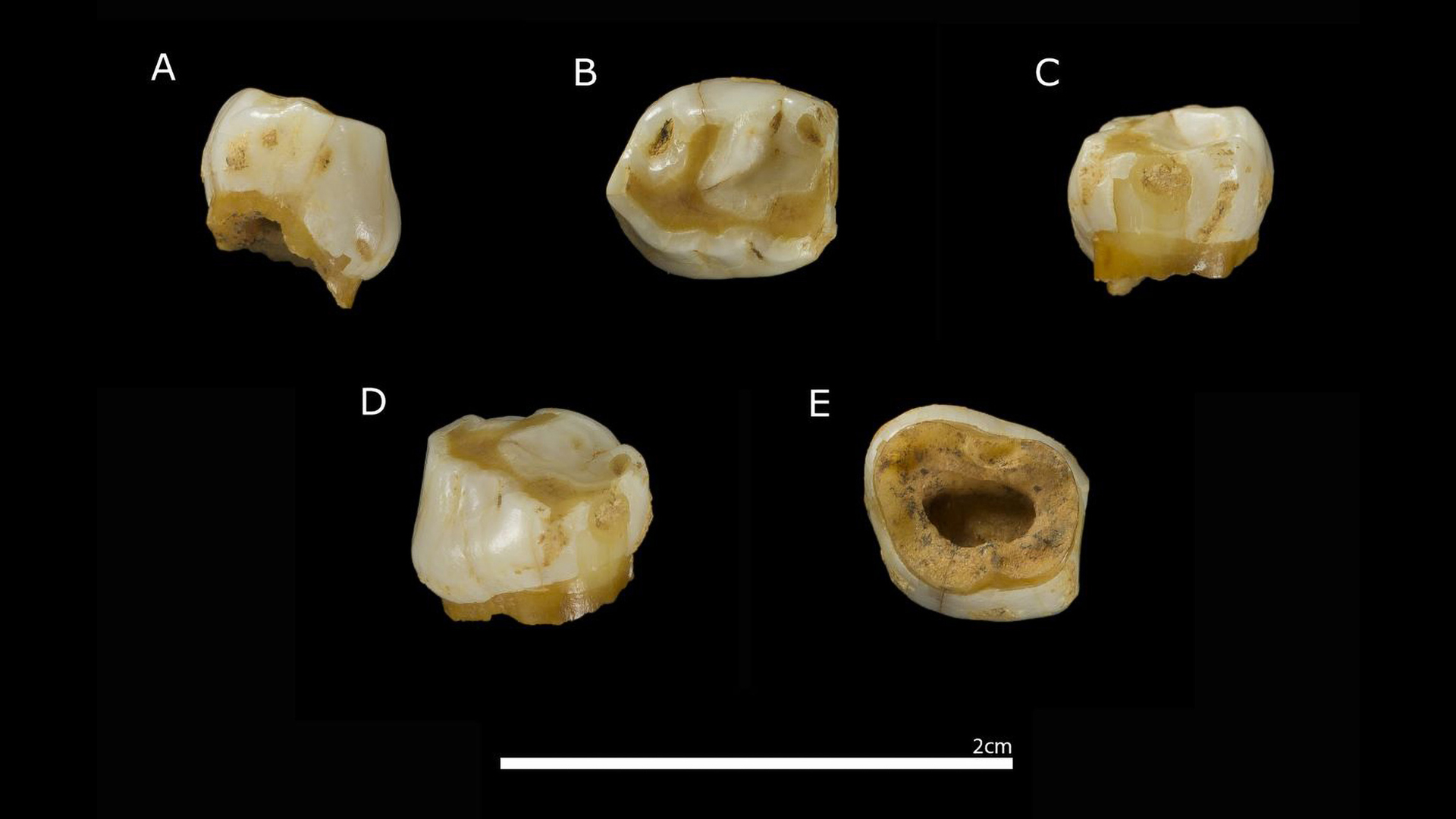 Different angles of the tooth of Vera. (IPHES/Real Press)

CORNEJO, Spain — Researchers have uncovered secrets about a rare milk tooth that belonged to a Neanderthal child who lived on the Iberian Peninsula 45,000 years ago.

The milk tooth was found at an important Neanderthal archeological site in the cave of Prado Vargas located in the town of Cornejo in the north-central Spanish province of Burgos.

“I told her, it is a molar from a child,” said Dr. Marina Lozano, 44, researcher of the Catalan Institute of Human Paleoecology and Social Evolution and associate professor of Sapin’s Rovira i Virgili University.

Lozano’s team has been working at the site for about four years.

Animal remains were found along with the tooth, which was discovered two years ago and now scientists have revealed their findings.

The researchers finished digging the fourth level, where fauna remains were found along with lithic tools dating back 45,000 years.

During the dig, researchers found a small milk tooth. The lead researcher in charge of the dig sent a photograph of it to Lozano asking her to identify it.

Lozano was then asked to conduct research on the tooth, an extremely rare find as there are not a lot of remains from Neanderthals left in the world.

She explained: “It was mixed up with a lot of animal remains, which were waste from the daily lives of the Neanderthals, such as deer and horses, used by them for food or to produce leather. They also used the bone marrow in their diet and also as a combustible for fire.”

The expert said: “It is the milk tooth lost by a child as happens with all children, so the child lost it and kept living”, adding that “it is only an anecdotic moment, we know that there was a group of Neanderthals and that the tooth fell out.”

“We know that it was a milk tooth because commonly, only the crown of the tooth falls out, we can see the root was absorbed, which is common in milk teeth,” Lozano said.

It is believed this tooth belonged to an 8-year-old because, according to Lozano, “Neanderthals had an advanced growth process and therefore it is believed that the tooth fell out when the child was 8 rather than 10,” said Dr. Lozano.

Due to the importance of this discovery, researchers decided to name the child whose tooth it was, and they used the female name Vera as a tribute to the granddaughter of the owner of where the site is located, as he has always helped them out with the dig.

This tooth still has many secrets to reveal, and further research is being conducted.

Furthermore, analyzing the inside of the tooth could help establish common traits between Neanderthals and Homo sapiens, according to Dr. Lozano.

Neanderthal life is still full of mystery as there are not a lot of remains left in the world. At the Atapuerca site, one of the most important archeological sites in Spain, only a phalange (foot or finger bone) has been found, so discoveries of Neanderthal remains are extremely rare.

However, it is believed that Neanderthals lived in groups of between 10 and 20 individuals and used caves for shelter.

“They hunted animals, such as horses, and they carried the dead animals to the cave to dismember them and to use their skin for leather. The bones were mashed in order to eat the bone marrow, which is very nutritious, and it can also be used to start a fire,” said Lozano.