Court declines prosecutor's request for life imprisonment of victim, but an investigation is under way into his claims of abuse.
By Farid Sait February 16, 2021
Facebook
Twitter
Linkedin
Email 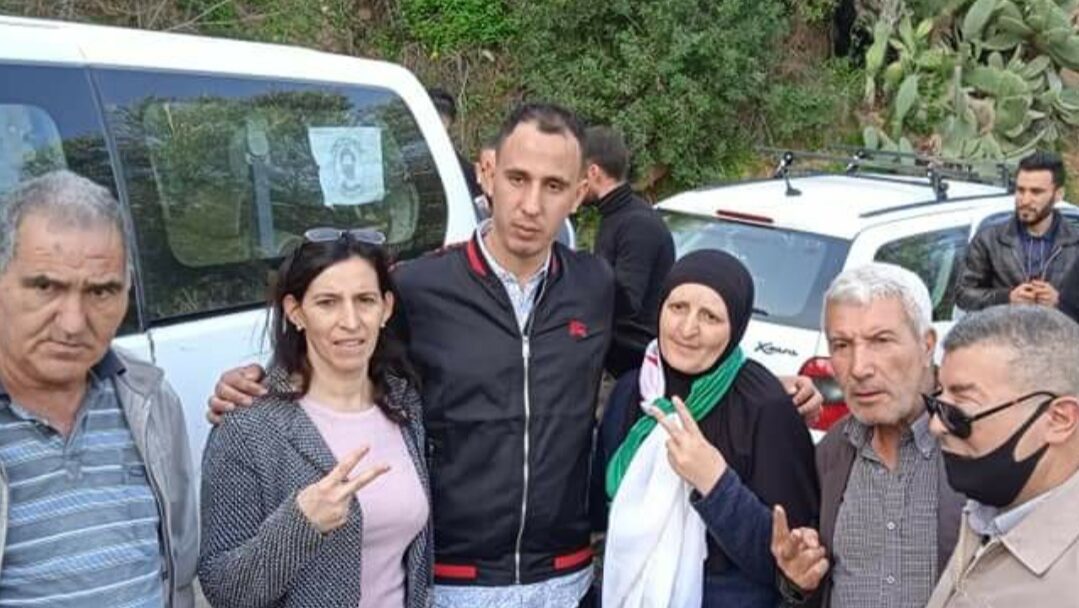 Walid Nekkiche poses with supporters after his release. (Anis Baghdadi)

ALGIERS, Algeria — Algerians are demanding justice for a student who says he was raped and tortured by security forces after participating in a pro-democracy demonstration.

Widespread condemnation by human rights activists and political activists moved Algeria’s General Prosecutor’s Office to open an investigation into alleged abuses suffered by the student, Walid Nekkiche, during his 14 months in prison in pre-trial detention.

“I’ve been through hell,” 25-year-old Walid Nekkiche said, following his release from prison on Feb. 2. “Especially the six days spent at the Ben Aknoun barracks.”

Nekkiche was arrested on Nov. 26, 2019, in Algiers for taking part in a weekly march of students of the “Hirak,” a popular anti-government movement demanding radical change and ouster of elites in Algeria. It was launched in February 2019 and only months later helped to oust President Abdelaziz Bouteflika, who had been in power for 20 years.

Originally from the city of Tizi Ouzou in the northern Kabylia region, Nekkiche was arrested during a march and accused of belonging to the Movement for the Autonomy of Kabylia. Kabylia is a vast region extending across the north-central part of the country inhabited by native Berbers. The movement calls for self-determination for the region’s population.

During his Feb. 1 trial, Neikkiche faced charges including “conspiracy against the State,” an “attack on the integrity of the national territory” and “incitement of the population to take up arms,” with prosecutors asking the judge to sentence him to life imprisonment.

However, during his testimony, Nekkiche said on the evening of his arrest in November 2019, he was taken by the police to the “Antar” intelligence center in Algiers.

For six days, Nekkiche said, he was “sexually, physically and verbally assaulted by the security services during interrogation … every day from 6 a.m. to 1 p.m.” At least eleven agents took part in the assaults, he said, and used implements such as broomsticks.

“I endured a lot during these 14 months of prison,” the student said.

Ultimately, the court in Algiers on Feb. 8 sentenced him instead to six months in prison for “distribution and possession of leaflets to undermine the interest of the country,” and he was released due to time already spent in pre-trial detention since his arrest.

More than 20 lawyers have rallied behind Nekkiche, with his testimony causing outrage.

Nabila Smail, one of the lawyers, said she first unsuccessfully filed a complaint with the Algerian courts on Aug. 20 last year, calling for an investigation into the allegations of sexual violence and torture against the student while he was still in prison.

“My request was never considered,” she said.

Other human rights groups have lent their voice to the call for the perpetrators within Algeria’s security forces to be brought to justice. “We called for an independent investigation and the opening of a judicial investigation to identify those responsible,” said Said Salhi, vice-president of the Algerian League for the Defense of Human Rights.

In a joint statement to the press, two groups, the National Committee for the Release of Detainees and the National Coordination of Algerian Academics for Change, denounced “torture” and a “normalization of violence that is reaching alarming proportions.”

The investigation recommended by the General Prosecutor’s Office has since been transferred to the Blida Military Court.