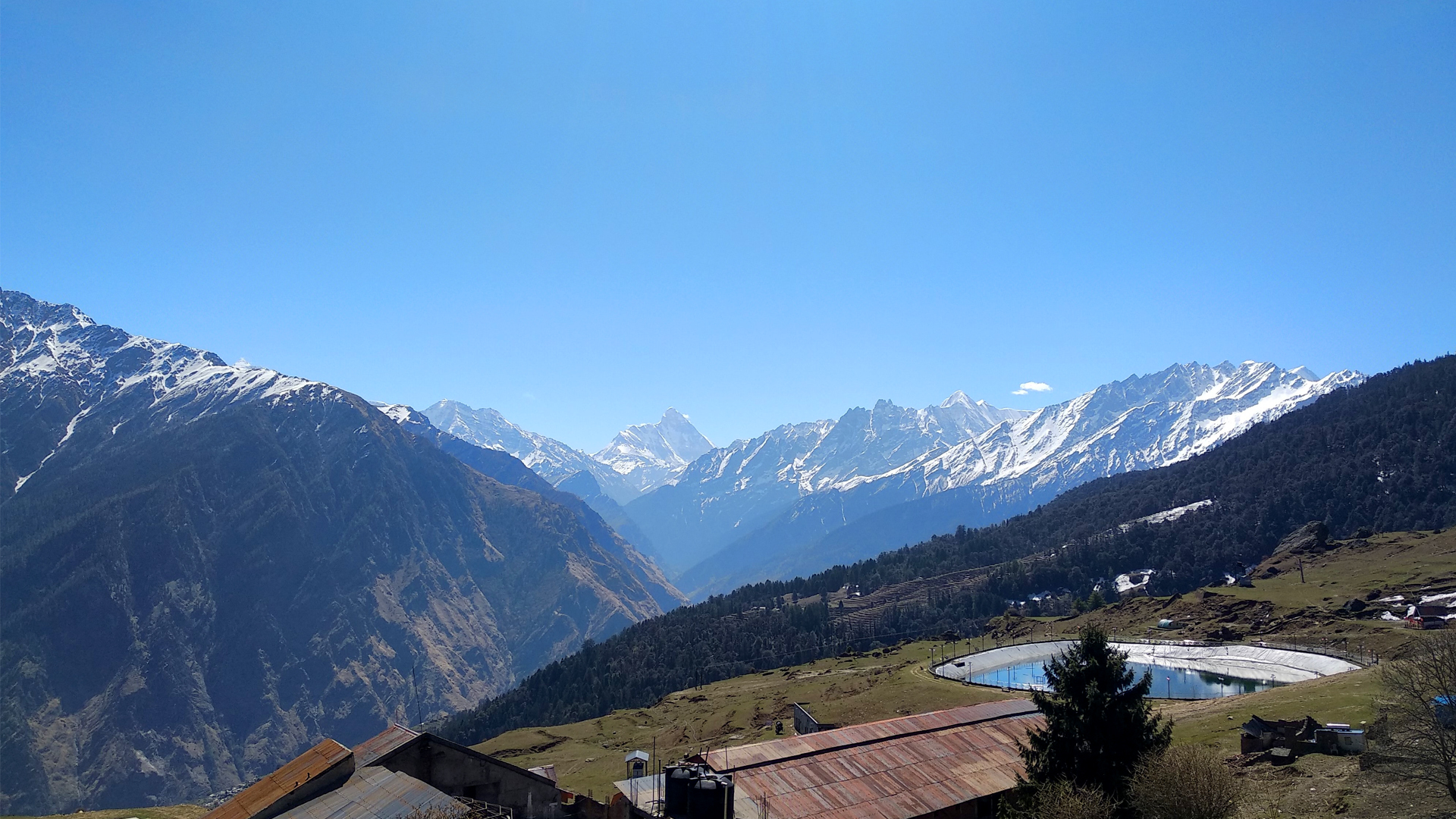 NEW DELHI — Nearly half a century ago, women of the Raini village in north India had hugged trees as part of a protest. Their aim: to prevent the government from cutting down 2,000 trees earmarked for development projects.

They were led by Gaura Devi and the protests were part of the Chipko Andolan — a non-violent movement from the 1970s in which protestors hugged or stuck to trees to save them from loggers. The movement began in the Himalayan region of the state of Uttar Pradesh, which would become the state of Uttarakhand in 2000.

The protestors had then managed to get a 10-year ban on commercial logging in the area. In the past three decades, however, Uttarakhand has steadily become the center of hydropower projects, leading to massive deforestation and ecological degradation.

Just how fragile the ecology of the place is can be gauged from the after-effects of the Feb. 7 flash floods that left a trail of death and destruction.

“What our ancestors saved during the Chipko movement for us, was felled to make way for the Rishi Ganga project,” Sangram Singh, the 42-year-old head of Raini, told Zenger News. “We are ashamed we couldn’t do enough.” 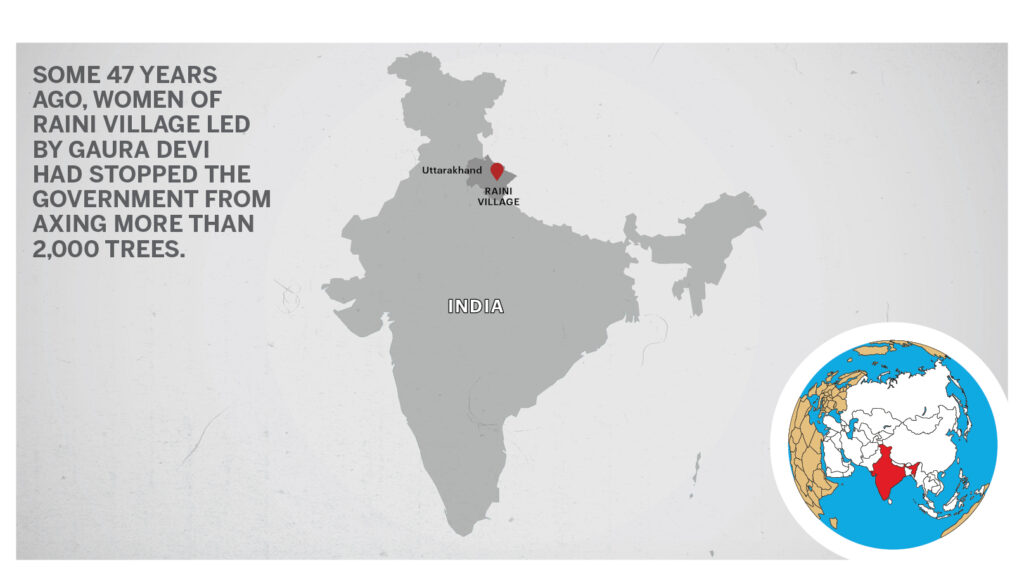 The rescue efforts have not yet provided succor to the villagers.

“We are still spending nights under the open sky in the forest at a higher elevation,” said Singh. Raini (also called Reni) is about 2,000 meters above sea level and not connected to a road. The lone bridge that connected it to the world was washed away by the deluge.

The villagers are also fearful about an artificial lake — almost the length of three football fields and 60 meters deep — that has formed nearby after debris from the glacier burst blocked a stream that joins the Rishi Ganga river.

The Indian government had got enough warnings from protesting villagers and scientists.

Though cloudbursts and flash floods in the region aren’t surprising, a June 2019 study states that the melting of Himalayan glaciers caused by rising temperatures has “accelerated dramatically since the beginning of the 21st century”.

“The analysis, spanning 40 years of satellite observations across India, China, Nepal, and Bhutan, indicates that glaciers have been losing the equivalent of more than a vertical foot and half of ice each year since 2000 — double the amount of melting that took place from 1975 to 2000,” it states.

Another paper, from the New Delhi-based Centre for Science and Environment states published in 2014, states: “The Ganga, in its upper reaches [in the state of Uttarakhand], has become an engineer’s playground.”

These projects, many at short distances from each other, leave little space for rivers to regenerate and revive, experts said.

“Public access to government-maintained water and climate data in the three major co-riparian countries of the Ganga basin — Nepal, India, and Bangladesh — has been either inadequately granted or formally restricted,” a paper from The Asia Foundation, New Delhi, states.

But Subimal Ghosh, a professor at Department of Civil Engineering, Indian Institute of Technology-Bombay, citing a July 2020 study that he co-authored, said: “Frequency of extreme flow events [in western Himalayan rivers] during 1980-2003 has doubled.”

“Our results highlight the severity of hydro climatic changes underway in the WH [western Himalayan] region and the critical need for a hydro-infrastructure for flood forecasting to benefit more than 17 million inhabitants and for ecosystem services to mitigate increasing flood hazards,” the study states.

After the June 2013 disaster, the Supreme Court of India asked the environment ministry and Uttarakhand government “not to grant any further environmental or forest clearance for any hydroelectric power project in Uttarakhand, until further orders”.

An expert body was set up in October 2013 on the court’s direction. One of the tasks was to find out if 24 hydroelectric projects were impacting the biodiversity of Alaknanda and Bhagirathi river basins, as observed by the Wildlife Institute of India, Dehradun.

After the expert body said 23 out of 24 hydroelectric projects would have a significant and irreversible impact, the court stayed all the projects.

“But the environment ministry wanted six of the 24 major projects to be taken forward,” said Vimal Bhai, president of Matu Jan Sangathan, a people’s movement against dams in Uttarakhand.

Both the projects hit by the Feb. 7 floods, which fall in the Alaknanda river basin, find mention in the report by the export body.

A March 2018 study by Divecha Centre for Climate Change, Indian Institute of Science, Bangalore, states that the average temperature in the northwestern Himalayas rose by 0.65 degrees Celsius over 25 years since 1991 — higher than the global average of 0.44 degrees Celsius.

“It is a fact that the Himalayas are getting warmer year-on-year due to human activities,” Maharaj K. Pandit, a professor in the Department of Environmental Studies, University of Delhi, told Zenger News.

Singh said the Rishi Ganga project had “changed the river’s course, which flows north-west to north-south, by putting stones and boulders on the river bed.”

“It is a common practice for hydel power projects to dump muck in the river and cause extensive damage downstream,” said Anil Prakash Joshi, founder of Himalayan Environmental Studies and Conservation Organization, a Dehradun-based non-profit.

“The Rishi Ganga and Tapovan Vishnugad projects are located inside and at the edge of [world heritage site] Nanda Devi Biosphere Reserve, respectively,” said Vimal Bhai.

“Bursting of one cracker is not allowed in eco-sensitive zones, these companies are using indiscriminate explosives for clearing hillsides and making tunnels,” he said.

“Vibration from use of explosives may have contributed to the landslide,” said Bharat Jhunjhunwala, a noted environmentalist who has done extensive studies on Uttarakhand rivers.

To stop what took place on Feb. 7 from happening, Kundan Singh, a villager from Raini, had filed a public interest litigation in March 2019 at Uttarakhand High Court against the Rishi Ganga project over violation of environmental rules.

The court issued a stay order on any mining and blasting activities in and around the village.

“But I am not aware how much of this order was implemented,” Abhijay Negi, one of the advocates for the petitioner, told Zenger News.