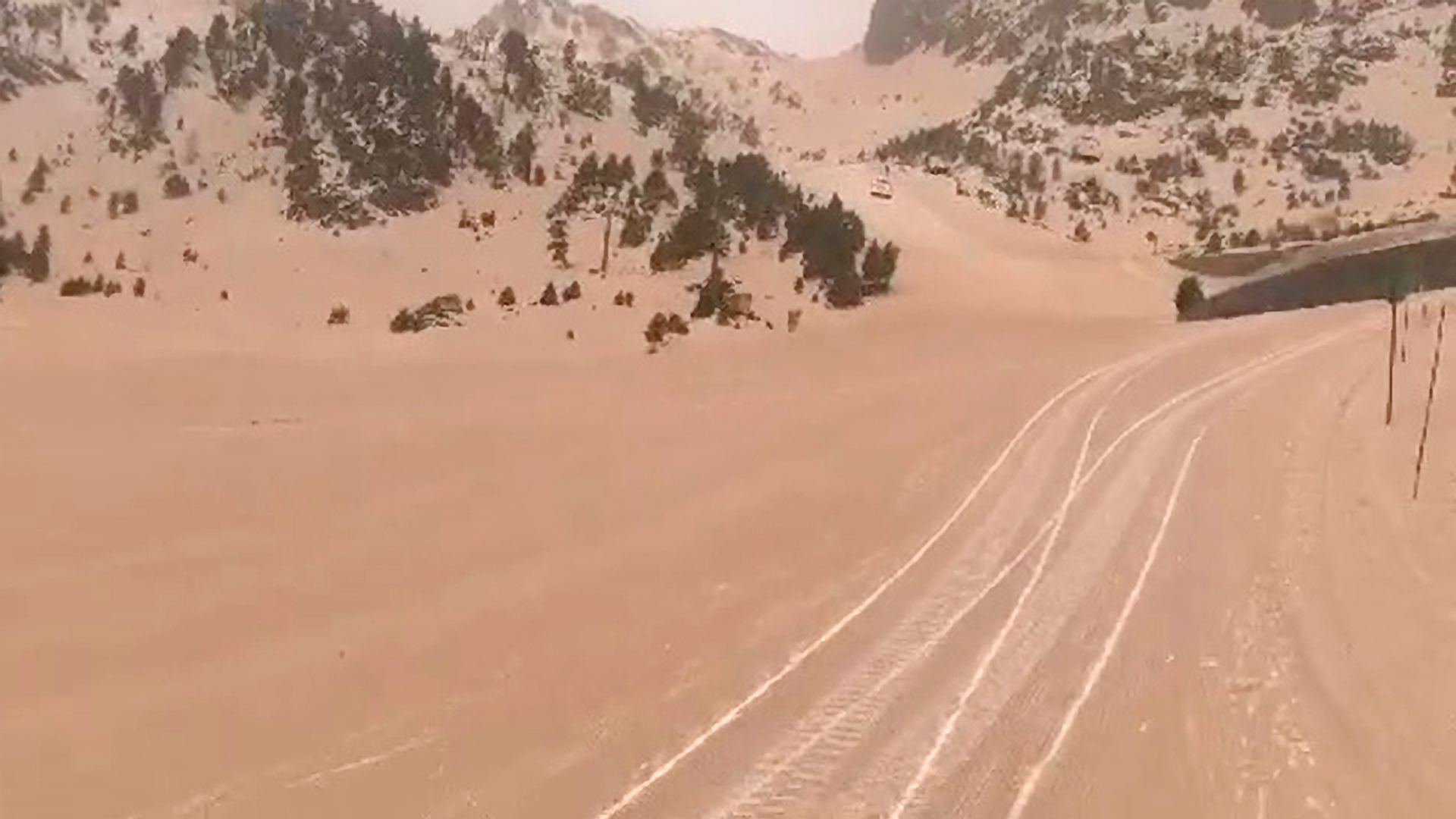 The dust on the slopes due to the blood rain. (Montpackers/Newsflash)

PYRENEES, France – The Pyrenees mountain range, stretching across south-western France and north-eastern Spain, has been covered with dust due to a meteorological event, known as ‘blood rain’.

It appeared like a Martian landscape as the event took place and was filmed on Feb. 6. The Pyrenees mountain range witnesses snows throughout the year.

“We had not seen this incident in the last 30 years. At least not with this intensity,” said The Spanish State Meteorological Agency.

The video footage shows how people are amazed to see the entire mountains covered with reddish dust.

In some other videos, people are brushing off the snow in order to show the color of the snow underneath.

The incident is termed as ‘blood rain’, with dust particles coming from the Sahara Desert and accumulating over the mountains.

Blood rain happens when high amount of red dust or particles get mixed into rain, which lends the rain its reddish appearance, states www.metoffice.gov.uk.

Blood rain is not a scientific term. It is a colloquial phrase that has been used for ages.

Blood rain happens when the rain carries dust or sand from deserts. When the rain falls on the earth, it looks reddish. It thereafter leaves a thin layer of dust on the periphery which can also be red, hence the name. The sand particles are absorbed by raindrops which are scattered over large areas during rainfall.

For blood rain to occur, it is necessary that the rains be very weak, so that the water evaporates and the solid residue of the Sahara dust remains deposited.

It is not only capable of coating snow-laden mountains but also objects like cars, houses, and garden furniture.

The phenomenon also took place in the French and Swiss Alps, where people were stunned to see the Mars-like landscape all across.

Strong winds hailed from the south, along with rainfall, on Feb 5 and Feb 6. It covered a large area in Southern Spain, including the cities of Catalonia, the Balearic Islands, Aragoan, and Valencia. Moreover, southern France and much of Switzerland were dust-covered.

“In contrast to the rather consistent seasonal distribution of red-rain events in the Iberian Peninsula region, Central Europe tends toward a bimodal seasonal distribution, with the majority of its events occurring in spring and autumn,” said Joshua R. White in Seasonality in European Red Dust/ Blood Rain Events.

The strongest link between blood rain and a meteor strike occurred in Egypt, which dates back to 30 BC. It was mentioned by ancient Roman historian Cassius Dio.

“Not only did it rain in places where no raindrop had ever been seen before, but blood beside and the flash of weapons appeared from the clouds, as the showers of blood mingled with water poured down,” he wrote.

The Southern Indian state of Kerala also witnessed blood rain in 2001. It was in the middle of the monsoon season when the rain started to fall at regular intervals for some days. The color of the rain was strong enough to stain the clothes.