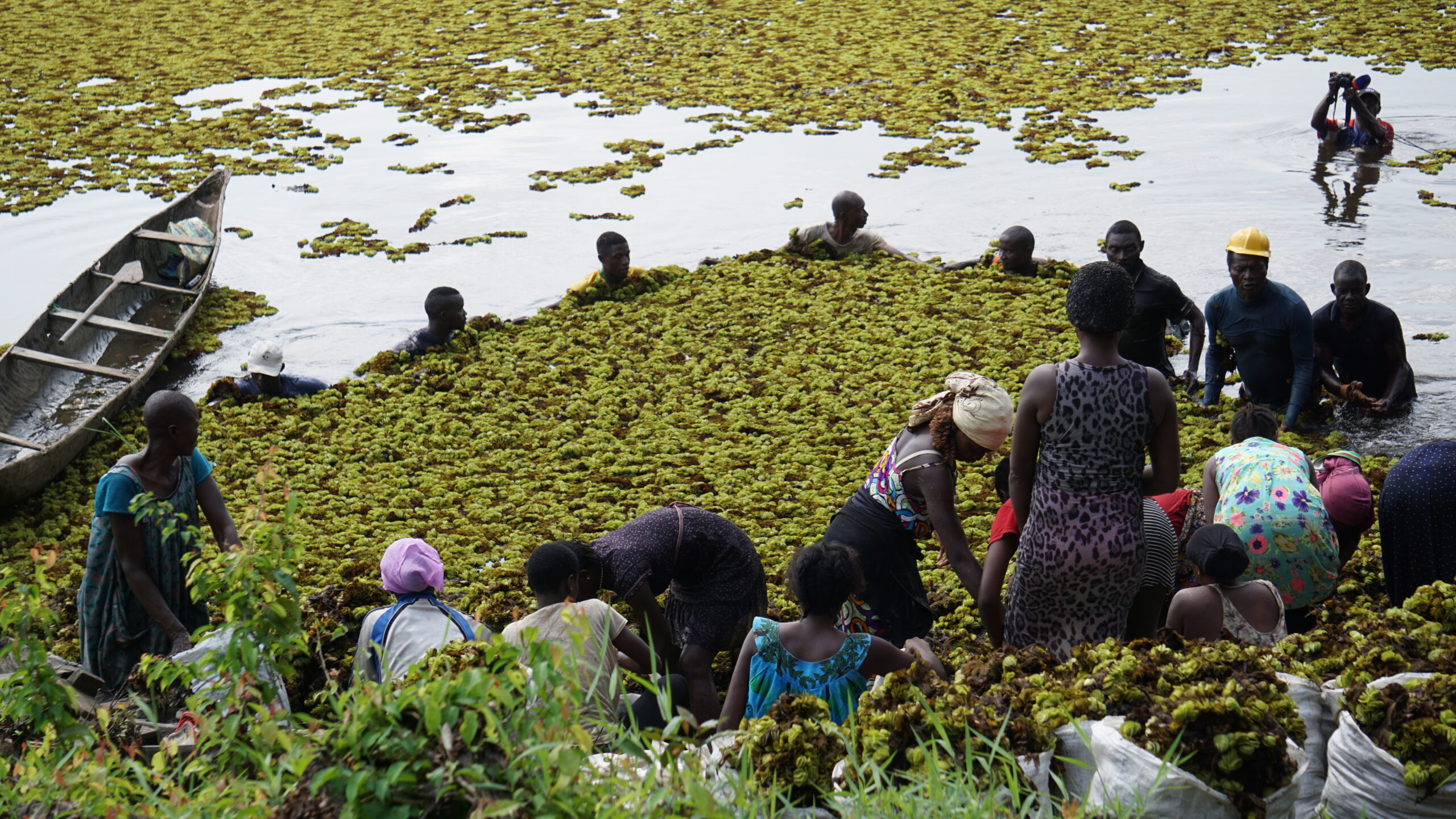 Members of a fishing community in Cameroon's coastal region engage in frantic manual removal of Salvinia molesta in Lake Ossa in December 2019. (Photo courtesy of AMMCO)

YAOUNDE, Cameroon- — A fishing community in Cameroon is racing against time to save Lake Ossa, one of the country’s largest, from a floating fern that thrives in slow-moving, nutrient-rich warm freshwater.

The invasive plant — Salvinia molesta— has already covered 40 percent of the lake’s 9,884-acre (4,000-hectare) surface, according to the African Marine Mammal Conservation Organization in Cameroon. The plant is degrading the habitat of rare, protected wildlife, including the African manatee, which is listed as “vulnerable” on the Red List of the International Union for Conservation of Nature.

“The invasive plant doubles in size every 10 days. It is an existential threat not only to the African manatee, but also to the local community and the area’s biodiversity,” said Aristide Takoukam Kamla, a marine mammal biologist and founder of the African Marine Mammal Conservation Organization.

“Salvinia molesta has negatively impacted the activity of local fishermen in the sense that, not only are they unable to cast their fishing nets in areas obstructed by Salvinia, but also the carpet formed by the plant at surface prevents the light from penetrating the water column, and therefore reduces photosynthesis of phytoplankton on which most fish species feed on. That results in a drastic depletion of fish production and a drastic decrease in their daily income,” Kamla said.

Lake Ossa is also an important habitat for freshwater turtles, crocodiles, monitor lizards, snakes, aquatic birds and over 18 families of fish, according to the Global Nature Fund.

The organization estimates about 400 fishermen are fishing in the lake. Fish are the main protein source for the several thousand people who live around it. Since the invasive Salvinia molesta started appearing in the lake in 2016, fishermen have noticed a dramatic generational decrease in fish stocks.

“Fishing has been my main source of income for more than 30 years now,” said 56-year-old Kouoh Elinga Charles Willy, leader of fishermen in Lake Ossa. “The Salvinia plant has disrupted fishing considerably. Initially, I was able to save $18.42 from fishing daily. But today it is pretty difficult to fetch $1.84 from the activity, which can hardly satisfy our basic needs.”

The father of eight said he has resorted to doing other odd jobs to make up for the dwindling amount of money he can make in fishing.

Another fisherman, Raymond Moukala, described the situation as “serious,’’ since fishermen “are no longer able to cast their fishing nets in the lake” because of the invasive plant.

Kamla said his organization is reviewing three possibilities for removing Salvinia molesta from the lake: mechanical removal, chemical control and biological control. The first, which involves mobilizing villagers to remove the invasive plant with their bare hands, is the only option being implemented  now.

“This method is very demanding, especially given that the plant multiplies very quickly. We tried that in Lake Ossa, but it didn’t work. We removed over 200 tons of Salvinia in 2019 and 2020. No impact was felt,” Kamla said.

He ruled out employing chemical control, which entails spraying a herbicide on the lake.  The method “can be very destructive to the wildlife species found in the lake, including the African manatee,” he said.

Biological control — using the Salvinia weevil, the natural enemy of the invasive plant — appears to be the only promising option.

The Salvinia weevil “feeds specifically on the invasive plant,” Kamla said. “That is the option we are planning to use. The method has been used worldwide successfully in areas where Salvinia spread. No side effects on humans or on the environment have been documented so far.”

Effective use of the Salvinia weevil was applied in the Senegal River in the early 2000s.

“The weevils are already here in Cameroon, imported from the United States. Now we are mass-rearing them. We will be releasing the weevil into the lake as soon as we receive authorization from the government,” Kamla said.

Cameroon’s Minister of Forestry and Wildlife Jules Doret Ndongo has set up a task force to oversee eradication of the invasive plant.

“Lake Ossa obviously has a strong ecotourism potential,” Ndongo said. “Salvinia is an enemy that must be eradicated in order to preserve the attractiveness of the site. The government could not remain indifferent, given that every 10 days the plant almost doubles the area it invades.”

As for the origin of the invasive plant, Kamla said analysis points partly to human activity.

“This lake is connected to River Sanaga where a lot of human activity is being carried out including the construction of the Lom Pangar hydroelectric power dam,” he said.

“We realized in 2016 that there was heavy concentration of nutrients, such as nitrogen and phosphorus in Lake Ossa, doubling from the historical value of 1985,” said Kamla. These are elements that plants need to grow, he said. It is an increase in the concentration of these nutrients in the lake that is causing the invasive plants to proliferate.

Lake Ossa used to harbor a minimum of 50 individual African manatees, the least-studied of the three manatee species in genus Trichechus. Manatees never leave the water but, like all marine mammals, they must surface about every five minutes to breathe.

“Since the invasive plant started emerging on the surface of Lake Ossa, we have discovered two dead African manatees on the lake’s surface, although we couldn’t determine the exact cause of death. But most of the manatees may be leaving the lake for adjacent rivers where they can have better access to food and less disturbance from the invasive plant,” Kamla said.

Today, there are fewer than 10,000 West African manatees, according to estimates, and they spread across 21 African countries. Illegal hunting and accidental catch in fishing nets constitute the biggest threat to African manatee populations.