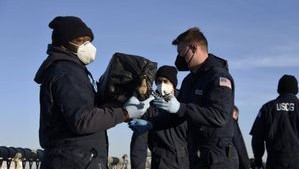 A video shared by United States Coast Guard officials shows footage confirming the seizure of cocaine from international drug smugglers that is worth almost $100 million.

The United States Coast Guard officials Campbell crew offloaded more than three tons of cocaine estimated to be worth more than $97 million in an operation to obstruct transnational crime organizations.

The Coast Guard crew apprehended the contraband from drug runners in the Pacific Ocean, then transferring the contents to Port Everglades in Fort Lauderdale, Florida on 4th February 2021.

As per a report by United States Sentencing Commission, cocaine crack (a cheaper and less pure form of cocaine) makes up 9.5 percent of the drugs smuggled to the US, and cocaine powder makes 20.5 percent of the total drugs. Cocaine crack and cocaine powder together make the second highest percentage of drugs smuggled in the United States at 30 percent, just behind methamphetamine at 31.5 percent.

As per American Addiction Center, a large portion of the drugs coming in the United States are from Mexico.

“The DEA puts much of its focus on trafficking from Mexican drug cartels because not only do they control a large share of the drug smuggling into the U.S., they are also responsible for much of the drug distribution within the U.S” states the American Addiction Center.

The recent data about drug smuggling in the USA show that cocaine trafficking is on a downward trend whereas trafficking related to methamphetamine and heroin has been on a constant increase since 2009.

The number of drug overdose deaths was 67,367 as of 2018 as reported by the Centres for disease control and prevention.

“With an influx of trafficked drugs, users cannot be sure if what they are buying is truly a prescription opioid or if it’s laced with other harmful adulterants like fentanyl, carfentanil, or pink. In 2014, 129 people died every day from a drug overdose, and 2017 saw a majority of overdose deaths involving synthetic opioid” states a study published by JAMA.

“The Campbells crew patrolled the Eastern Pacific Ocean in support of enhanced counter-narcotics operations in the Western Hemisphere to disrupt transnational criminal organizations” said the Defense Visual Information Distribution Service on their website along with pictures of the operation.

The Campbell ship routinely patrols parts of the Atlantic Ocean, starting from the Gulf of Maine up to the Caribbean Sea, especially designed and prepared for carrying out multiple mission tasks in law enforcement.