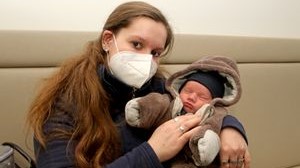 OSNABRUCK, Germany — In a rare incident, a 24-year-old mother gave birth to a baby boy in a rescue helicopter while being rushed to the hospital.

The incident took place in the city of Osnabrueck in the German state of North Rhine-Westphalia when the chopper was in midair.

The mother identified as Sonja Lammers couldn’t wait till the helicopter could reach the hospital. The baby was later named Martin Timotheus.

Due to Sonja’s rapid contradictions, the rescue control center called a helicopter to pick her and take her to the nearest hospital. Later, the air rescue service of the non-profit ADAC air rescue came to their house and rushed to her aid.

Reportedly, despite the location, the birth of Sonja’s first child has been a nice experience. “We were in the air for maybe two minutes when the time came. It went very quickly and I had no pain at all,” said Sonja.

Martin’s father Tobias Lammers had to come to the hospital by car. The helicopter officials did not allow him to fly with them.

The ten-minute flight on the Christoph Europe 2 appeared to be too long, as the delivery was immediately needed.

Christoph Europa 2 is one of the 50 ADAC helicopters, stationed in the town of Rheine. There are about 15 doctors, all specialists which are working in the helicopter in shift rotations. They have around 1,200-1,400 missions per year.

The baby was born 180 seconds after the helicopter arrived and collected his mother. The helicopter was at a speed of over 200 kilometers per hour. However, it failed to arrive at the Osnabrueck Hospital, on time, baby Martin had to be delivered inside the chopper.

It was the first case of such kind in 28 years. As per an ADAC spokesman, it is an absolute rarity to have a baby delivered on a helicopter.

“This is a very stressful time for everyone in the rescue service, but birth in one of our helicopters is wonderful news. It gives people hope,” said Jochen Oesterle, press spokesperson at the ADAC air rescue team.

The mother and the child are in excellent health conditions. Martin weighs 3,620 grams and his size is 53 centimeters.

Both she and her husband Tobias were completely surprised and never expected something like this to happen. They hoped that their future children would have less complicated births.

The hospital staff and employees were surprised about Martin’s birth. “Babies are born every day in the hospital and each of them has a special story. But this is a very special moment, especially now in the Corona period,” said Anke Kramer, the head of the baby delivery team.

Parenting has been one of the toughest jobs that parents undergo. Though there are several rules about helicopter parenting nothing as such has been noted down what care should be taken if a baby is born on the helicopter.