Trump's second impeachment trial ended with the Senate voting to acquit him on a charge of inciting insurrection at the Capitol.
By Amanda Robert Honigfort February 14, 2021
Facebook
Twitter
Linkedin
Email 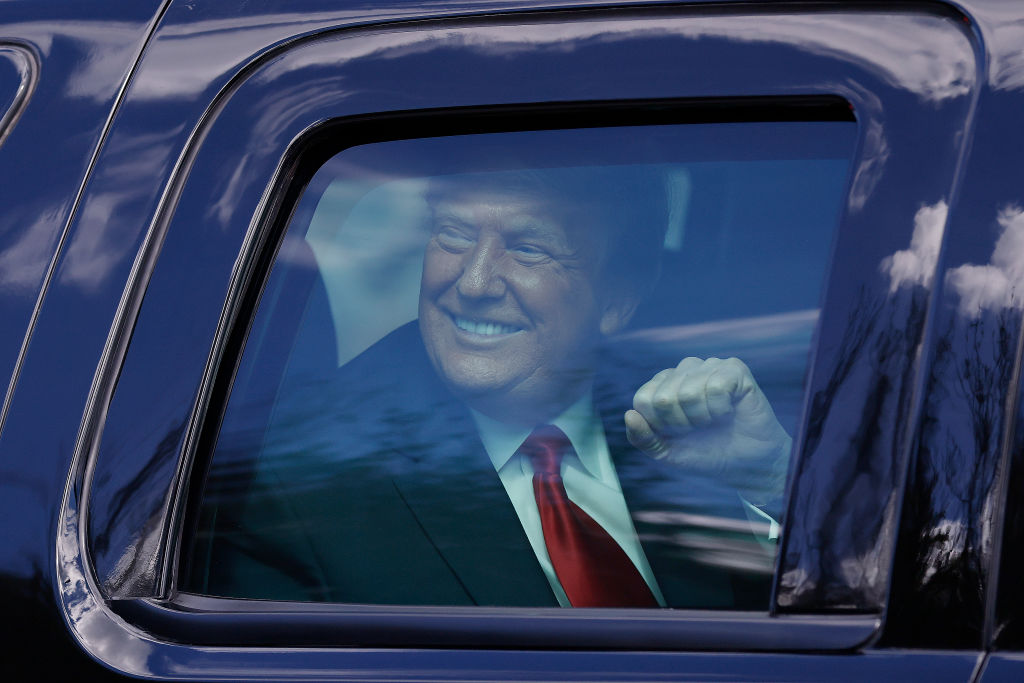 Former President Donald J. Trump, pictured waving to supporters lined along on the route to his Mar-a-Lago estate in West Palm Beach, Fla., was acquitted by the Senate Feb. 13 after being impeached a second time on charges of inciting insurrection at the U.S. Capitol Jan. 6. (Michael Reaves/Getty Images)

Former President Donald J. Trump’s second Senate impeachment trial ended Saturday in the same way as his first: an acquittal that could reenergize the political movement he launched with an escalator ride in 2015. Seven Republican senators voted to convict him on a charge of inciting insurrection in connection with a deadly Jan. 6 riot at the U.S. Capitol; Democrats would have needed 17 crossover votes to reach the required two-thirds supermajority.

Two of the seven GOP defectors have announced they are retiring after the 2022 election. Another three began new six-year terms last month.

“This has been yet another phase of the greatest witch hunt in the history of our Country” Trump said in an email statement following his acquittal. “No president has ever gone through anything like it, and it continues because our opponents cannot forget the almost 75 million people, the highest number ever for a sitting president, who voted for us just a few short months ago.”

He also hinted at the future.

“Our historic, patriotic and beautiful movement to Make America Great Again has only just begun,” the statement read. “In the months ahead I have much to share with you, and I look forward to continuing our incredible journey together to achieve American greatness for all of our people.”

The sole impeachment charge this time centered on whether Trump violated his oath of office and committed a crime against the U.S. Constitution by inciting the insurrection.

“Impeachment is a remedy separate and apart from the criminal justice system and for good reason,” House impeachment manager Rep. Joe D. Neguse (D-Colo.) said. “The presidency comes with special powers, extraordinary powers, not bestowed on ordinary citizens. And if those powers are abused they can cause great damage to this country, and they have to be dealt with in a separate forum.”

Senators had already voted 56–44 to declare the trial constitutional, after several senators argued Trump could no longer be tried since he had already left office. The Constitution reserves impeachment as a mechanism to punish “the president,” and is silent on impeaching a former commander-in-chief.

Over the course of two days, the House managers serving as prosecutors laid out a detailed timeline of the events of Jan. 6, accompanied by annotated security footage of the breach at the Capitol and video clips of Trump’s speech to supporters earlier that day. They argued that Trump violated his path of office by inciting the riot and then doing nothing to protect the Capitol and lawmakers, or to restore order. The chaos led to five deaths and scores of injuries, according to Metropolitan Police in Washington, D.C.

Democrats appeared to be making their case not just to senators sitting as jurors, but to the American people, hoping Trump would emerge unelectable, even in the event of an acquittal by the Senate.

The House managers’ case also included a compilation of video and social media posts in which Trump spread unsubstantiated claims that the November 2020 election, which he lost to President Joseph R. Biden Jr., was “stolen” and “rigged.”

“We are not here to punish Donald Trump,” Rep. Diana DeGette (D-Colo.) said. “We are here to prevent the seeds of hatred that he planted from bearing any more fruit. This must be our wakeup call. We must condemn it, because the threat is not over.”

“Some people think this trial is a contest of lawyers, or even worse, a competition between political parties,” said House impeachment manager Jamie B. Raskin (D-Md.). “It’s neither. It’s a moment of truth for America.”

“I’m angry, I’m disturbed, I’m sad. We lived this once and that was awful,” Murkowski said Tuesday after the trial opened. “When you see all the pieces of this come together, the total awareness of the enormity of this, the threat not just to us as people, as lawmakers, but the threat to the institution, and what Congress represents, it’s disturbing.”

Trump’s attorneys used only about three of their allotted 16 hours to present their arguments, before taking questions.

Their video playbook included footage from as early as 2016 in which Democrats said again and again that they would “fight,” a word they pilloried Trump all week for using to mobilize the attacking mob on Jan. 6. A separate thematic reel compared the breach of the Capitol with the most violent moments of the Black Lives Matter protests of 2014 and 2020. The clips were paired with video of Democrats praising the protesters following riots and arsons.

Trump’s defense also replayed clips that showed Democrats questioning the legitimacy of elections and speculating that some votes might have remained uncounted. Again and again, Trump attorney David Schoen used Democrats’ former words against them, including statements from the 1998 impeachment trial of former President Bill J. Clinton.

Neguse said in response that he trusted senators could distinguish between others’ words and Trump’s.

“What you will not find in those video montages that they showed you is any of those speeches, those remarks, culminating in a violent insurrection on our nation’s Capitol. That’s the difference,” said Neguse.

“We should all reflect and acknowledge that the rhetoric has gotten to be too much,” said van der Veen. “Most would like it to stop. … But you have to apply the First Amendment blindly. She is blind, Lady Justice.”

Though they were inappropriate, he said, Trump’s comments are protected by the First Amendment.

Closing arguments and a final vote were expected Saturday morning, until House managers requested the ability to call witnesses in light of new information from Rep. Jaime L. Herrera Beutler (R-Wash.). She described a call Rep. Kevin O. McCarthy (R-Calif.), the minority leader, had with Trump in the midst of the Jan. 6 riot.

McCarthy, she said, begged Trump to call off the mob and denounce the violence, to which Trump responded “Well, Kevin, I guess these people are just more angry about the election and upset than you are.”

House managers and Trump’s attorneys later struck a deal to admit a statement from Herrera Beutler into the official trial record instead of seeking testimony. The final vote followed.

“Our Constitution and our country is more important than any one person. I voted to convict President Trump because he is guilty,” Said Sen. Cassidy, one of the few Republicans to cross party lines.

“My hope is that with today’s vote America can begin to move forward and focus on the critical issues facing our country today,” Sen. Burr said in a statement.