Supreme Court Of India Sends Notice To Twitter And Government

The Supreme Court of India issued a notice to the Bharatiya Janata Party-led Indian government and microblogging website Twitter over a public interest litigation asking for curbs on hate news, fake news, incendiary and seditious content on social media platforms.

This comes amid the tussle between microblogging website Twitter and the Indian government over taking down around 1,178 accounts it feels are spreading misinformation about the over two-month-long farmers’ protest against new farm laws. India had earlier asked the website to block another 257 accounts.

The Feb. 12 Supreme Court order came over a plea filed by Vinit Goenka, a leader with India’s ruling party, through advocate Ashwani Dubey in 2020.

“There are numerous fake Twitter handles in the name of high-profile dignitaries such as the president of India, vice-president of India, chief justice of India, including Supreme Court and high court judges that use real photos of constitutional authorities and eminent citizens,” states the petition.

“A common man relies upon the messages published from these Twitter handles and Facebook accounts,” it states. 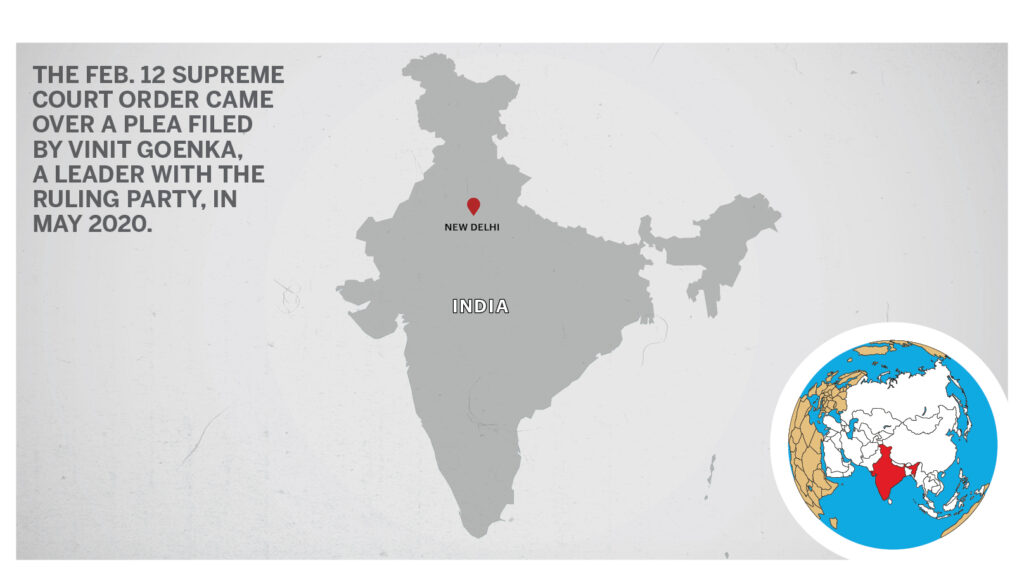 The petition states that fake news is the root cause of several riots and fake accounts are used to spread casteism, regionalism, radicalism, communalism.

“The petition was filed in May 2020,” Dubey told Zenger News.

“There is no law in the country (India) that can check malicious online contents which create a rift in the society. Therefore, the central government should be directed to formulate a law regarding this,” he said.

Twitter has 35 million users in India and Facebook has 350 million. Experts said around 10 percent of accounts from both are duplicate or fake, the petition states.

“Many people use fake Twitter handles and Facebook accounts for personal interests such as gaining financial income from one person or blackmailing his opponents,” the plea states.

Dubey said social media platforms from outside India were not following law of the land, like other electronic and print media organizations.

“If the same had been done by Indian organizations, actions would have followed as per the Indian Penal Code,” he said.

“However, in China, they are bound to follow the Chinese law, in Europe, there is a separate law that is followed for the social media handles. In the U.S., the account of Donald Trump was banned for life. They do not allow any seditious content. But in India, they talk about ‘freedom of speech and expression’,” said Dubey.

He said the ruckus created during the farmers’ tractor rally on India’s Republic Day was propagated from outside the country. The Delhi Police also said it had identified more than 300 social media handles used for pushing malicious content.

Twitter did not block all the handles because it said that the government’s orders were not in line with the Indian laws. It, however, took steps to reduce the visibility of the hashtags containing harmful content, which included prohibiting them from trending on Twitter. It also permanently suspended several accounts in certain cases of violations of their rules.

“These accounts continue to be available outside of India,” said Twitter in a statement on Feb. 10.

“Over the course of the last 10 days, Twitter has been served with several separate blocking orders by the Ministry of Electronics and Information Technology (MeitY), Government of India, under Section 69A of the Information Technology Act. Out of these, two were emergency blocking orders that we temporarily complied with but subsequently restored access to the content in a manner that we believe was consistent with Indian law. After we communicated this to MeitY, we were served with a non-compliance notice,” it said.

Jack Dorsey, the chief executive of Twitter, recently drew criticism over neutrality from the government after he liked a few tweets by celebrities supporting the farmers’ protest.