The workspace is an amalgamation of Mughal aesthetics and corporate functionality.
By Ojaswin Kathuria February 13, 2021
Facebook
Twitter
Linkedin
Email 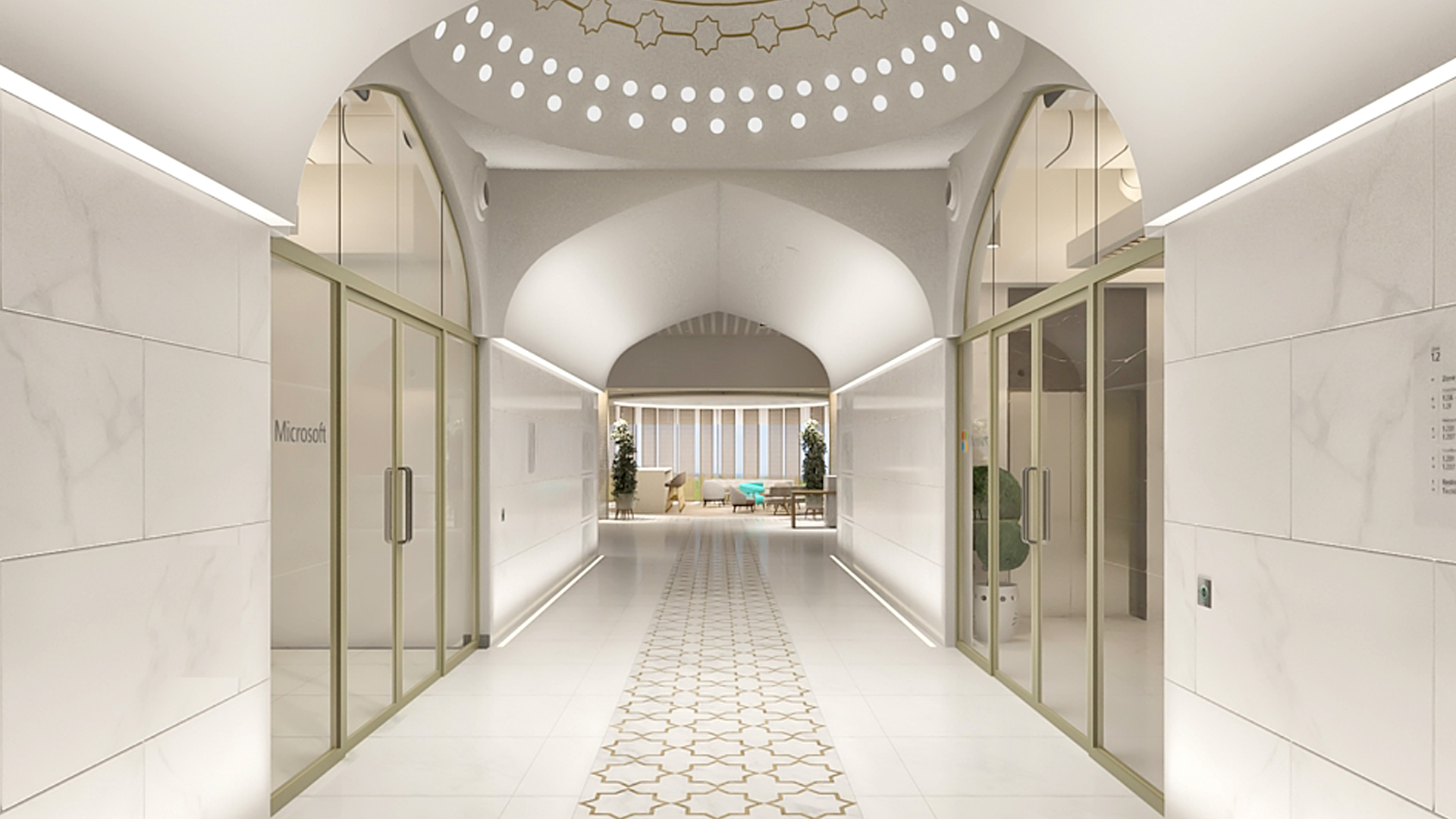 The new Microsoft India Development Center (IDC) at Noida takes inspiration from the magnificent Taj Mahal, one of the seven wonders of the world. (Microsoft)

The new Microsoft India Development Center at Noida, near Indian capital New Delhi, is not what you’d expect your typical tech office to look like. The newly constructed building takes inspiration from the Taj Mahal, one of the seven wonders of the world.

The Taj Mahal is a marble mausoleum built by order of Mughal emperor Shah Jahan between 1631 and 1648 to house the remains of his wife Mumtaz Mahal. The tomb also has the grave of Shah Jahan. The Taj Mahal is on the UNESCO world heritage site list and is considered a great example of Indo-Islamic architecture.

Like the Taj Mahal, Microsoft’s architectural wonder is clad in ivory-white marble, has Mughal-era style latticed windows, high domes, and arches, and is decorated with inlays and paintings created by local craftsmen of the region.

There are a series of surprise elements all over the workspace.

As soon as you step in, you can see a latticed artwork with the impression of Bill Gates, which is visible only at certain angles.

The lockers at the Microsoft workplace have another story painted on them — that of a thousand elephants which, according to legend, carried marble stones to the site of Taj Mahal. There are murals with floral iconography, but if one looks closer, the flowers are technology symbols, like Wi-Fi.

“During the pandemic-related lockdown, the work on the building came to a standstill, rendering all the artisans and craftsmen unemployed. However, the company made sure that they were taken care of during the lockdown. We provided the artisans with safe and hygienic accommodations as well as meals,” Mitra said.

The 90,000 square feet office is spread across the top three floors of a six-story building.

“The Taj Mahal is one of the most distinctive buildings on the planet,” said Arunjot Singh Bhalla, managing director of RSP Design Consultants, the global design consultancy who designed this space, in a press release.

“The challenge was: How does one possibly interpret the Taj Mahal and go one step further and apply it to an office?” Bhalla said.

Unlike most corporate or business offices around the world, the Noida Microsoft development center is where the state-of-the-art, tech-driven workspace converges with a design scheme that references significant Indian architecture.

“The space is a visual ode to a bygone era. Yet it’s also a modern-day workplace like no other,” said Mitra.

“The architects married India’s architecture’s symmetry and decorative aspects with functionality. They drew heavily from the Taj Mahal’s aesthetics including white marble sourced from Jaipur, along with inlay work with semi-precious stones,” said Mitra.

He said that the focus of Microsoft is to create sustainable ideas and help nurture local talent for all future projects.

The office space has been created with inclusivity in mind. Braille signage, hazard warnings, and access ramps have been provided along with customized counters for wheelchairs.

The office is designed in line with Microsoft’s commitment to sustainability. To reduce the carbon footprint, the facility has implemented water conservation and energy conservation measures. The building is LEED platinum rated, which means it caters to the highest sustainability standards of construction and operation in the world.

Two percent of the office is covered in greenery. “We did a lot of study on the biophilia of the site, and the local plants that would survive in Noida,” Bhalla said.

“Mughal-era-inspired structures, interior designs, or even décor pieces hold rich appeal in terms of art and culture. A major part of Indian architecture and designs come from the Mughal era,” said Arshdeep Singh, an architect based in Delhi.

“Incorporating this into an office for a tech giant like Microsoft and employing local craftsmen for the traditional artwork is commendable,” Singh said.

“The office fulfills modern-day corporate requirements with the aesthetics of the Mughal era. Well-designed workplaces help increase the efficiency of employees and give them a sense of belonging,” said Singh.

The campus, which is one of the largest research and development centers outside the Redmond, Washington, headquarters, will accommodate the Xbox team, making the Noida campus the first one in India to host a gaming team.

It is Microsoft’s third development center in India after Bengaluru and Hyderabad.