The 'What's Happening!!' star credits the man known to most as George Jefferson for helping him move on up in his career.
By Percy Crawford February 12, 2021
Facebook
Twitter
Linkedin
Email 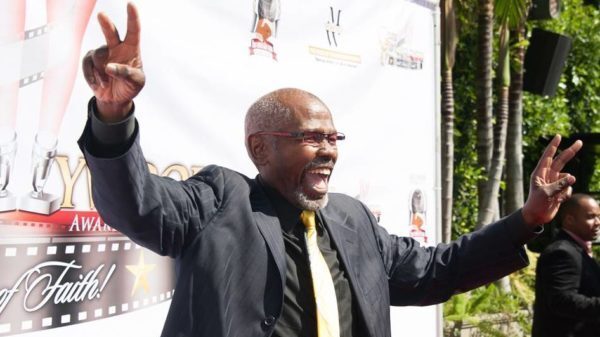 After getting his start on the popular ’70s sitcom “The Jeffersons”, Ernest Lee Thomas would evolve into one of the more well-known actors of his generation. His roles have transcended time. Old schoolers are familiar with his popular Raj character on “What’s Happening!!” and “What’s Happening Now!!”, while millennials are more familiar with his work on “Everybody Hates Chris” as flirty funeral director Mr. Omar.

Thomas got his big break as Ronnie Walker on “The Jeffersons”. Flanked by stars Isabel Sanford, Sherman Hemsley, Marla Gibbs, Roxie Roker and Franklin Cover, Thomas hit the set looking to impress. It was a feat that was more easily said than done in the eyes of Hemsley — at least on the surface that is. From afar, Helmsley took notice of the budding young star and eventually gravitated toward him while offering him advice of how to succeed in the industry.

Zenger News: It’s an honor to speak with you, Mr. Thomas. I have been a huge supporter for a very long time. How are you doing?

Zenger: You got your start on “The Jeffersons”. On Feb. 1, Sherman Hemsley would have turned 83 if he was still with us. He actually passed away on my birthday in 2012. What memories do you have of Sherman from the show or just in general?

Thomas: Sherman, oh my Lord. Sherman … people don’t realize how kind he was. He just had a huge, kind soul. But he can fool you because he’s distant until he knows you. The initial thing is, he didn’t speak to me at all (laughing). So, when I did “The Jeffersons”, I was a little taken aback because I was a fan of the show of course. It was my first sitcom ever. And they took me around the table to shake hands with everybody, “This is Isabel [Sanford], this is so-and-so,” and when I got to Sherman, he just looked at my hand (laughing). I said, “Okay, I’m Ernest Thomas.” He said, “So what!” Isabel or Marla [Gibbs], one of them said, “Don’t mind him.”

But I did. I just smiled through it, but that whole day it bothered me. Actually, that whole week it bothered me because you rehearsed that whole week and then you filmed on the fifth day. It made me want to impress him. I was trying to, but he wasn’t laughing at anything I was doing, so you don’t know where he is. But once we got in front of the audience, oh my Lord, God just smiled on me. Everything that I said, they just laughed and laughed. They laughed at his reaction to me and my reaction to him. It was just perfect.

So, afterwards they have to introduce you, curtain call. And the announcer called me Ernest Thompson. And I’m like, “Oh no!” But Sherman comes out, “No, his name is Ernest Thomas, and he’s going to be a big star!” After that he came up to me, “Look man, I’m telling you, you’re going to have your own show one day; you hear me? But look now, you stay to yourself because people are energy vampires. They’ll just take all your energy and all your money; and when you don’t have nothing, they are going to desert you. So, promise me to stay to yourself.” I wish I had lived up to that one, but I didn’t. I opened the door to everybody. But that was, Sherman Hemsley. That was him.

And even after that, I didn’t hear from him. It’s not like he would call me and check on me, but people that were close to him that went to his house and all that say, “You know he watches reruns all the time, right?” I said, “Really? Wow!” I would’ve never known that. I never hear from him. They said, “He don’t let you know that.” That’s Sherman. And he loved rock ‘n’ roll believe it or not. That’s his favorite type of music. He was into his rock ‘n’ roll. He also liked the [Frank] Sinatra stuff. He actually had an act. I forgot the name, but he had these beautiful girls as the backup dancers like Dean Martin had. He would do some sketches and then he would sing some of those Sinatra-type songs and he would do a little James Brown-type stuff. His manager told him rock ‘n’ roll wouldn’t be a good look for Vegas because of his age. He just incorporated more of the James Brown, Dean Martin and Frank Sinatra-type of stuff. A lot of energy. I snuck in to see it.

He had a manager, a really nice guy, Ken Johnston. Ken was another kind person. And his only client was Sherman. Someone suggested to me after I got “What’s Happening Now!!”, which was several years later, that I try to get with Ken Johnston. So, I called him, and he said, “Look man, I like you kid, but Sherman doesn’t want me to have anyone else. But I like you, so I’m going to help you out, but you can’t tell Sherman that I’m your manager.” So, it had to be like that. When Sherman was trying to get his Vegas act together, he said, “I really hate that he’s doing this Vegas act. I wish he would get this out of his mind, but he wants to do this act. I want you to check it out.”

So, he told me the location and said, “When you come in, ease in and stay in like the last row. Sneak in. The lights won’t be on in the auditorium anyways, and tell me what you think.” I actually thought it was good. It was full of energy; it had his personality in it. I told Ken that. The manager wasn’t gung-ho for that.

Then Sherman got into trouble. The Indians from the casino resort saved him. He had borrowed money from the mafia. He had won a judgement for a film he had done. In America, it didn’t come out, but it was making a lot of money overseas. So, he sued the guy, and they awarded Sherman $2 million. You know you gotta wait on stuff, right? So, he went to the mafia, and the mafia always says, “When can I have my money?” Once you give them a deadline, ain’t no changing it, right? They didn’t give him the settlement money in time. I don’t think they ever gave him the money actually. The guy kept taking him back to court and all that.

So, Sherman had to hide and, thank God, the Indians saved his life!