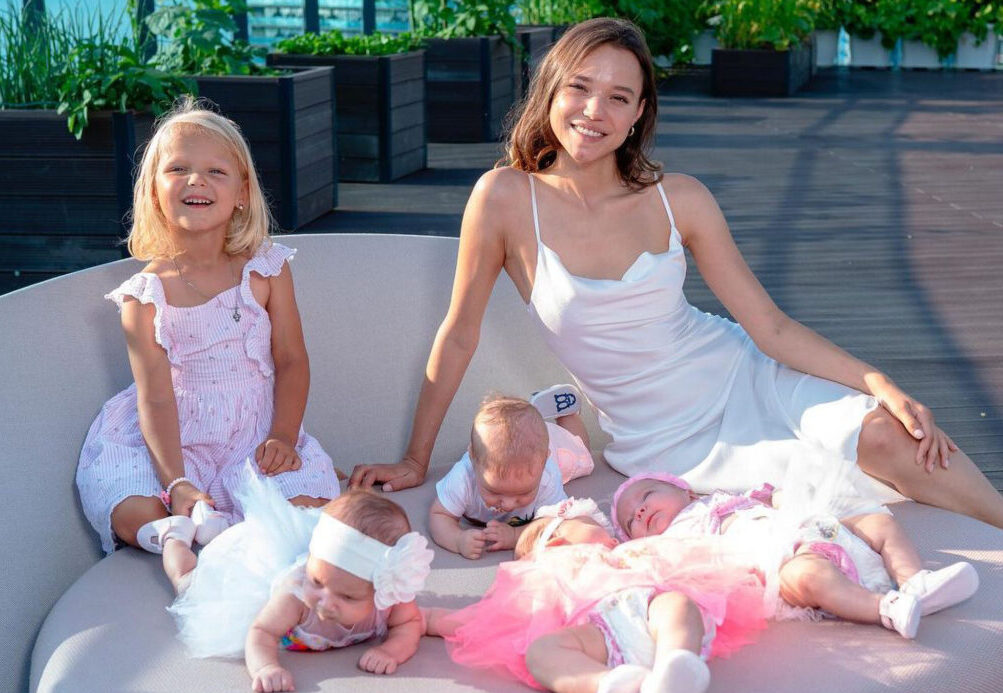 A millionaire Moscow mom already raising 11 of her own biological children now hopes to have dozens more by using surrogate mothers.

Russian mom Christina Ozturk, 23, lives with her wealthy, hotel owner husband Galip Ozturk in the coastal town of Batumi, Georgia, where it is legal to use surrogate mothers.

After 10 surrogate babies, plus one that was born naturally for Christina, the couple have the process down to a fine art.

All the potential surrogates go through counseling and sign legal paperwork before becoming pregnant with children genetically from Christina and her husband.

The young mom, who is originally from Moscow, was a single mother when she decided to take a break by going to the sea in Batumi, the second-largest city in Georgia on the coast of the Black Sea.

The subtropical tourist destination at the foot of the Caucasus is often referred to as the “Las Vegas of the Black Sea.”

She said it was love at first sight when she met Galip on her first day there, and described him as her “mentor, guide and fairytale prince all rolled into one.”

Galip said it was love at first sight for him as well.

“She is so easy to be with, she always has a smile on her lips and yet at the same time is shy and mysterious,” he said. “She was the kind of wife I always wanted for myself, an uncut diamond where I saw what a pure and kind heart she had.”

After the meeting things moved quickly, with Christina taking her young daughter Vika with her and moving to Batumi. She said that despite his age, she he had no objections to the large family, even though he already had adult children of his own.

The couple also agreed they wanted as many children as possible, but they were ambitious and realized quickly her reproductive ability was not enough to meet their demands.

They decided to use surrogate mothers, who come at a total cost of around 8,000 euros per child. With no constraint on their finances, they now have 10 babies in addition to Christina’s daughter Vika that she brought with her into the marriage.

“At the moment, I have 10 children with the latest addition, Olivia, who arrived at the end of last month. I gave birth to my eldest daughter Vika myself six years ago. The rest of the children are genetically ours from my husband and I, but were carried by surrogates.”

On social media, they talk about having 105 children but admit this was just a random number. “I don’t know how many they will eventually be, but we certainly don’t plan to stop at 10,” she said.

“We just not ready to talk about the final number. Everything has its time.”

They say before adding more children to their family they will let their existing children grow up a little. She also admits it proved more difficult than she thought to look after so many children at once.

“The clinic in Batumi chooses surrogate mothers for us and takes full responsibility for the process,” she said. “We are not personally acquainted with surrogate mothers and do not have direct contacts with them in order to avoid problems after pregnancy.”

“All communication takes place through the clinic, we only monitor health indicators, I make up a dietary menu for mothers so that the food is complete, I look at the test results.”

They only choose women who are young and have already had one pregnancy, and they also check to make sure the women don’t have bad habits or addictions.

The surrogates also get psychological counseling to make sure they are prepared for the challenge, which includes giving up the baby when it’s born.

She said whatever a surrogate thinks prior to the birth, it is often hard to hand over a child. The couple already had one surrogate mother who wanted to keep the child after it was born, she said. Yet because the babies are genetically from Christina and her husband, the surrogate had no rights and had to give it up.

Georgia has allowed surrogacy since 1997 — as long as the couple involved are heterosexual and married. The child that is born automatically goes to the people who provided the genetic material for the conception, according to the law.

While still using surrogates, Christina has not ruled out having other babies herself.

For the time being, though, managing the day-to-day planning of her household and giving care and attention to the children is the priority. After putting them to bed each night, she has to work on issues like making food and scheduling health appointments.

She said many people criticized her, assuming she had an army of nannies and that she could spend all her time in bars and restaurants with friends. But she says that is not the type of mother she is, and that she spends all of her time with her large family.