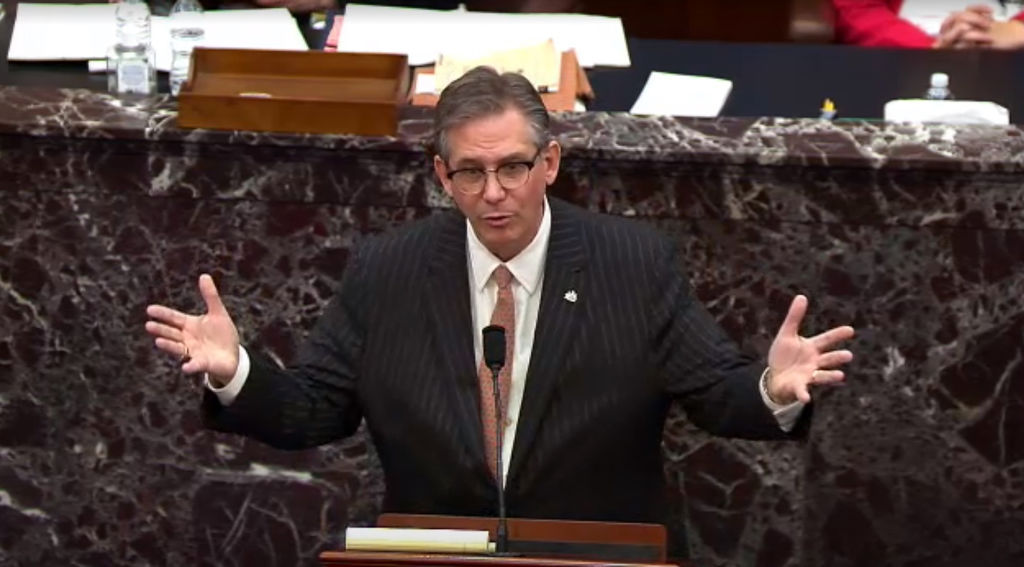 Bruce Castor, one of former President Donald Trump's attorneys, speaks on the first day of Trump's second impeachment trial at the U.S. Capitol on Feb. 9, 2021 in Washington, DC. House impeachment managers will make the case that Trump was “singularly responsible” for the January 6th attack at the U.S. Capitol and he should be convicted and barred from ever holding public office again. (Congress.gov via Getty Images)

The trial of Trump on charges of “inciting an insurrection” at the Capitol a month ago is historic for many reasons: It’s the first time a president has been impeached twice, and only the fourth Senate impeachment trial of a president in United States history.

But it’s also the first time a president has faced such a trial after losing office. The stakes are accordingly different, and with different stakes comes a different style.

Clips in the opening montage, which included images of violence on Jan. 6, painted a “very emotional” picture for the world to see, said James Wallner, a resident senior fellow in governance at free market-oriented policy research group, R Street.

He told Zenger News it was a different approach to the Democrats’ style last time.

“It’s not a legalistic argument, it’s not very detailed,” Wallner said. “The ‘very well produced’ video was more entertainment, and I don’t mean that in a negative sense.”

“It will keep the attention of the audience there better than last time, when the senators were visibly agitated,” he explained. “They didn’t enjoy having to sit in their chairs and be quiet and listen for hours on end.”

With the experience and hindsight of a do-over, the Democrats found a more persuasive style, said David Priess, author of “How to Get Rid of a President,” a history of presidents leaving office, and COO of the Lawfare Institution in Washington, D.C.

“What a compelling opening,” Preiss told Zenger. “You can make a compelling argument on this impeachment simply because the points are clear. Much clearer. If [the senators] fulfill their duty and are impartial, it should make a difference.”

After the opening, the Senate debated the constitutionality of whether Trump could actually be impeached given that he was already out of office. There is a precedent for such prosecution in the case of William Belknap, who was war secretary in the administration of President Ulysses S. Grant, according to Senate historical records.

Belknap was charged with having taken bribes. Though he handed Grant his resignation “minutes” before the House voted on his impeachment, the procedure continued. The Senate held a trial, but failed to gain enough votes to convict.

Many GOP senators now question whether the trial of Trump is constitutionally valid, given that he is out of office, and many constitutional experts disagree on the issue.

“The Senate has to dispose of it some way,” Wallner said. “That’s not unconstitutional. What I think is a more accurate depiction is that the Senate doesn’t have the constitution[al] authority, in my opinion, to convict someone not in office.”

Yet the Senate ultimately disagreed, voting 56-44 that the proceedings were constitutional. Six Republicans joined with the Democrats to form a slim majority.

Wallner said the Senate would now be changing its own rules to “somehow skip the removal question and go straight to disqualification,” which would ban Trump from ever holding federal office again and is seemingly the goal of the Democrats.

The historic nature of the proceedings were not lost on the Democrats.

As he introduced a resolution for the rules to govern the trial, Senate Majority Leader Chuck E. Schumer (D-N.Y.) called the proceedings “the gravest charges ever brought against a President of the United States in American history.”

Rep. Jamie B. Raskin (D-MD), the lead House impeachment manager and a former professor of constitutional law at American University, was unequivocal in his defense of a case being brought by the Democrats against a president already ousted.

“Our case is based on cold, hard facts. … President Trump has sent his lawyers here today to try to stop the Senate from hearing the facts of this case,” Raskin said. “They want to call the trial over before any evidence is even introduced.”

The Trump side, though, also dipped into history to make their points.

Bruce Castor, one of Trump’s defense attorneys, strongly denounced the violent attack of Jan. 6. Yet he argued that the Senate was now facing a danger that once undermined Athens and ancient Rome and led to their downfalls.

Going after a president no longer in office could create a bad precedent, he said.

“The moment they devolved into such partisanship, it’s not as though they ceased to exist,” Castor said, in reference to the Athenian and Roman polities.

“They ceased to exist as representative democracy,” he said.

He also tried to frame the charges against Trump as an assault on freedom of speech: “This trial is not about trading liberty for security,” Castor said. “It’s about suggesting it is a good idea to give up those liberties that we have so long fought for.”

The Jan. 6 violence was not Trump’s fault, he said: “If people go and commit lawless acts as a result of their beliefs and they cross the line, they should be locked up.”

With the issue of constitutionality dealt with, though, presentations from both sides can now proceed, potentially running through Sunday. The 50 Democrats in the Senate need 17 Republicans to join their ranks and convict Trump — a number that seems impossible given Tuesday’s 56-44 vote on the legitimacy of the trial itself.