Creating monthly singles for inclusion on an EP, rapper and singer Tonio Hall finds he has written some songs into fruition.
By Percy Lovell Crawford February 9, 2021
Facebook
Twitter
Linkedin
Email 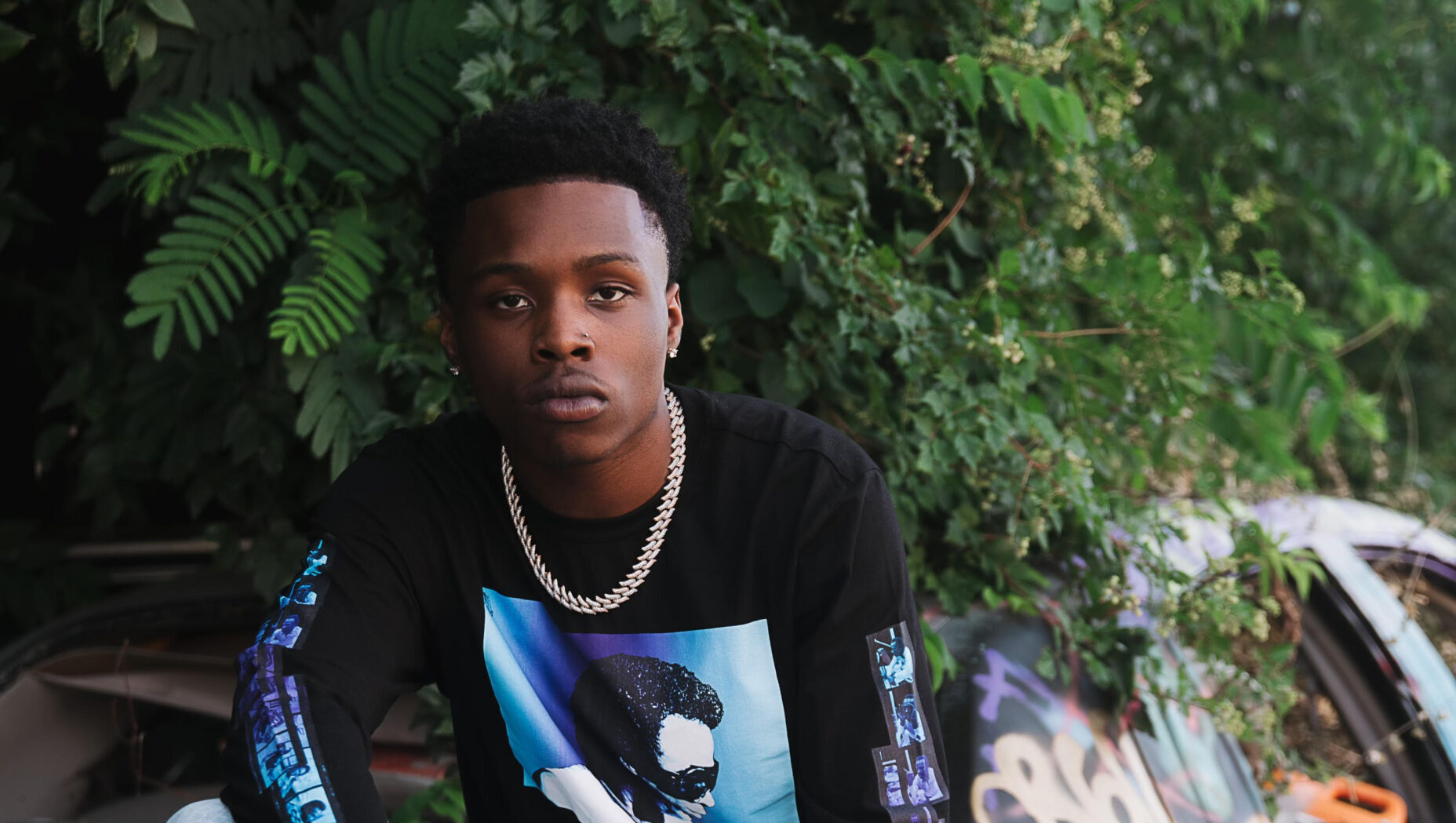 Tonio hopes to release one single per month until his much-anticipated EP drops later this year. (Photo by Nikon Ikon)

Social media lend a voice to the voiceless — and being heard can be life-changing. Dallas rapper Tonio Hall got the attention of R&B legend Donell Jones when he posted his cover of Jones’ “Life Goes On” on social media. Impressed with Hall’s talents, Jones shared the cover with his Instagram followers, and the exposure has been a career boost. Understanding the importance of feeding his fan base, Tonio hopes to release one single per month until his much-anticipated EP drops later this year.

His next single, “Anymore,” will drop on Valentine’s Day. In Dallas, which is predominantly a rap town, Tonio plans to tap into his rap lane while holding down the R&B side of things as well. In songs like “Don’t Push Me,” you can hear his ability to carry both tunes. Hall’s music expresses raw emotion and delves into personal situations. He deserves to be mentioned among the top up-and-coming R&B acts out there.

Zenger News chatted with Hall about his career plans, his musical influences, and how it feels to hear his music on the radio.

Tonio Hall: Everything been going decent, man. Everything is just right. Lets me know I’m on the right path and doing the right things.

Zenger: Looking at your social media pages, you have had a great couple of weeks. What does it mean for you to see those numbers going up and to have everyone embrace your work?

Zenger: How did it make you feel to get that stamp of approval from a legend like Donell Jones for your cover and twist of “Life Goes On”?

Zenger: Who are your musical influences?

Hall: I like Tank. A lot of “Kels” [R. Kelly] was played in the house. My pops liked Joe. He used to play that all the time. I’m inspired by all types of music. If I hear it, and I feel it, I’m inspired by it, because I’m a music head. Anything I hear, I can take something from it.

Zenger: When you do your covers, is there a process to selecting what songs you’re going to cover, or is it just whatever you are feeling at the moment?

Zenger: You’re putting a single out on Valentine’s Day titled “Anymore.” What can we expect from that joint?

Hall: Yeah! I got something dropping on V-Day. And right now, I just put out a song, “Call A Ni–ga.” You can get that now on streaming platforms and on YouTube. I just dropped the music video to that. That’s going crazy right now. They lovin’ that. I’m loving the response I’m getting from that. We just working right now, bro.

Zenger: Is that the goal right now — stay in the studio, remain busy and put out new content?

Zenger: Dallas is so synonymous with rap. Do you feel like you’re carrying the R&B genre on your back for the city?

Zenger: On “Don’t Push Me,” you definitely tap into both lanes. You hear the vocals, but you also rap a little bit, and the beat could go either way as well.

Hall: ‘Preciate you for that. I got some crazy stuff lined up. I can’t wait for y’all to hear this. I want to drop something once a month for real, for real. The goal is to drop once a month.

Zenger: Can we expect an album to spin off these monthly singles?

Hall: Yeah, you definitely can. It’s going to be coming real soon. We’re getting the track list and everything we want ready right now. I’m just building up a catalog and trying to get it ready to roll out. This first album is going to be relatable. It’s about me and some stuff I went through, but some songs on there, I wrote into fruition. I wasn’t going through it at the moment, but some of the stuff I wrote, I ended up going through it. Y’all gonna love it. I got the EP dropping in the next couple of months, and I got features on there. I feel like y’all gonna love it.

Zenger: You seem to draw from your own personal experiences a lot, and that passion and pain come through your lyrics and vocals.

Hall: It’s tapping into something that I can’t even really explain. It’s going into that mode. Magic comes out. I don’t even really know how to explain it. Definitely makes it easier drawing from my own personal situations, though.

Zenger: How do you decide whether you’re going to rap or sing on a track?

Hall: Nah, see with that, I know how to pick the beats. I don’t really wanna sound too cocky, but I know if a beat too sad, I know if a beat gonna turn me up. I know if I should do this type of cadence on the beat. I know if this going to go crazy. I’m never on the same shit. I always switch up. I can go in the studio and make a R&B song, then the next song I go and record right after that R&B song is a whole rap song. They be like, “What?” My team be confused [laughing].

Zenger: You recently got your song played on the radio. What was it like to hear yourself on the radio? What was that moment like?

Hall: Bruh … it’s an indescribable feeling. You can’t fathom that. Especially for someone like me and where I came from, you just can’t fathom it. It’s crazy.

Zenger: When did you realize this music thing could become a career? When did you have your “I can make this work” moment?

Hall: Really, I don’t think I’ve felt that shit yet, because I’m still working. I’m still grindin’. I don’t know, I really haven’t felt that part yet. You know how it is — I’m still in the midst of making everything happen. It is a humbling experience to see the comments, to see the numbers climbing. I’m glad everybody rockin’ with me. I’m rockin’ with them too. I’m just going to keep applying pressure. I’m not going to let up; keep working and keep giving these folks what they want.

Zenger: Do you have anyone in mind that you would like to work with eventually?

Hall: It’s a few people I want to work with, but really, I’m big on things being organic and natural vibes. I like having things come along naturally. If people wanna work, then I’m ready to work too. Let’s go in there and make some hits. We have been pressing the gas even harder since all this COVID stuff came along. It slowed down shows and things like that, but we have been pressing the gas and doing the things we can do. So, we’re working, man. If it makes sense, let’s work. So, when the world opens back up, we can just hit ’em, boom-boom. Just going crazy, ya heard me [laughing]. Like I said, bro, I’m gonna try and drop something every month until this EP comes out in the next couple of months. I want to give them folks something.

Zenger: If it wasn’t for Donell Jones sharing your cover on Instagram, I wouldn’t have discovered you, at least this soon. Props to the legend, Donell, and keep doing your thing. Your voice is amazing, brother.

Hall: Shout out the OG. I’m honored. Shout out, Donell. The EP will be coming out in the next couple of months. My song “Call A Ni–ga” is out right now on all streaming platforms and on YouTube. Go follow me on social media platforms @iamtoniohall. We gonna keep rockin’, man.

«Previous Post
I SAW THE SIEGE: ‘We Were Outnumbered’ On Capitol Hill, Says Congressional Aide»Next Post
Four-Time Grammy Nominee Candi Staton Has A Story She Wants To Tell