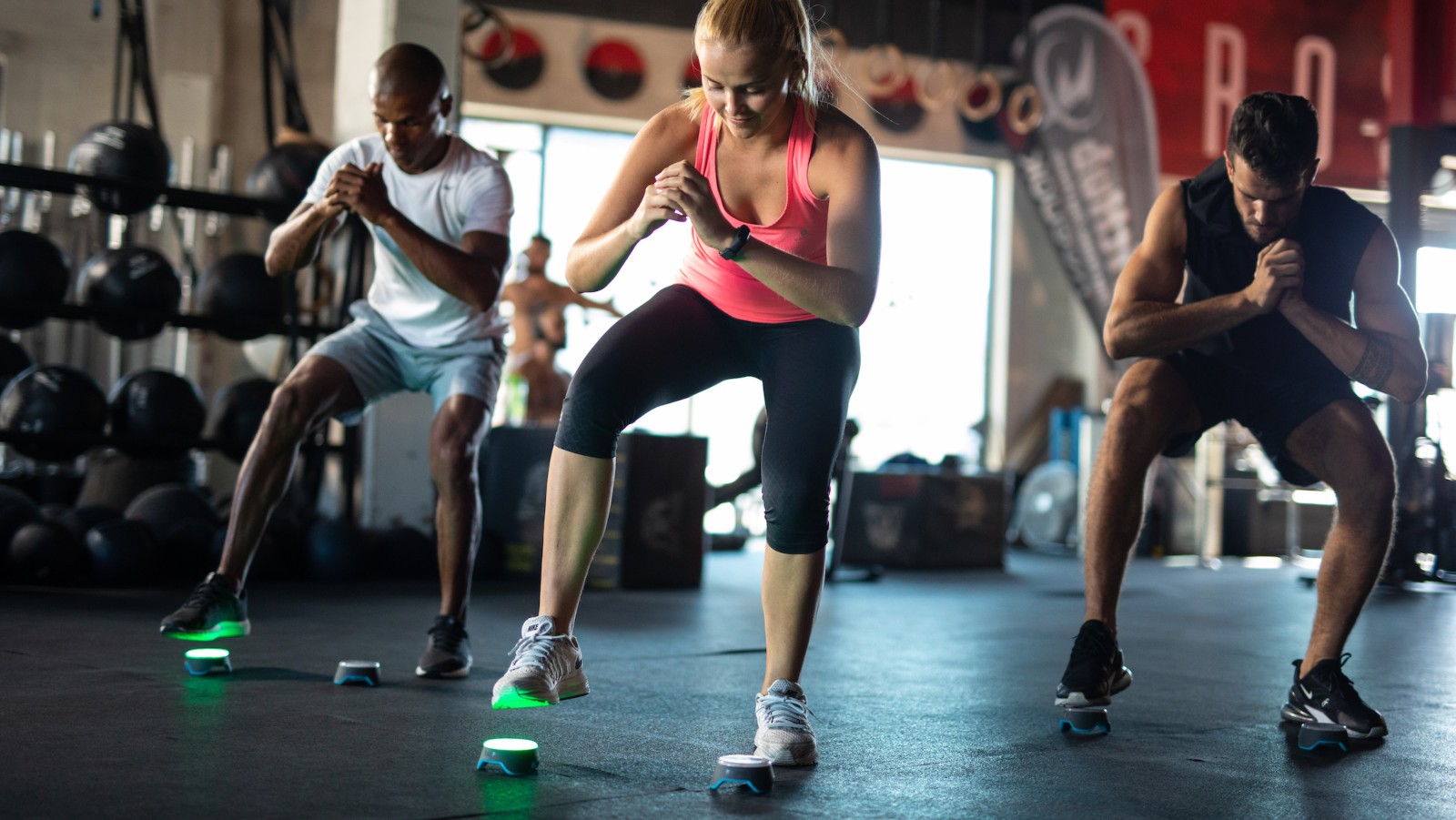 Working out witBlazePod increases the fun and intensity. (Photo courtesy of BlazePod)

Looking for an intense home workout to make up for your favorite gym that’s closed because of Covid-19?

Israeli startup BlazePod has developed what it dubs “Flash Reflex Training,” which uses small lighting pods that blink LEDs on and off in eight colors according to different pre-set patterns to guide your exercise routine.

Place a couple of pods on the ground and you can do core-strengthening plank pushups where you extend your arms to smack a pod when the light flashes.

Attach the pods using the product’s suction cup backing to a punching bag and up your boxing game with more rhythmic timed punches.

If it seems like fun, some 300,000 athletes in 120 countries will likely agree. BlazePod has generated $10 million in revenue since it launched 18 months ago — almost entirely on word of mouth. The company raised just a modest $1.3 million at the end of 2018, and at the end of 2020 raised a $8.5 million round led by Tel Aviv-based AP Partners.

BlazePod is part of the $4.5 billion wellbeing market, a sector that is only growing stronger as the coronavirus pandemic stretches on and on and on.

“Today more than ever, the fitness and professional sports market is ready for unique technologies that can maximize training and adapt to the changing needs of the product’s users,” BlazePod CEO Yaniv Shneiderman said.

BlazePods are controlled by an Android or iOS app. After you enter your personal data (weight, height and, for fun, your favorite color), you can choose from numerous workout routines, including martial arts, basketball, tennis, soccer, neurological therapy, children’s fitness and calisthenics.

You can create your own sessions or increase the duration for an existing activity. The pods communicate with each other via the app using low-energy Bluetooth. Each pod should last a full day before needing a recharge.

When you’re done with your routine, BlazePod logs your results. If you managed 14 hits in 30 seconds for the one-leg balance on Monday, can you improve your performance by Thursday?

There are single player activities and multi-player competitions. BlazePod will work indoors or outdoors (although not underwater, so avoid swimming pools and downpours).

One reviewer called an activity dubbed “Color Catch” his favorite. In this routine, you place the pods in a circle and assign each player a color. Players then stand in the middle of the circle and when the pods light up, run to tap their assigned color, then look for the next pod with that color and repeat until the buzzer sounds. The person with the most hits at the end of the competition wins.

Is BlazePod sturdy enough to withstand all the hitting it receives? After much trial and error, it is now, Shneiderman says.

“You can now kick it, punch it or run over it with a car and it won’t break. Although it depends on the type of car!”

Shneiderman says that the idea for BlazePod came from a well-known children’s game.

“It’s very much like ‘Simon Says’ on steroids,” he said. “The idea was to create a new physical activity experience, combining physical and cognitive abilities. It’s fun and amusing but also super hard and intense. It moves something in your brain as well, that helps you improve your performance.”

And while the product is intended mainly for adults, Shneiderman’s 5-year-old was an early beta tester. “We took it to the park and the kids loved it. That’s when we realized we had something unique.”

It’s a far cry from how athletes often train to this day — with cones and a coach standing over them with a stopwatch and a pad of paper.

“We are the next generation of core training,” Shneiderman says.

A four-pod kit costs $299, while the price jumps to $399 for a six-pod “trainers kit” suitable for personal trainers, physical therapists, coaches and sports facilities. A Trainer Pro Kit with 12 pods will set you back $779.

While you can buy BlazePod on Amazon as well as Dick’s Sporting Goods in the United States, the company first positioned the product for personal and professional trainers to use with their clients.

“That was the best way to start market penetration,” Shneiderman notes. BlazePod is now available through 40 different distributors.

Covid-19 changed BlazePod’s adoption strategy, motivating the company to reach out directly to athletes sooner than it might have otherwise. “You don’t have the facilities to train right now or the team to work out with, but you can still work out from home. With all the games delayed, this is the exact time when you need a tool like this,” Shneiderman says.

Plans to double in size

BlazePod has been able to reach the revenue levels it has in part because the company has not been giving away its product, as is often the case with new, mass market technologies. BlazePod has donated some units “to facilities working with kids with disabilities,” Shneiderman points out.

Lighting-based training systems are not entirely new. But “they were complicated to operate, expensive, static and required big walls,” Shneiderman says. “We are creating the same experience but with Bluetooth wireless technology. You can order something for $400 instead of $4,000.”

BlazePod has 20 people on staff — 17 in Israel, two in the US and one in Germany. The company plans to double in size in the next 12 months.

Ultimately, Shneiderman hopes that BlazePod will be available “everywhere — in any house, gym, hospital, kindergarten, the military.” (The U.S. Army is already a client.)

A fun, flashy way to light up your home workout appeared first on ISRAEL21c.