The Life Of A Tamale Vendor In Mexico

A job for the whole family, especially early in the morning. 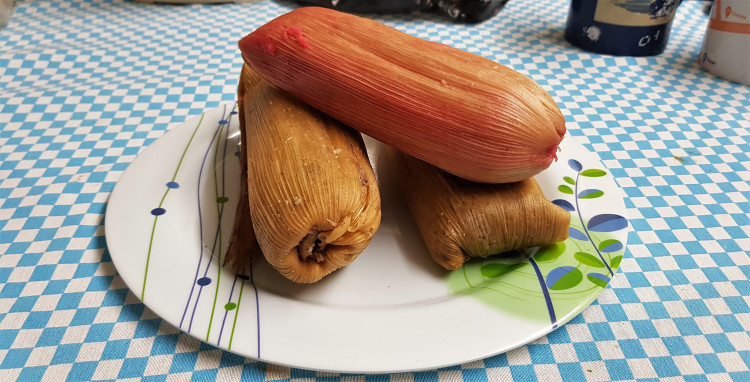 It is impossible to talk about Mexican food without mentioning the tamale.

Tamales are a dish made of nixtamalized corn dough, stuffed with either a vegan filling, chicken, beef, pork, cheese, fruit or seafood, and may or may not contain sauce. The dish, folded in corn or banana leaves, is a delicacy, especially as a morning meal.

Thousands of Mexican families have passed the knowledge of making this pre-Hispanic dish from generation to generation, creating unique recipes for each state of Mexico.

Those who prepare tamales for a living know it is an arduous task because, while not difficult, it can be complex to ensure that each tamale has a unique flavor.

People in Mexico’s central region use corn leaves to prepare their tamales, but those in the Mexican southeast use banana leaves. Moreover, the dough is also different, since they cook them over low heat. The most common filling is pork with a red sauce and an acuyo flavor to enhance its flavor. Oaxacan-style tamales also have banana-leaf foldings but are flatter than other Mexican tamales.

In Mexico City, people eat “guajolota,” a tamale sandwich. Although guajolotas can have any tamale filling inside, the most common one is made of chicken and green sauce, placed inside a bolillo bread. It is a popular breakfast item, alongside hot atole.

The key behind tamales? Their preparation

Wrapping a tamale is a family technique, passed down from elders to younger generations.

“I have been selling tamales ‘cernidos’ for almost 30 years, which people call ‘tamal chilango’ (a chilango is a person who hails from Mexico City). My parents were from the city of Puebla,” said Arcadio Sánchez Martínez, a tamale vendor in the city of Veracruz. “They sold their tamales at the toll booth located in San Martin in Puebla, and they were the ones who taught me how to make the dough and their fillings. Without these, a tamale could not be one.”

The process — finding ingredients, preparing them and selling tamales — takes almost a whole day, so every hour has to be used. Many would think that a tamalero workday begins in the morning. In reality, they have to settle in early to sell as most tamales as possible. Also, they have to finish their tamales’ preparation during the early hours of the day.

“We go to the market at around 2 p.m. to buy the dough, the leaves, meat, chicken, vegetables, lard, etc.,” said Sánchez Martínez. “After that, we get home and started preparing things, wash vegetables, prepare the stews, and have everything ready at 10 o’clock, so we can prepare about 80 to 100 tamales and put them to cook in the steamer. These are finished around 6 a.m., so we can go out to sell them. That is our daily journey.”

Cooking tamales every day is hard work, but this highly valued food item is a must-have for parties and celebrations.

“Thanks to my work line, I meet different people ranging from street sweepers, housewives, public transport drivers, politicians, and even artists, who recognize my flavor. I have a vast number of regular customers,” said Sánchez Martínez.

Selling tamales: is it a good business idea?

Of the 6.3 million tamale businesses in Mexico, 62.6% are informal street vendors, according to the 2019 report released by the National Institute of Statistics and Geography. Despite how precarious informal vending is, many families use it to get ahead and create wealth.

“Thanks to the food I serve people, I was able to put my children through school,” said Sánchez Martínez. “My daughter is a lawyer, and my son is still in nursing school. God willing, he will graduate next year. I feel proud that, thanks to the work my wife and I do daily, they have a professional career.”

Being a tamalero in Mexico is to continue a pre-Colombian tradition of several hundred years ago. It is to give a delicacy to people while at the same time generating an income — a tasty experience for all involved.