Super Bowl LV was not the first Super Bowl where an off-field incident had a big impact on the game.
By Mark Gray February 8, 2021
Facebook
Twitter
Linkedin
Email 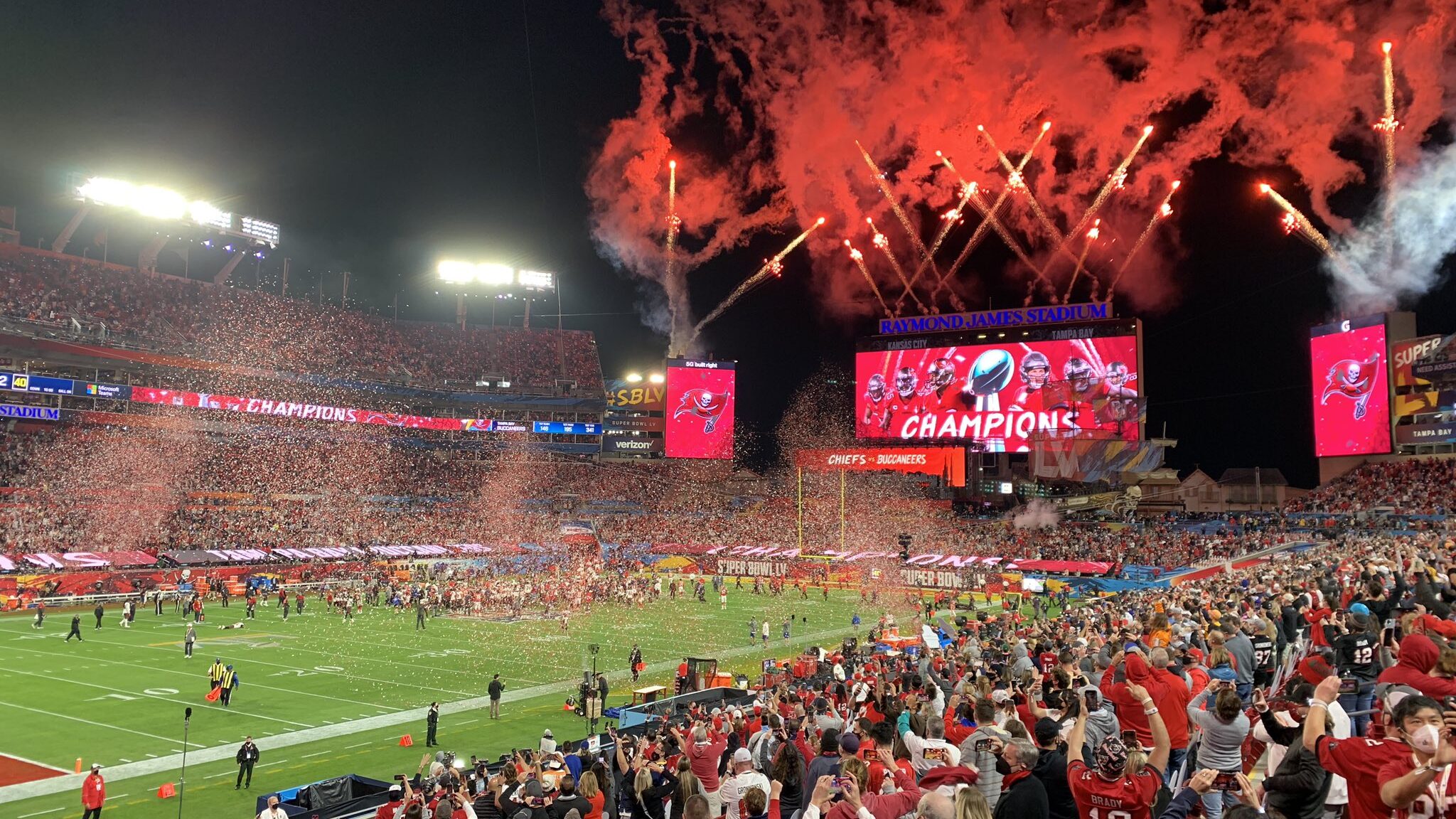 While the Tampa Bay Buccaneers became Super Bowl LV Champions, the Kansas City Chiefs showed a different side as as they were bogged down by distraction. (Raymond James Stadium/@RJStadium)

Super Bowl LV was lost in Kansas City before the Chiefs even left for Tampa.

In a game where last-minute distractions have catastrophic consequences — as 13-year veteran wide receiver Terance Mathis can attest — the defending champions were doomed to a 31–9 blowout by the Tampa Bay Buccaneers in what had been billed as a game for the ages.

Aside from the brilliance of Tom Brady and the Buccaneers, who were nearly flawless with the advantage of playing in front a home crowd, the Chiefs in the end could not shake the cloud of assistant coach Britt Reid’s car accident, which left a five-year-old girl facing life-threatening injuries at the time of kickoff.

So when the Chiefs took the floor at Raymond James Stadium on Sunday, they played without focus. It was clear Kansas City was not the team that had been the gold standard of the league for the last two years.

Reid, the 35-year-old outside linebackers coach for the Chiefs and the son of head coach Andy Reid, did not travel to Tampa with the team. A police investigation continues into a multi-car crash near Arrowhead Stadium in which he may have been impaired.

While the Chiefs did not make any excuses for their performance, they were a shadow of the team that had in the same building beaten the Bucs 27–24 on Thanksgiving weekend.

“My heart bleeds for everyone that was involved in the accident,” head coach Reid said in the few post-game comments he made about the incident. “We had put the game plan in the week before. From a human standpoint, it’s a tough one. From a football standpoint, I don’t think that [distraction] was a problem.”

Kansas City was held without a touchdown for the first time since Patrick Mahomes became their starting quarterback. His all-pro tight end Travis Kelce, who finished the game with 10 catches for 133 yards, also had a critical drop that would have extended an early first-half drive, setting Tampa up for another score.

The Chiefs defense also committed six of the team’s first-half penalties, leading to a 21–6 halftime deficit that effectively clinched the game.

Teams try to stay within a normal routine and avoid the distractions associated with the final game of the season. Yet the Super Bowl has been no stranger to off-field incidents that have had big impacts on games.

Prior to Super Bowl XXIII, Cincinnati Bengals running back Stanley Wilson had a drug relapse in Miami and went on a cocaine binge less than 24 hours before their game with the San Francisco 49ers. The Bengals went on to lose 20–16. It was Wilson’s third violation of the league’s substance abuse policy.

Wilson was banned for life after his position coach Jim Anderson found him high.

Tampa’s first and previously only Super Bowl win was also partially due to a mental health issue. Oakland’s all-pro center Barret Robbins, who battled depression, forgot to take his medication and went on a drinking binge in Tijuana, Mexico, after leaving the team hotel on Saturday night before Super Bowl XXXVII in San Diego. He was reportedly so incoherent that he actually thought the Raiders had already won the game. The Raiders deactivated him for the game and were crushed 48–21.

Eugene Robinson, an all-pro safety with the Atlanta Falcons, was given the Bart Starr Award — an honor for a player who displays high moral character — the Saturday prior to Super Bowl XXXIII.

He became a notorious culprit in a championship game loss when he was arrested by an undercover female police officer posing as a prostitute after he offered her $40 for oral sex. He then got burned by Denver Broncos receiver Rod Smith for an 80-yard touchdown reception that blew the game open in the second quarter.

“That was the first thing I saw on SportsCenter that morning [before the game],” said Mathis, who played for Atlanta in that game. “When my wife and I went downstairs to breakfast it was like a funeral instead of a meal before getting ready in the biggest football game of our lives.”

Mathis recalls how he and his wife prayed together before heading downstairs to meet the rest of the team early that morning. They vowed not to let the incident become a distraction.

He led the Falcons with eight receptions for 85 yards and scored a TD. But he says he still has one regret.

“After Eugene addressed the team and apologized, I wished I would have stood up and told the team to not be distracted,” Mathis said. “I don’t have any hard feelings toward Eugene, and we are still close today.”

Mathis also recalled how Falcons coach Dan Reeves devised a totally different strategy than what they had been playing on both sides of the ball. He was vocal with the coaching staff about the change in philosophy which forced them to ingest a totally different playbook in two days. That was one of the reasons that Robinson was out of position on Smith’s touchdown catch that broke the game open, he said.

It would take the Falcons nearly 20 years and an ownership change before they got back to the Super Bowl.

As the Chiefs lick their wounds while the Bucs bask in the afterglow of their championship, it’s an open question whether a potential dynasty crumbled due to another Super Bowl off-field incident that will go down in infamy — or whether another now beckons in central Florida.