I SAW THE SIEGE: ‘We Were Outnumbered’ On Capitol Hill, Says Congressional Aide

VIDEO: Michael McQuerry says going to work at the Capitol is "my own form of PTSD" because of the deadly riot on Jan. 6, 2021.
By André Johnson February 8, 2021
Facebook
Twitter
Linkedin
Email 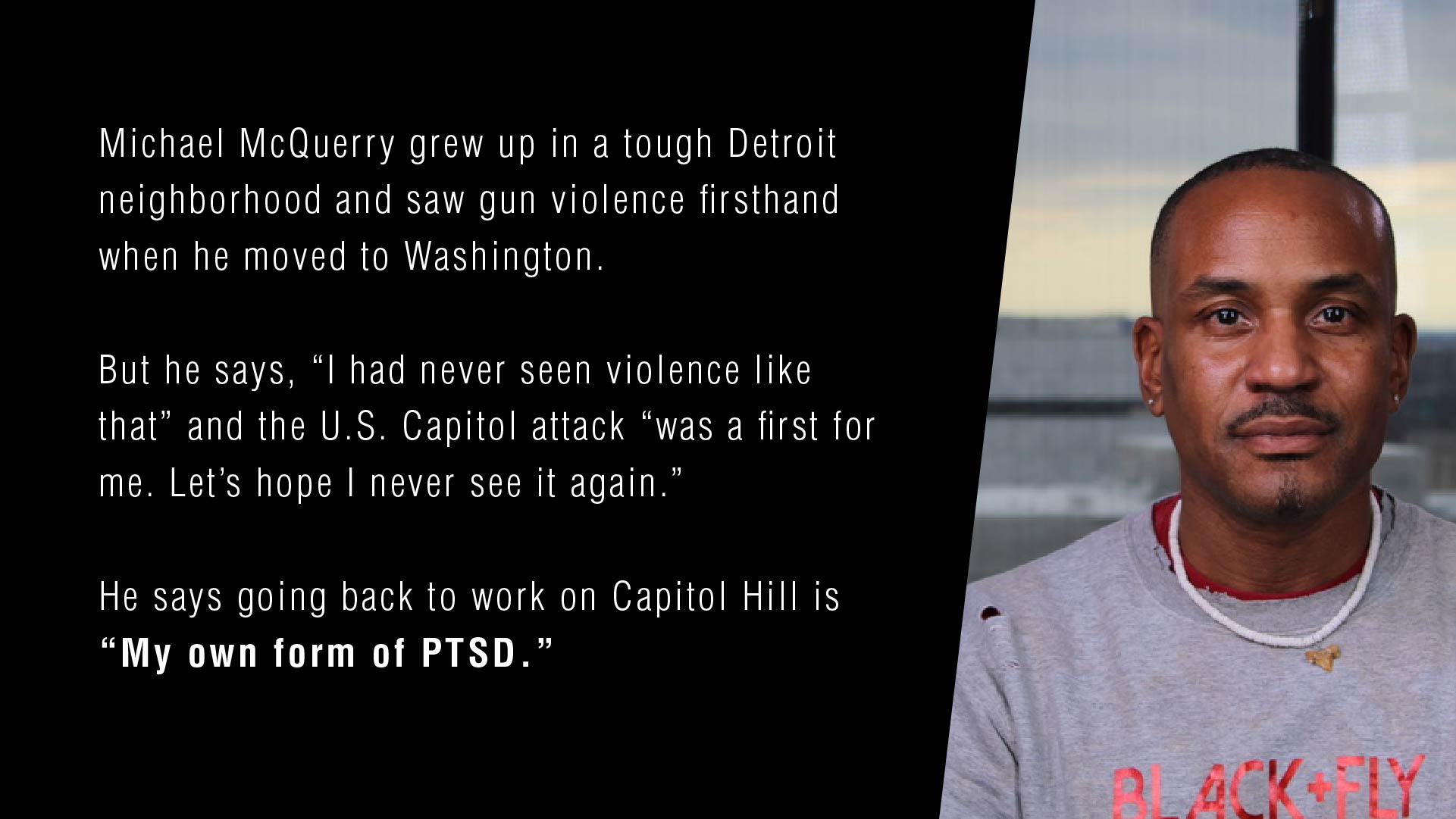 “I say a prayer every time I go to work and close that door” following the deadly Jan. 6, 2021 attack on the U.S. Capitol, says a congressional aide who watched it play out in person. Going to work today, he says, is “my own form of PSTD.”

“I have to make sure we get across what happened, the gravity of it,” he says. “I was there. I saw that. This is serious. We came this close to maybe losing the country. We can’t come that close again.”

COVID-19 pandemic precautions had left the Capitol mostly empty, says McQuerry, putting few people in harm’s way but also leaving most of the building undefended. “You have to realize, on a regular day that complex would have had 10,000 to 15,000 people in it,” he tells Zenger, “but because we were going through the pandemic you might have had 300 to 400 people at that time, who experienced that.”

“If you add that to Capitol police, and the number of people that came in, we were outnumbered,” he says.

McQuerry and his boss Del. Stacey E. Plaskett (D-USVI) both planned to be in the House of Representatives chamber for the reading of Electoral College votes, the final step in certifying the election victory of President Joseph R. Biden Jr. Plaskett is a nonvoting delegate from the U.S. Virgin Islands but still a House member. McQuerry planned to be in the gallery, social distancing but watching history play out. History had other ideas; he says he feared he would be “squashed.”

Even from the center of the bullseye, McQuerry couldn’t appreciate the urgency of the situation he was in. “I did not go to work that day thinking that an insurrection was going to happen. Who does? So we went to work,” he says.

“And we didn’t really get to see how bad, and how much danger we were facing until two days later, when all the videos came out and you saw people breaking the glass and doing things you could not imagine.”

A Detroit native, McQuerry says he thinks about how easily he could have become a casualty — inside the Capitol, not on the streets where he grew up. “I appreciate being alive,” he says, “because I could have been at the wrong place at the wrong time as easily not be sitting here talking to you.”

McQuerry has worked in Congress for 27 years, and knows every nook and stairwell. He thinks about Eugene Goodman, the U.S. Capitol Police officer who led the mob away from an open Senate chamber door. He took what he called “a symbolic walk” in those hallways before speaking with Zenger News.

“I took that walk over here from the side of the Senate floor where the police, the Capitol Police Officer, directed them another direction,” he says.

“I took that same walk that he took. And I just wanted to, you know, just to think about what was three weeks prior — the hatred that was in that building, in that dome, in a place that was built by African-American slaves.”

Click here to see the complete interview with Mr. McQuerry.