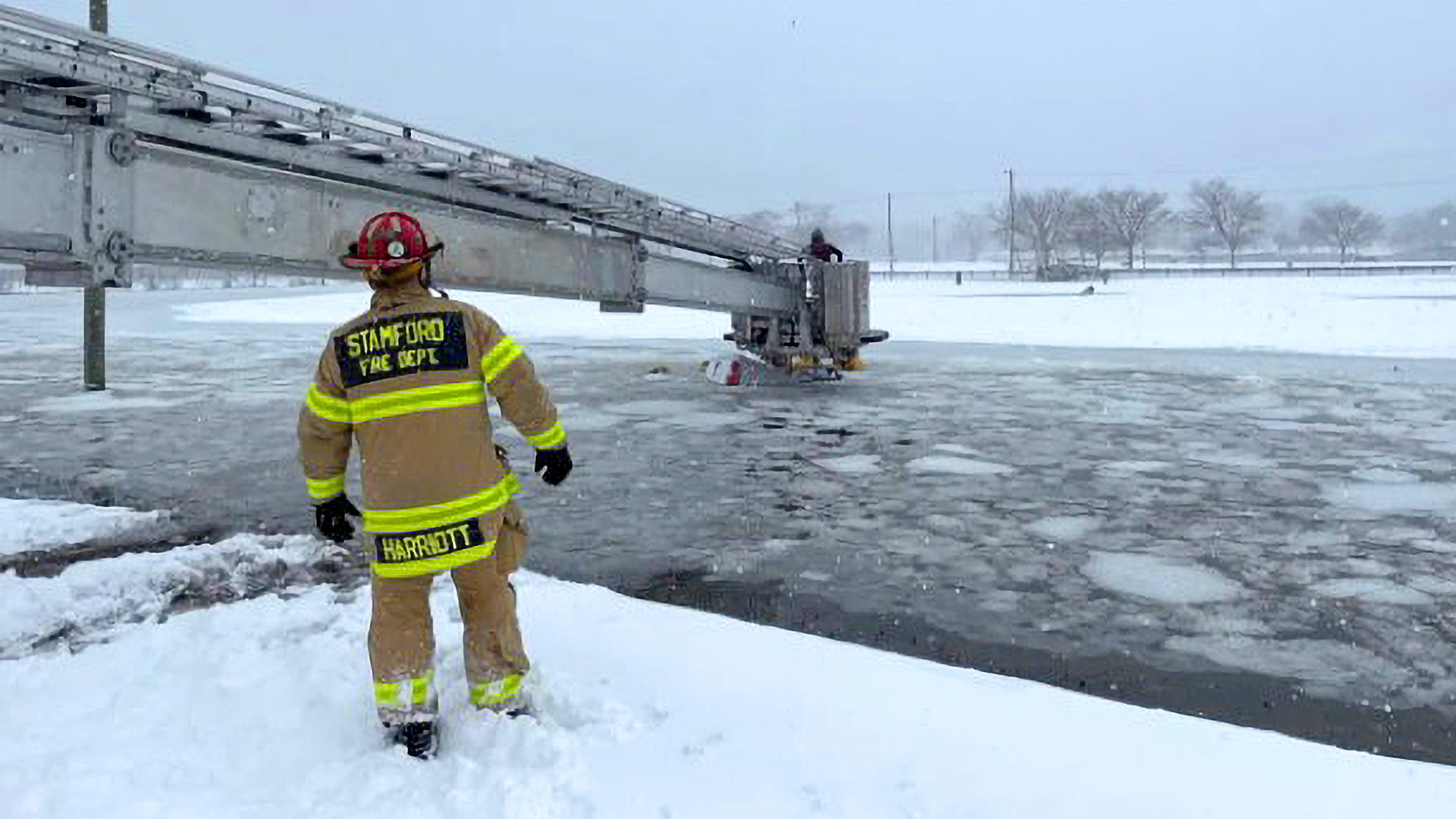 CONNECTICUT, USA – The firefighters of the Stamford Fire Department rescued two people trapped in their pickup truck while it was sinking into the freezing water. The incident took place on Feb 1, afternoon in the Rhode Island Sound strait of Cummings Park in the city of Stamford in the state of Connecticut.

The video footage shows that the four-door pick-up truck was partially submerged and floating approximately 40 feet from the shore. The female occupant was the first one to be rescued. While standing in the rear cargo area of the truck, she was shouting that there was a trapped man inside the submerged truck. The extreme weather conditions following strong winds, snow, and tide made it difficult for the firefighters to move the vehicle as it was filled with water.

The firefighters rescued the two victims with the help of a 100’ tower ladder truck positioned as close to the water’s edge as possible and stationed an aerial ladder out of their vehicle. The people were stranded in their white pickup truck in the middle of the Rhode Island Sound strait. They were assisted by the three firemen wearing rescue suits.

“The scuba drivers were also sent out to the sinking vehicle. They immediately dipped themselves into the water and swarm out to the truck’s location,” said Matt Palmer, deputy chief of Stamford Police Department.

With the deterioration of the weather condition, the vehicle continued to submerge deeper into the freezing water of the Long Island Sound. “We tried to pull the second victim out of a small rear window, but the man’s size made it very difficult,” said one of the firemen of the Stamford Fire Department.

A fireman kept a tight hold on the male victim’s arm and was able to pull him out through the small window. Later, the truck was completely submerged in the water.

The man was taken to the Stamford EMS Paramedics which is an emergency medical non profit organisation. Though he was conscious, he had some laceration. Later he was moved to Stamford Hospital. However, the women declined treatment at the scene.

No reports have been received about the man’s health current status. Whereas, the women reported to be in good health.

“The vehicle became stranded in the water during a dangerous winter storm and the tidal conditions in the area,” said Matt Palmer. Stamford Police Department. However, the incident remains under investigation by the police department.

Later, the crews of the fire department helped remove the vehicle from the water. No firefighters were injured in the incident.

Plamer congratulated his team on behalf of the Stamford Fire Department. “I very am proud of my team,” he said.