A Precarious Existence For The Cave Dwellers Of Torkham

People displaced by conflict find refuge near the Pakistan-Afghanistan border. 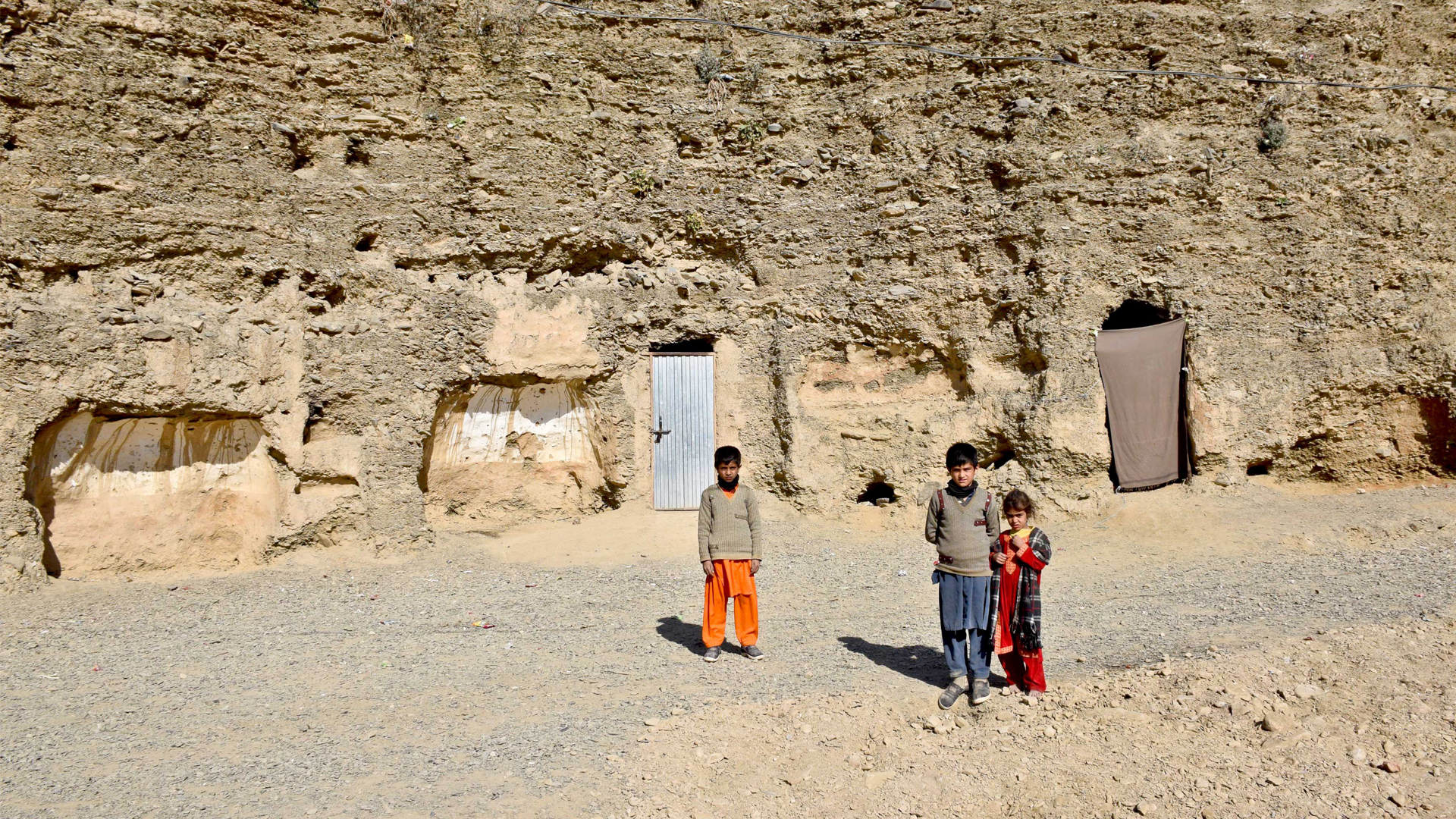 Mahgul Shinwari is as a daily wage laborer in Torkham, one of the major trade borders between Pakistan and Afghanistan.

The 35-year-old Afghan national, originally from Akeel-Khel village of Jalalabad, lives in a small cave in the Bacha Mena area of Khyber district. The cave, with barely enough room for two beds, is on a cliff about 300 feet high, accessible by a rugged, narrow path.

This community area of cave dwellers is about 5 kilometers (3.1 miles) from the Torkham terminal, a busy gateway between Pakistan and Afghanistan. The conditions are harsh, and most of the families live in a state of deprivation.

“An Afghan widow and her seven children live close by,” Shinwari said. “The kids collect garbage in Torkham and barely make enough to survive. The caves are in danger of collapsing and have developed cracks after the extreme rain and snowfall a month ago.”

Shinwari said that the lack of a water connection forces children to take a dangerously narrow path along the side of the cliff to get water.

“Women who are pregnant face severe difficulties in reaching medical assistance because of these narrow paths on the cliff,” he said.

In addition to all the other challenges, a precarious security situation on the border of Pakistan and Afghanistan keeps the cave dwellers in a state of constant anxiety.

“It was a horrible night for me and my family recently when suddenly bullets started flying everywhere. There was mortar shelling, so we were unable to step out, when it wasn’t safe to stay in either,” said Shinwari.

Khyber, which is in the former Federally Administrative Tribal Area of Pakistan, was one of the districts where military operations against anti-state elements have left thousands of households without shelter.

The majority of the people escaped to the caves for shelter and to avoid being sent to military camp.

“The land where the caves are situated belongs to different tribes in the Khyber district who have allotted them to the deprived families,” said Rahat Shinwari, a social activist from the district who recently distributed winter supplies to the families living in the caves.

“Here, families don’t have access to basic human rights like education and health. It’s the local tribes who support these families by providing them with solar electricity and groceries, medicine and clothes,” Rahat said. “Earlier, people were reluctant to support these displaced people, but over time the locals have started helping and showing empathy.”

Longtime residents of the area say that the caves are thousands of years old. The current residents have divided the caves into small living units with kitchens and toilets.

“The caves are cool in summer and warm in winter. While some are natural caves, other have been dug out in the rock face,” said Rahat.

Cave dwelling has a long history in Pakistan, and Khyber Pakhtunkhwa has some of the oldest caves in the country, said Naeem Khan, professor of archeology at the University of Peshawar.

The mountainous area is plentiful in rocks, precious stones and caves, said Khan. “Some caves are natural, while some have been modified and enlarged. Due to the war on terror, studies and research that was being carried out in the region was stopped. Therefore, the caves located in the other former agencies of FATA [Federally Administrative Tribal Area of Pakistan] were left undocumented and unidentified.”

Khan was part of a team that conducted a survey in the region in 2003.

Tangu Nau is in the former Mohmand Agency, around 30 kilometers (18.6 miles) from Peshawar, the provincial capital of Khyber Pakhtunkhwa.

The professor said that the caves in Khyber have considerable historical significance.

“The Khyber caves were used by the British during Anglo-Afghan War for strategic depth,” he said, and “were used to protect the Khyber Safari Railway service and also the Durand line.

“Some caves were used as a health unit to provide first-aid assistance to the British soldiers in 1948. The trading caravans of the time that took the Khyber Pass to reach Peshawar and also used these caves for resting.”