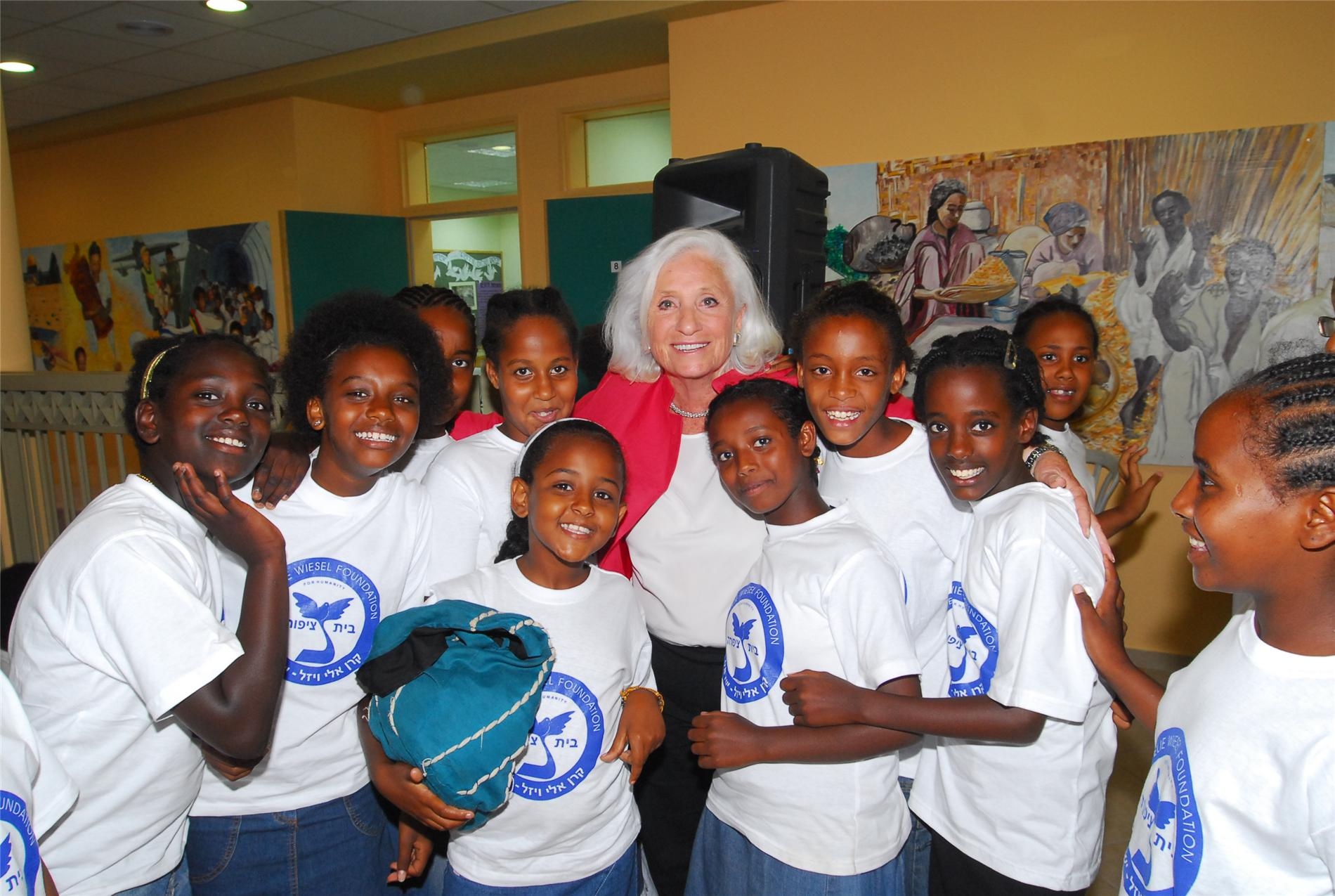 Marion Wiesel pictured with children at a Beit Tzipora Center in Israel in 2007. (Courtesy of the Elie Wiesel Foundation for Humanity)

Four decades earlier, before any of these future stars and statesmen had ever heard of their work, Marion and Elie Wiesel faced a dilemma.

In 1986, after Elie Wiesel was awarded the Nobel Peace Prize for being “a messenger to mankind,” French President Francois Mitterrand asked his friend and Wiesel’s wife Marion what they planned to do with the prize money.

“My husband said, ‘I don’t know. I haven’t thought about it,’ … and I said, ‘I would like a sailboat.’ They said that was crazy. We had to do something important,” recalled Marion Wiesel.

The humanitarian and activist couple’s post-Nobel Prize discussions boiled down to how they would advance their mission. As their son Elisha remembers it, Elie Wiesel wanted a platform to convene great minds to tackle issues of hatred and ignorance.

“Words were always my father’s way,” said Elisha Wiesel. “My mother, on the other hand, felt that it was great to try to tackle big picture issues with the words. But she believed in really hands-on programming for a population that she felt very connected to.”

She found that population in the Ethiopian children and families who were arriving in Israel.

Through the Elie Wiesel Foundation for Humanity, the Wiesels established Beit Tzipora Centers in Israel, foundations dedicated to providing education and enrichment opportunities for Ethiopian-Israeli children. Marion Wiesel served as the executive director and chairperson.

Now operated by the Women’s International Zionist Organization, the Centers collectively serve more than 700 children per year, assisting in admissions to universities or the military.

“It gives me great pleasure to see how these children react when they receive special attention and care,” Marion Wiesel said in an email. “They often come from large families and thus do not get all the attention they deserve. Beit Tzipora makes them feel special, which they are.”

As starry as the birthday celebration was, it was also a rare moment in the spotlight for a woman whose life has been as quietly remarkable as that of her husband, who died in 2016.

“She didn’t need the limelight, but she very much approved of and supported the limelight her husband received,” said Dr. Michael Berenbaum, Holocaust scholar, Director of the Sigi Ziering Institute, and a Professor of Jewish Studies at American Jewish University in Los Angeles.

“It’s also probably fair to say she pushed him into the limelight a little more than would have been in his own inclination. He was, on a certain level, shy and she was very instrumental in moving his career forward as a public figure.”

“From the moment he met Marion, he changed completely,” said Sommer, the founding U.S. president of the Women’s International Zionist Organization which now manages the Beit Tzipora Centers. “She gave him hope in the present and the future. Together the two of them managed to bring such understanding to the history of the Holocaust and the memory of the victims.”

“She really built him up to be Elie Wiesel, the Nobel Prize winner.”

A Jewish refugee from Europe herself and a civil rights activist, Marion Wiesel revisits her own history with some reluctance. As a young girl, Marion was forced to flee her homeland as the Nazis were entering Vienna. Her family traveled across Europe, finding shelter with an Italian family in Marseilles, spending time in a French prison camp and finally reaching safety in Switzerland.

Emigrating to America after the war, Marion became a proud NAACP member, as well as marching for civil rights and speaking out against discrimination in the segregated South. She was previously married to F. Peter Rose, with whom she had a daughter, Jennifer.

“We took her on a trip to Europe two years ago and we tried to recreate her path,” said Elisha. “We visited the apartment in Vienna that she grew up in. We went to the street corner where she and her father saw the Nazis march in. Even in Basel, where she was ultimately able to find a haven for the rest of the war, it was quite a bit of work getting her to open up and tell stories.”

“She made a conscious decision that there were bad memories and life is short. Why occupy herself when she came to this country and there was so much opportunity,” Elisha continued. “She didn’t want to dwell on the past and she always hated being seen as a victim.”

Nor did she have any tolerance for victimization of any other individuals.

When she came to the U.S., Marion believed that her new home “did not suffer from the same disease the old country suffered from.”

“But as I traveled through the United States, especially in the south in the mid-1950s, I realized how deep the differences in the quality of life, perceived and real, actually were for people of color,” Marion Wiesel said. “I was deeply disappointed.”

So she took action. As an activist, Marion made a practice of calling in hotel reservations under a name that sounded white. When she would arrive at the hotel with an African American friend, the young Jewish woman and black man would find their reservation had been lost.

On another occasion, when she tried to give up her seat on a bus to an elderly black woman, Marion was loudly reprimanded by the bus driver.

As they watched the recent protests over the killings of George Floyd and Breonna Taylor, Elisha Wiesel said his mother would stare at the TV screen silently shaking her head.

“She had a terrible reaction to seeing the knee of a police officer on the neck of an unarmed black man,” said Elisha Wiesel.

This same commitment to justice and equality inspired Marion to found the Beit Tzipora Centers.

Located in Ashkelon and Kiryat Malachi, The Beit Tzipora Centers are named after Elie Wiesel’s 7-year-old sister who was murdered in Auschwitz. In witnessing the plight of the Ethiopian refugees who were fleeing violence in Africa to find better opportunity in Israel, the home that they had dreamed of returning to, Marion Wiesel recognized parallels to the situations faced by European immigrants looking to escape the horrors of World War II. Marion wanted to encourage the Jewish state to serve as a model of racial equality and equal opportunity.

“I think when she saw the ability of Israel, which was as beloved a country to her as the United States, to not screw this up, to get it right from the very beginning, she felt what a great opportunity to try to fix a problem before it happens,” said Elisha Wiesel. “Let’s see what we can do from the very beginning.”

At home in New York, Marion Wiesel waits out the COVID-19 pandemic with regular family visits.

A voracious reader, she has also worked her way through “House of Cards” and “Fauda” on Netflix, and she has a special fondness for her cats, Moshe and Duffy. Post-pandemic, Elisha Wiesel said the family might consider a trip to the South to inspire her to share new memories.

Until then, if history holds true, Marion Wiesel will likely keep an eye on the world through a lens of hope even in an atmosphere where hope would seem to be in short supply.

“During the riot at the Capitol where you saw people with a Camp Auschwitz t-shirt and 6MWE [6 million wasn’t enough] on a Proud Boys t-shirt, you would think these things would strike deep fear and terror into her heart,” said Elisha Wiesel. “Those shirts filled her with disgust, not fear. If we were to probe her and ask why, I think it would be because we have a state of Israel.”

“We didn’t have that in the 1940s when my family needed somewhere to go, and a strong state of Israel is the best guarantee in the world than there will never again be an Auschwitz to consume six million Jews,” she said. “I think that’s a very big part of her world view.”