Once a common song bird, the critically-endangered yellow-breasted bunting is on the verge of extinction
By Jitendra Choubey February 5, 2021
Facebook
Twitter
Linkedin
Email 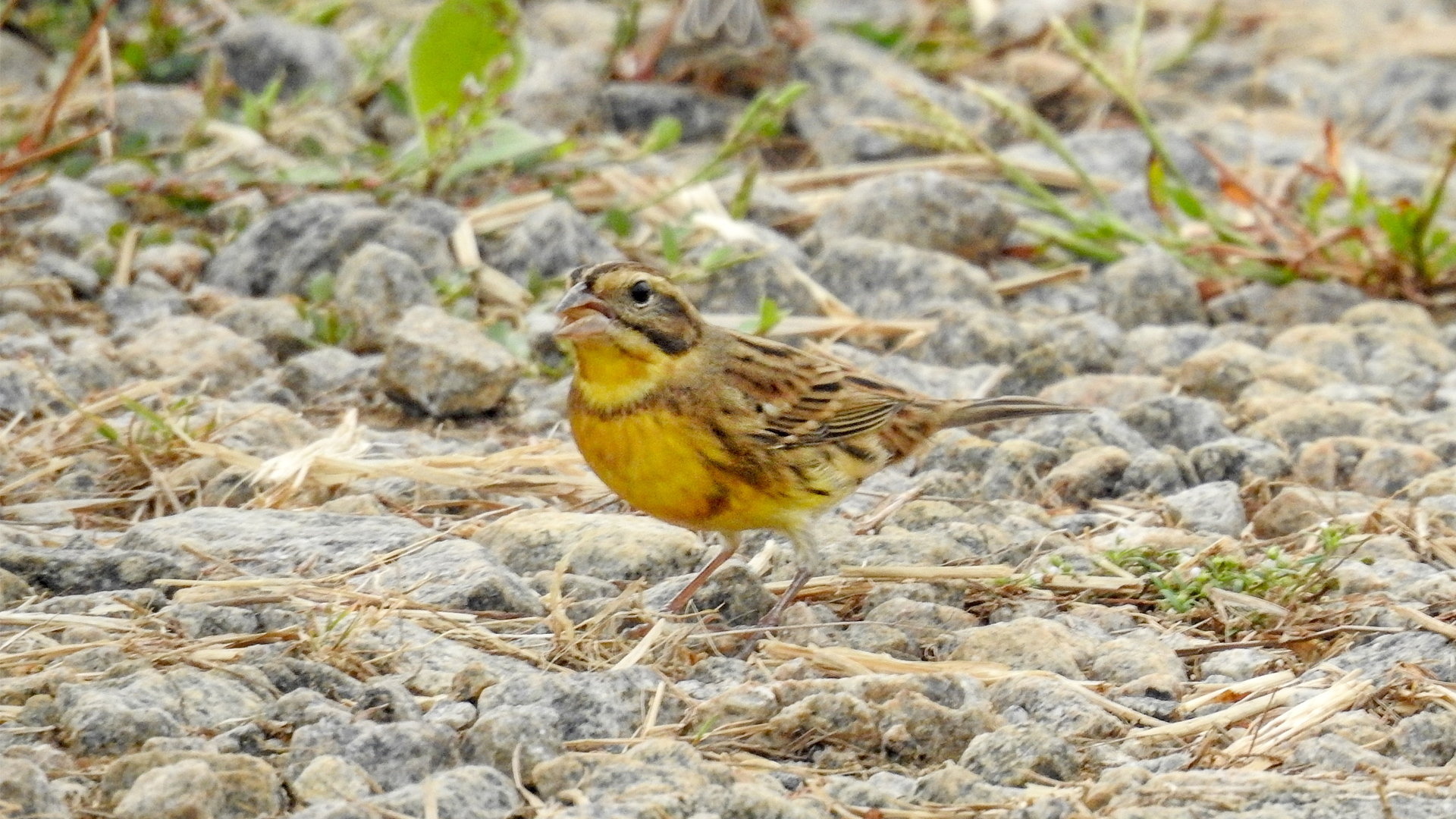 A yellow-breasted bunting at a paddy field at Jokatte, Karnataka in December 2020. (Vivek Nayak)

NEW DELHI — Vivek Nayak, a bird-watcher in Mangalore, a coastal city in southern India, was surprised when he saw a critically-endangered bird — the yellow-breasted bunting (Emberiza aureola) — at a rice field in Jokatte in early Dec. 2020.

The bird that looks like a sparrow with a stout beak and yellow breast is popularly known as a “rice bird” in China.

“It was unbelievable that this exotic bird had reached this region,” said Nayak. He took photos of the birds and uploaded them on the open-source website Ebird.

The yellow-breasted bunting thrives in temperate zones and used to be one of the most abundant songbirds. Its breeding area stretched from Finland to the Pacific coast to Siberia and north Japan.

Traditionally, in winter, the bird migrates to south-east China, Thailand, Cambodia, Myanmar and then enters the northeastern Indian states like Arunachal Pradesh, Manipur, Meghalaya, Assam, and Sikkim. They are sometimes sighted in mountainous Himachal Pradesh in northern India. During migration, they congregate in large flocks in wet grasslands and rice fields. 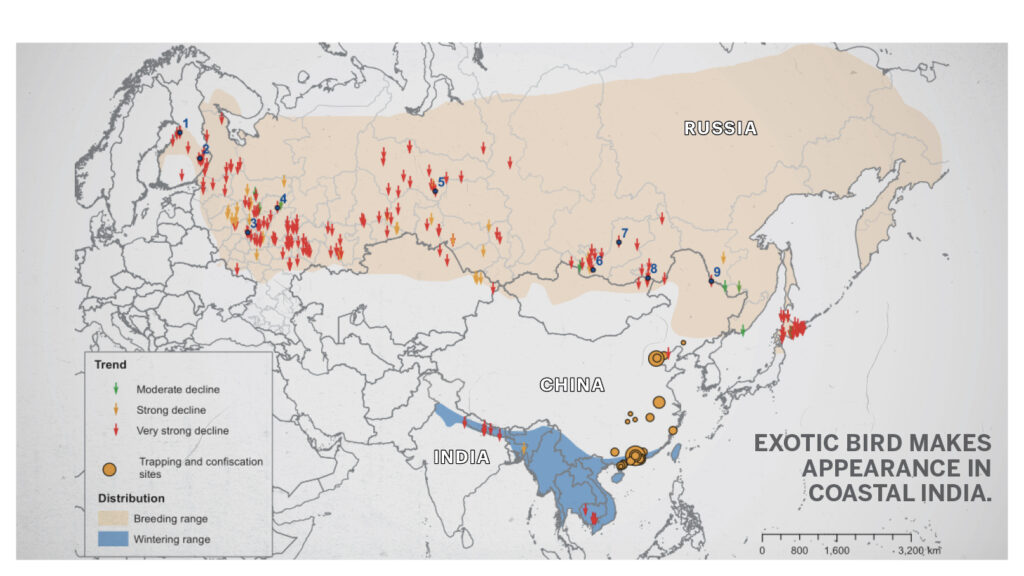 Sighting of the yellow-breasted bunting in India’s coastal areas has surprised birders and ornithologists. Besides Mangalore, the bird has been sighted in other southern regions. According to Ebird, in 2019, it was sighted in Kerala’s Kunnoor district, and in 2015, it was spotted in Goa.

Birders from northeast India are surprised why the bird has deviated from its traditional migratory path to explore terrain in the southern and western coasts.

“In last few years, there has been no sighting of the yellow-breasted bunting in Assam. They used to visit Assam and other northeast states in large numbers in winter,” said Jaydev Mandal, an Assam-based birder and assistant professor at Gauhati University.

Ranju Chetri, Ph.D. research scholar at the North-Eastern Hill University, had started a research project on the bird but discontinued it when she did not find enough specimens to study in northeast India.

“I visited the Dibru-Saikhowa National Park and Tiger Reserve, and the Maguri Motapung Beel wetland in Assam in 2015 and 2016, but I couldn’t find a single yellow-breasted bunting,” said Chetri.

The International Union for Conservation of Nature (IUCN) listed the yellow-breasted bunting as a critically-endangered bird species in 2015. Till 2004, it was in the category of “least concern.”

The population of the bird “likely consisted of hundreds of millions” in the 1980s, according to a paper. The population declined by 84.3-94.7 percent between 1980 and 2013 mostly due to illegal trappings in China, the paper said.

China banned the hunting of the birds in 1997, but it didn’t have much of an impact on illegal hunting.

“The bird is considered a delicacy and there has been no significant reduction in its consumption even after the ban,” said Chan.

The yellow-breasted bunting has also been seen at Cocos Island in the Indian Ocean, an Australian territory, in late December 2020.

“It was the first time that the bird was spotted anywhere in Australia,” said Chan.

Experts are baffled why the bird suited to mountainous, colder climes is moving to warmer regions.

“The loss of habitat in the Himalayan region may be a reason,” said Mandal.

Much of northeast India practices shifting cultivation (jhum) where large tracts of forest is burned every year for the cultivation of paddy. Sometimes, it leads to uncontrolled forest fires that impact the habitat of birds.

“In the last decade, the intensity of jhum cultivation has increased in the region. Earlier, they used to burn small patches of forest but now it has increased four-fold, causing large scale habitat destruction,” said Chetri.

“Some yellow buntings may have ‘strayed’ with a flock of another species, but regular sightings in certain geographies need to be scientifically studied before reaching any conclusion,” said Asad Rahmani, former director, the Bombay Natural History Society.

“A rise in the frequency of cyclonic activities over the Bay of Bengal could have led to these occurrences.”

In the last five years, there has been a 32 percent rise in cyclonic activities in India’s coastal belt.

Sometimes, during a cyclone, birds are swept into a region by wind currents. For instance, when the eastern Indian state of West Bengal was struck by the Amphan cyclone in May 2020, many exotic birds were blown to the land masses.

Changing routes of migratory birds cause invasive species of plants to be introduced in a region. Invasive species outnumber native flora and fauna, causing a threat to biodiversity.

“Migratory birds transfer species of flora when migrating from one place to another through their excreta,” said Sudipta Kumar Das, post-doctoral fellow, Centre of Excellence in Integrated Omics and Computational Biology, Utkal University.

«Previous Post
Tomb Savers: The Monument To Lost Love Built Decades Before The Taj Mahal»Next Post
Fall Of The Wild: The Urbanization That Has Silenced Karachi’s Birdsong